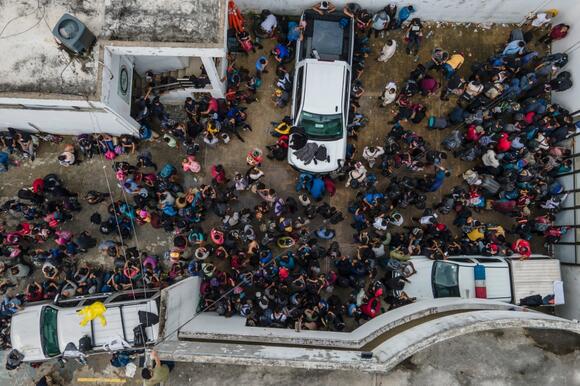 COATZACOALCOS, México (AP) — Mexican authorities discovered more than 400 migrants transiting the country in the back of two semi-trailers Friday, not far from where two migrant caravans were more visibly, and slowly, making their way north.

The migrants were held by authorities in a walled yard until federal immigration agents could retrieve them.

“There were more than 400,” said Tonatiuh Hernández Sarmiento, of the Veracruz Human Rights Commission, after visiting the migrants. “Some were very dirty, covered in mud, I imagine because of the conditions of the containers … the overcrowding. I imagine that because of the heat they were really wet.”

There were children, pregnant women and ill people among them, he said.

While the caravans of hundreds of migrants walking by day together up highways draw more attention, the clandestine flow of migrants who pay smugglers for direct trips to the U.S. border continues.

The leaders of Mexico, the United States and Canada discussed immigration during meetings in Washington Thursday at the North America Leaders’ Summit. Their statements after the meetings were positive and optimistic, but light on details.

The three countries agreed to increase the paths for legal migration, for example with more visas for temporary workers. They also pledged to expand access to protective status for migrants and to address the causes that lead them to migrate, but did not offer hard numbers or timelines.

“It wasn’t something substantial, I see it as stagnant, there aren’t advances,” said Alejandra Macías, director of the nongovernmental organization Asylum Access Mexico.

Maureen Meyer, vice president for Latin American Affairs at the Washington Office on Latin America, a human rights organization, said that their reaffirming of migrants’ and asylum seekers’ rights is positive, “but actions on the ground, particularly in Mexico and at the U.S.-Mexico border, continue to violate the rights of migrants, deny them access to protection, and allow crimes and human rights abuses to occur with impunity.”

The migrant caravan currently in Veracruz is the first to advance so far in the past two years, because since 2019, security forces have stopped and dissolved the caravans.

This time, the Mexican government used the offer of humanitarian visas to diminish the caravan’s numbers as it slowly moved north, but some have remained suspicious and continued walking. Some migrants who received the documents have reported being swept up by authorities in the north and returned to Tapachula near the Guatemala border.

That’s why Abel Louigens of Haiti decied to join the caravan that left Tapachula on Thursday with some 2,000 other migrants.

“They give you a paper, but only for Tapachula,” he said. “You can’t travel all over Mexico, you can’t catch a bus to look for work, but in Chiapas there’s no work.” He said he would settle wherever he could find work in Mexico and only enter the U.S. legally. “I can’t risk them sending me back to my country.”

send these criminals right back to where they came from,,we don't need uneducated,people that are carrying diseases like covid people that don't wear a mask,people that have no money to support themselves,,we do not owe them anything

Send them back to where they came from! We don’t want them here! Why do they think we want to support them? We don’t! Come legally or don’t come at all!

Nabeel Younis and his friends had been in a migrant detention center for a month after being arrested by Mexico's National Guard for illegally trying to cross the border between Tijuana and San Diego.
IMMIGRATION・4 DAYS AGO
Border Report

Border Patrol agents from Laredo have arrested several migrants who were found smuggled inside a railcar near Hebbronville, Texas, U.S. Customs and Border Patrol reported.
TEXAS STATE・8 DAYS AGO
Gazette

Hundreds of U.S.-bound migrants in caravan stuck at Guatemala border

TEGUCIGALPA (Reuters) -Hundreds of Hondurans and Nicaraguans on Saturday reached the Guatemalan border but were prevented from crossing by Guatemalan security forces, the first such U.S.-bound migrant caravan to be formed this year in Central America. Some migrants at the Izabel border crossing in Guatemala threw objects at Guatemalan security...
IMMIGRATION・18 HOURS AGO

Inside a migrant caravan leaving Honduras

Hundreds of men, women and children gathered early Saturday morning in the parking lot of San Pedro Sula's main transit hub, on the edge of the northern Honduran city. The last caravan to leave San Pedro Sula was in January 2021, and contained about 7,000 people.
IMMIGRATION・12 HOURS AGO
The Independent

Hundreds of migrants set off from Honduras toward US border

Some 600 migrants hoping to reach the United States set off in a caravan Saturday from the northern Honduran city of San Pedro Sula Hundreds of young men, women and children, most from Nicaragua Honduras and Cuba had gathered overnight and early morning at the city's central bus station.Shortly after dawn, they set out walking toward the Guatemalan border in hopes that travelling in a group would be safer or cheaper than trying to hire smugglers or trying on their own. A smaller second group soon joined.Fabricio Ordoñez, a young Honduran laborer, said he had joined the...
IMMIGRATION・14 HOURS AGO
tpr.org

The U.S. government is quick to displace blame when migrants die attempting to cross the U.S.-Mexico border. “The argument that the government makes is that ‘migrants do this to themselves, it's not our fault that people die in the desert,’” said anthropologist Jason De León. “But what I've been arguing for a long time is that we have a policy in place. It's called Prevention through Deterrence. It weaponizes the desert. It forcibly pushes people towards places like the Arizona desert or the South Texas backwoods, so that folks will have to walk for days and days.”
IMMIGRATION・1 DAY AGO
erienewsnow.com

Border patrol agents have rescued 25 undocumented migrants from a locked trailer in Texas where they were left in the cold with no way to escape. Big Bend Border Patrol Sector officers in Sierra Blanca found the migrants Wednesday morning with some of them shivering from the cold and crying, CBP said in a news release.
TEXAS STATE・6 DAYS AGO

YUMA, Ariz. – Arizona border cops are sounding the alarm on an increasingly violent situation at the Southern border. "This isn’t a war, this isn’t something we are going to win," Maj. Damon Cecil from the Arizona Department of Public Safety told Fox News. "Honestly, if we were looking at winning this, we’d be having to take the fight to where the enemy is, which is across the border."
YUMA, AZ・9 DAYS AGO
Reuters

MEXICO CITY, Jan 5 (Reuters) - The United States on Wednesday began returning migrants to the Mexican city of Tijuana in an restart of a Trump-era program that forces asylum seekers to wait for U.S. court hearings in Mexico, Mexican authorities and the U.N. migration agency said. The United States...
IMMIGRATION・10 DAYS AGO
Newsweek

"The U.S.-Mexico border is so intertwined that whatever happens on the one of the sides is going to affect the other," said one migration analyst.
BUSINESS・11 DAYS AGO
Washington Times

The old model of illegal immigration along the southern border was shattered in 2021, according to data released by the Department of Homeland Security this week that shows the demographics of the typical border jumper have been completely rewritten. Mexicans, who for decades represented the overwhelming number of illegal immigrants,...
IMMIGRATION・10 DAYS AGO
Border Report

U.S. Embassy in Tijuana says only 30 MPP applicants will be sent back each day to wait in border city

A representative from the U.S. Embassy in Mexico told migrant advocates and those who operate shelters in Tijuana that the Migrant Protocols Program will ramp up over the next few weeks.
IMMIGRATION・10 DAYS AGO
Border Report

After disappearing for almost a month, Pakistani migrant turns up at Tijuana detention center

Migrant from Pakistan, missing for weeks, who fled that country because he was Catholic, has been located in migrant detention center in Tijuana.
CALEXICO, CA・11 DAYS AGO
Border Report

MEXICO CITY (AP) — The number of people applying for refugee or asylum status in Mexico almost doubled between 2019 and 2021, reaching a historic high of over 130,000, authorities said Monday. While there was a dip in 2020, that was largely due to the coronavirus pandemic. In previous years, migrants from other countries had […]
IMMIGRATION・11 DAYS AGO
Border Report

JUAREZ, Mexico (Border Report) – After an arduous months-long journey, dozens – perhaps hundreds – of Haitian citizens have made their way to Juarez intent on crossing the U.S. border or finding work in Mexico. The Haitians can be seen walking downtown, working on sidewalk stalls in the Market District and melting into neighborhoods near […]
IMMIGRATION・17 DAYS AGO
Border Report

EL PASO, Texas (Border Report) – Unauthorized migration is shifting toward southwestern Arizona, where local authorities recently declared a state of emergency. Migrant encounters are up 2,404.9% during the first two months of the 2022 fiscal year in the Yuma Sector of the Border Patrol, according to recently updated U.S. Customs and Border Protection data. […]
ARIZONA STATE・18 DAYS AGO
Daily Beast

CIUDAD JUÁREZ, Mexico—In the dead of night this fall, 12 migrants left the small northern Mexican town of Coyame to enter the vast Chihuahuan desert, with the hopes of crossing into the U.S. by way of the Texas border. Among them was a 14-year-old boy from Southern Mexico who was dreaming of reuniting with his family on the other side of the border.
PUBLIC SAFETY・24 DAYS AGO