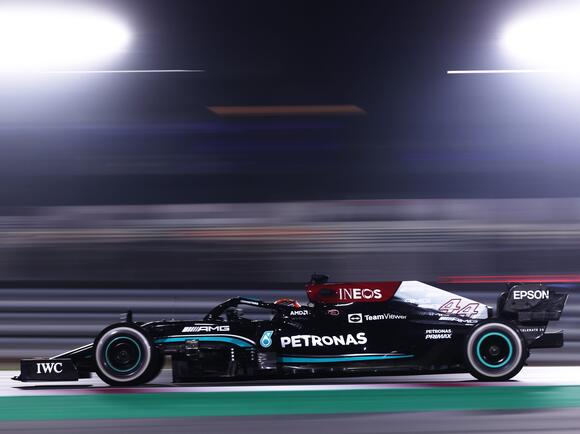 With just two races to go, the most exciting F1 title battle in years has swung once again, with Mercedes springing a late charge and firmly grasping the momentum away from Red Bull.

If you were to go back two races to the aftermath of the Mexican Grand Prix, Mercedes and Lewis Hamilton 's chances seemed to be fading without a whimper.

Championship leader Max Verstappen had just won his ninth race of the season, further extending the gap between him and Hamilton, and was close to mathematically sealing the title.

Since then, however, Hamilton has reminded everyone why he is widely regarded as one of the greatest drivers in F1 history, and why he's pushing for a record eighth title.

Having seemingly always been a step ahead for the majority of the season, it is now Red Bull who are now struggling to keep up.

In Brazil, Hamilton was hit with a five-place grid penalty and a disqualification but still fought back to finish first by 10 seconds. In Qatar, he secured pole and never relinquished the lead, eventually finishing 25 seconds ahead of Verstappen.

Back-to-back victories mean Hamilton has cut the deficit at the top to just eight points. Should he win the final two races of the season, then he will move past Michael Schumacher as the driver with the most world titles.

Drivers battle on track while their bosses bicker on the sidelines

The tension has not been reserved solely for the track though.

Earlier in the season, Red Bull team boss Christian Horner said how much he enjoyed winding up his opposite number Toto Wolff, and for a while, it seemed to be working.

At the Brazilian Grand Prix, Wolff was heard saying: "Fuck them all," to Hamilton on the team radio, while he was also seen shouting aggressively and pointing at TV cameras focused on him when his driver overtook Verstappen for the lead.

Just a week later, however, Wolff appears calmer and it is Horner who seems to be under the pump.

During the Qatar Grand Prix, Verstappen was given a five-place grid penalty for failing to slow down under yellow warning flags during qualifying. Horner was not happy with this and blamed it on a marshal.

The stewards took a dim view of this, officially warning him. Wolff described Horner's comments as "naughty."

Horner has also tried his best to halt Mercedes' progress. The team threatened to protest over Mercedes' rear wing, claiming it was the secret behind a "hidden" way of boosting the team's straight-line speed.

Rather than react to the threat of a protest, Wolff has promised more is to come.

The so-called "super engine" that saw Hamilton rise from 10th to win in Brazil was taken out for last weekend's Qatar Grand Prix, but Wolff said it will be back for the next race in Saudi Arabia.

"Saudi should be a good track for us, but we know this year when you think it's a good one it can turn the other way around," he told Sky F1.

​​"But it's a long straight, we'll get our spicy equipment out for Saudi Arabia that we didn't use [in Qatar] and hopefully Valtteri [Bottas] is right up there, we need him. But in any case, if everyone finishes the race it will go to Abu Dhabi."

While Verstappen still holds the title lead, it could well be that after the Saudi Arabian Grand Prix, Hamilton is either just one or two points behind the Dutchman, or even level.

In that scenario the season finale at the Yas Marina circuit in Abu Dhabi, a track where Hamilton has won five times and Verstappen has won once, will be a straight shootout. Whichever driver finishes ahead of the other will win F1's greatest prize.

Lewis Hamilton’s future remains unresolved as the new Formula 1 season draws closer. The Briton has maintained radio silence since being left “disillusioned” with the FIA over how the title-deciding race in Abu Dhabi controversially unfolded last year, with Max Verstappen’s win branded “unsatisfactory” by Damon Hill this week. Mercedes reportedly want race director Michael Masi to stand down as a result and team chiefs and the FIA are said to have met in London this week for a one-hour summit to discuss several outstanding issues. McLaren team principal Zak Brown admitted Hamilton’s return shouldn’t be taken for granted...
MOTORSPORTS・2 DAYS AGO
The Independent

Toto Wolff does not think that Lewis Hamilton will ever “get over” the controversial ending to the 2021 Formula 1 season.Hamilton was denied a record-breaking seventh world title after Max Verstappen passed him on the final lap of the season’s final race in Abu Dhabi. Verstappen had been afforded the opportunity to line up an overtake after the intervention of race director Michael Masi, who permitted lapped cars between the title rivals to un-lap themselves, clearing a path for the Red Bull driver to snatch his first Drivers’ Championship.Revealing that he and his team had been left “disillusioned” with...
2 DAYS AGO
FanSided

Formula 1: It’s time for Lewis Hamilton, Mercedes to shut up and race

Mercedes and seven-time Formula 1 world champion Lewis Hamilton have been in a snit since the 2021 season ended, but it’s time for them to focus on 2022. Since the heartbreaking and dramatic end to his 2021 Formula 1 season, Lewis Hamilton has made just one public appearance, and that was to be knighted. Even a Formula 1 legend has to show up when the crown comes calling.
MOTORSPORTS・2 DAYS AGO
The Independent

Martin Brundle believes that Toto Wolff is aware that his lobbying of Formula 1 race director Michael Masi was “unacceptable” during the Abu Dhabi Grand Prix.With fans able to hear discussions with the race director for the first time, the controversial conclusion to the 2021 season saw both Mercedes principal Wolff and his Red Bull counterparts attempting to influence Masi’s decisions. Masi has since been criticised for allowing cars between title rivals Lewis Hamilton and Max Verstappen to unlap themselves, setting up the chance for Verstappen to snatch both race and Drivers’ Championship victory in the final lap.Brundle, who raced...
MOTORSPORTS・2 DAYS AGO

Other than the dramatic and intense title dual between Mercedes Lewis Hamilton and 2021 world champion Max Verstappen, the dominance in car performance Mercedes and Red Bull cars had over their rival teams stood out the most. The top 3 finishers in constructers championship, Mercedes at P1, Red Bull at P2 and Ferrari at P3, showed how having big financial backing is important to peruse championship in F1.
23 HOURS AGO
SkySports

George Russell is relishing his big Formula 1 chance this season and Lewis Hamilton will have his hands full battling his young Mercedes team-mate for the title, believe the Sky Sports F1 pundits. In a partnership that pitches a rising F1 superstar against the sport's most successful and famous driver,...
MOTORSPORTS・1 DAY AGO
The Independent

Sports stars and clubs across the world continue to provide an insight into their lives on social media.Here, the PA news agency looks at some of the best examples from January 19.TennisAndy Murray served Naomi Osaka a compliment. And she returned it.Anyone put their heart on their sleeve and fight harder than @andy_murray ? 🥺🙏🏾🔥 https://t.co/c6G2SA2Ycx— NaomiOsaka大坂なおみ (@naomiosaka) January 19, 2022Osaka was feeling arty.Lol omg 😂💀 https://t.co/SeYxBn0avu— NaomiOsaka大坂なおみ (@naomiosaka) January 19, 2022Serena had a battle on her hands.[xdelx]Denis Shapovalov struggled with a banana!Sometimes the struggle is real 😅 Sorry, @denis_shapo 🍌#AusOpen • #AO2022• #AOTennis pic.twitter.com/NYtCJkQYss— #AusOpen (@AustralianOpen) January 19, 2022Madison...
2 DAYS AGO

Mercedes and Red Bull have agreed terms on the move from Brackley to Milton Keynes of Ben Hodgkinson, the new technical director of Red Bull Powertrains. The two teams reached an agreement that will see Hodgkinson join Red Bull Powertrains in late May of this year. Red Bull poached Mercedes...
MOTORSPORTS・19 HOURS AGO
Autosport Online

The Milton Keynes-based squad, which has set up its own engine facility in the wake of Honda's withdrawal from F1, announced a number of high-profile signings from Mercedes last year. In April, Hodgkinson was announced as the new technical director, but it was unclear when he would be able to...
MOTORSPORTS・19 HOURS AGO
The Independent

The competition in Formula 1 will be closer with multiple cars expected to be in the mix in 2022, according to an FIA chief.Regulation changes have been introduced for the upcoming season to improve the aerodynamics of the car and teams like Alfa Romeo and Haas could capitilise. Head of Single Seater Technical Matters at the FIA, Nikolas Tombazis, says he expects those underdog teams to challenge for race wins.“It is difficult to expect it to be more exciting than [2021] because that is a very high point of reference,” said Tombazis, quoted by Autosport. “But I think once there’s...
22 HOURS AGO
MarketWatch

An Australian Grand Prix boss says the Formula 1 won’t have a visa situation like Novak Djokovic’s and says the country’s entry rules are “simple”.Questions are being raised in every sport in Australia which requires athletes to travel to the country after the tennis player was deported after his visa was cancelled. But the GP’s CEO Andrew Westacott has reassured fans a similar incident won’t impact the event, which will take place on 10 April.“We’ve worked very closely with the Victorian government throughout 2021 and in the lead up to 2022,” he said. “And of course we’ve worked very, very...
TENNIS・1 DAY AGO
gtspirit.com

Hagerty reviewed some of the most influential auction sales of 2021 and the list they came up with was rather interesting. A 1995 McLaren F1 which was sold by Gooding & Company at Pebble Beach in August 2021, the vehicle was sold at a final price of £15.5m and the sale broke a world record price for an F1 sold at a public Auction.
9 DAYS AGO