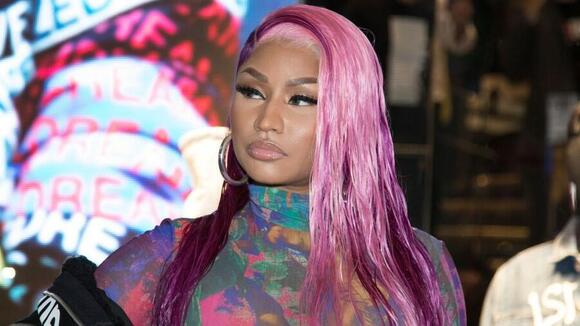 Nicki Minaj wasted no time getting to the tea for the part three of the Real Housewives of Potomac reunion. In a short clip from Sunday night's episode, the "Yikes" rapper, who recently scored her first diamond record , spent the evening in Andy Cohen's seat, grilling the girls about their season 6 shenanigans on the hit Bravo show.

Before getting into the mix, the star assured the ladies that " I wouldn’t be here if I didn’t love and respect you, okay? I love the show." In one clip, Nicki addresses cast member Ashley Darby, and calls out the housewife for not having a storyline, asking:

"My first question is, Ashley: First of all I want to say I love seeing you with your boys. But to me, because you had just had a baby and you wanted to be home, rightfully so, with your babies, it seemed like you didn't have much of a storyline. So is that why you were willing to be Gizelle's sidekick and be shady to Wendy."

The head Barb also mentioned that she may talk to Candiace about her music career, adding:

As Andy shared his excitement about Minaj sitting in the host seat and giving her unfiltered opinion, the rapper joked:

"Everybody hear that? So don't be telling me that I did my job wrong — Andy gave me permission that I can take sides"

A woman who sued Nicki Minaj and her husband for allegedly harassing and intimidating her after she accused him of sexual assault has dropped her claims against the rapper – and the star’s attorney is already vowing to seek penalties for the “appalling” lawsuit. Jennifer Hough...
CELEBRITIES・9 DAYS AGO
HipHopDX.com

If there’s one debate that gets rap fans talking, it’s the topic of who belongs on the Mount Rushmore of Hip Hop. A “Big Four” of Atlanta rappers featuring Jeezy, Future, Lil Baby and Rich Homie Quan left Outkast, T.I., Gucci Mane and 2 Chainz fans livid last year, while Snoop Dogg had a tough time narrowing down his “Mount Eastmore” picks.
CELEBRITIES・8 DAYS AGO
Popculture

The harassment suit aimed at Nicki Minaj by her husband Kenneth Petty's sexual assault accuser has been dismissed by a judge. TMZ reports Jennifer Hough voluntarily dismissed the case against the rapper on Wednesday –– without receiving any sort of financial settlement to dissolve the situation. Nicki's husband...
CELEBRITIES・9 DAYS AGO
popwrapped.com

PopWrapped has been following the accusations against Nicki Minaj and husband Kenneth Petty following a case which began in 2021. Updates below. Trigger: This article does mention sexual assault and rape. August 2021, Nicki Minaj was hit with a harassment lawsuit in which Jennifer Hough initially came forward with accusations...
CELEBRITIES・2 DAYS AGO

Nicki Minaj is reportedly in the clear in regards to the harassment lawsuit brought forth against her by Jennifer Hough. New documents from the lawsuit have surfaced online from The Jasmine Brand reportedly showing that Hough voluntarily dropped it, although Nicki’s husband’s case is still pending. Court documents...
CELEBRITIES・9 DAYS AGO
AceShowbiz

Jennifer Hough, who claims that she's raped by Kenneth in 1994 when she's 16 years old, reportedly drops the case without 'any sort of financial settlement reached.'. AceShowbiz - Nicki Minaj's battle against Kenneth Petty's accuser isn't over just yet. Although Jennifer Hough voluntarily dropped her harassment lawsuit against the couple, the "Anaconda" hitmaker reportedly will still fight for her money lost in their legal dispute.
CELEBRITIES・9 DAYS AGO
Complex

Nicki Minaj has secured a legal win. As pointed out by various outlets, Jennifer Hough has voluntarily dismissed her harassment lawsuit against the Queen rapper. Hough’s attorney confirmed the move Wednesday, months after she sued Nicki and her husband, Kenneth Petty. “The case was voluntarily dismissed as to Nicki...
CELEBRITIES・9 DAYS AGO
97.9 The Box

It seems that Nicki Minaj can breathe a sigh of relief. Jennifer Hough has dropped the harassment lawsuit against her. As spotted on Complex the Queens, New York native got some good news regarding some potential legal troubles that originated with her husband Kenneth “Zoo” Petty. On Wednesday, January 12 Jennifer Hough’s lawyer confirmed that his […]
CELEBRITIES・9 DAYS AGO

After facing some hardships, New York's Lady London is making a confident return to the music industry with Lady Like: The Boss Tape. The 13-track new arrival sees the rapper – who is "proficient in almost everything," according to her Instagram bio – sample songs from Drake, Nicki Minaj, Erica Banks, and more.
MUSIC・7 DAYS AGO
thatgrapejuice.net

Barely a week after headlines rang across the Web that a lawsuit against rapper Nicki Minaj and her husband Kenneth Petty had been voluntarily dropped by Jennifer Hough, the woman who sued the couple on allegations of harassment and witness intimidation, new reports are indicating the latter’s legal team is looking to pick up the fight again – this time on a new battleground.
CELEBRITIES・1 DAY AGO
HipHopDX.com

After Jennifer Hough voluntarily dismissed her harassment lawsuit against Nicki Minaj in New York on January 12, Hough has reportedly refiled to move the suit to California, where Nicki and her husband Kenneth “Zoo” Petty call home. According to Rolling Stone, Hough’s attorneys explained the reasoning behind the...
CELEBRITIES・22 HOURS AGO
iHeartRadio

The Barbz were quick to jump online when it was announced that Jennifer Hough's lawsuit against Nicki Minaj was dismissed, but Rolling Stone reports that the rapper's legal woes aren't over just yet. Back in August 2021, Hough, Minaj's husband Kenneth Petty's alleged rape victim, filed a lawsuit against the rapper. In 1994, Hough claimed that Petty attacked and raped her at knifepoint. Petty reportedly took a plea deal to a lesser charge of attempted rape and served four years in prison.
CALIFORNIA STATE・15 HOURS AGO
Reality Tea

Kanye West Thanks Kylie Jenner And Travis Scott For Helping Him Find Daughter Chicago’s Birthday Party; Kim Kardashian Denies That She Is Keeping Kanye From Seeing His Kids

Oh, what a tangled web the Kardashian family weaves. Keeping Up With The Kardashians star Kim Kardashian may be divorcing rapper Kanye West, but their love lives are dominating the headlines. That is just what momager Kris Jenner wants with the new Kardashian series for Hulu supposedly already filming. Kanye, who changed his name to […] The post Kanye West Thanks Kylie Jenner And Travis Scott For Helping Him Find Daughter Chicago’s Birthday Party; Kim Kardashian Denies That She Is Keeping Kanye From Seeing His Kids appeared first on Reality Tea.
CELEBRITIES・2 DAYS AGO
Popculture

Rumors continue to run rampant about the upcoming season of Celebrity Big Brother. According to The Sun, Real Housewives of Beverly Hills alum Teddi Mellencamp is supposedly being considered for the series. The publication reported that she is "in talks" to join the show, which will premiere on CBS on Wednesday, Feb. 2.
TV & VIDEOS・5 HOURS AGO
goodhousekeeping.com

Lisa Bonet will turn 54-years-old this year and yet she somehow looks the same age as her 32-year-old daughter, Zoë. The actress who got famous for her role as Denise Huxtable on “The Cosby Show” and “A Different World," she most recently starred in the TV series "Ray Donovan" as Marisol Campos. You likely also know her because of her relationship to Lenny Kravitz, Zoë's dad. But enough about that, back to her ageless complexion.
CELEBRITIES・25 DAYS AGO
Bossip

Isn’t She Married? Shamea Morton Tooted Up & Twerked Her Taken Cakes For Actor Tyler Lepley & Got Slammed For ‘Embarrassing’ Her Husband

Recurring 'Real Housewives Of Atlanta' star Shamea Morton rubbed some folk the wrong way after a video surfaced of her dancing in front of 'Harlem' actor Tyler Lepley, leaving a blog's comment section in disarray.
CELEBRITIES・2 DAYS AGO
StyleCaster

Following the news of their shocking split, fans are wondering why Jason Momoa and Lisa Bonet broke up after 16 years together. While the former couple didn’t personally divulge many details about the reason behind their split, it seems Bonet may have been dropping some subtle hints about the decision in an interview published just weeks before their announcement. Bonet—who secretly tied the knot with Momoa in 2017 after more than a decade together—shares daughter Lola and  son Nakoa-Wolf with the Aquaman star. The former couple announced their split in January 2022. In an Interview magazine feature published exactly a month...
CELEBRITIES・3 DAYS AGO
E! News

Watch: Jason Momoa & Lisa Bonet Split After 4 Years of Marriage. A plot twist no one saw coming. Jason Momoa and Lisa Bonet announced they are separating after more than a decade together. In a joint statement released on Jan, 12, the former couple wrote on Instagram they are "parting ways in marriage."
CELEBRITIES・9 DAYS AGO
The Independent

A woman has thanked one of her fellow gym members for not staring at her as she does squats, and she is sparking a debate on social media for doing so.In a TikTok video posted on 1 January, @libbychristensen was squatting on an exercise machine, as a man was sitting on a bench behind her. @libbychristensen ty for your service kind sir #gymtok #girlwholift #YerAWizard ♬ The Golden Girls - The Main Title Theme - TV Themes “I just need to shout out this man who was behind me while it was hack squatting bc I...
WORKOUTS・2 DAYS AGO