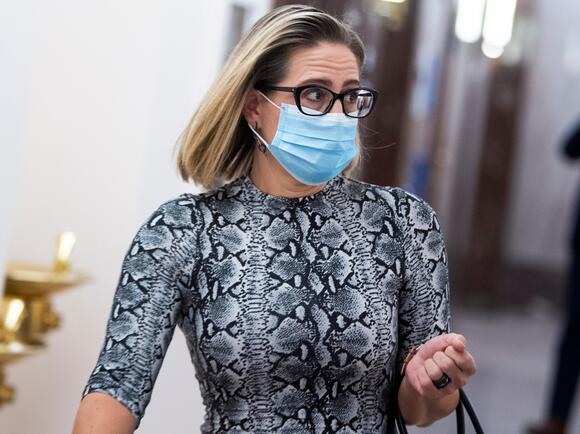 The Times reported that House Speaker Nancy Pelosi set up a back channel in September with Sinema and Sen. Joe Manchin of West Virginia, a pair of centrists with outsize sway over Biden's economic agenda. Democrats can't lose either of their votes for the spending plan to become law in the 50-50 Senate.

The paper reported that Sinema signaled in late September — through a friend, former Rep. Joe Kennedy of Massachusetts — that she would pull her support of the larger social spending, health, and climate plan if Pelosi didn't act swiftly to pass the infrastructure plan.

At the same time, progressives were refusing to vote on the infrastructure bill without the social spending plan. This stalemate prompted Pelosi to yank a vote scheduled for September 30.

Sinema's office did not respond to a request for comment.

The infrastructure plan focused on roads and bridges eventually cleared the House with some GOP support earlier this month, with Biden signing it into law last week. House Democrats approved the Build Back Better Act on Friday morning on a party-line vote, barreling past united GOP opposition.

That measure would establish universal pre-K for 3- and 4-year-olds and extend monthly cash payments to most American families for another year. It would expand Medicare to cover hearing services, enact four weeks of paid family and medical leave, initiate federal control over prescription-drug prices, and provide child-care subsidies. Democrats want to pay for it with tax increases on the richest Americans and large firms.

The legislation is now headed to the Senate, with the prospect of more showdowns over taxes, paid leave, and the planned Medicare expansion. Senate Majority Leader Chuck Schumer said he wanted Senate Democrats to pass it by Christmas.

Neither Sinema nor Manchin has given the package a thumbs-up, and Manchin said he didn't see any urgency in approving the social spending bill by year's end.

I pray Senima sinks this disastrous bill. It will destroy this country, like they haven't already done it!!! Things are terrible now it will get so much worse!!!

spending g too much money on. social. programs is the problem. peop,people, are not working to ride the gravy train. as long as iden is in the WH he will continue with the freebies.

This article originally appeared at Common Dreams. It is licensed under a Creative Commons Attribution-Share Alike 3.0 License. Feel free to republish and share widely. On what would have been Martin Luther King Jr.'s 93rd birthday, voting rights advocates and progressive lawmakers rallied in Arizona on Saturday to target the first-term Democratic senator blocking legislation aimed at strengthening ballot access amid growing GOP-led suppression efforts.
PRESIDENTIAL ELECTION・1 DAY AGO
Business Insider

Jason Furman also pushed back on Joe Manchin's case that Biden's big bill would worsen inflation, calling it "a bad reason" to oppose the measure.
BUSINESS・1 DAY AGO
The Independent

Another Martin Luther King Day has come to pass without voting reform, but if Democrats have their way, that won’t be the case for long.Congressional Democrats have been pushing for years to expand voting access to little success, and had hoped to get a package of legislation named for civil rights icon and US representative John Lewis done by this MLK Day.Those hopes were dashed when senators moved a planned MLK Day vote back because of a massive snow storm in Washington and Hawaii senator Brian Schatz coming down with Covid.The Senate is back in session on Tuesday, where...
CONGRESS & COURTS・9 HOURS AGO

The MyPillow founder made the remarks at Trump's Arizona rally, where many speakers touted conspiracy theories about the 2020 election.
PRESIDENTIAL ELECTION・1 DAY AGO
The Guardian

Puzzle of Biden’s unpopularity has some pieces within his control and some not, experts say, as Covid casts a shadow over his first year in office
PRESIDENTIAL ELECTION・1 HOUR AGO
The Independent

It was a brutal week for the Democratic Party’s various factions as it became clear ahead of Martin Luther King Jr Day that the passage of voting rights legislation remains unlikely thanks to two Democratic senators, Joe Manchin and Kyrsten Sinema.As the president descended on Capitol Hill in an attempt to press the two on their resistance to alterations to the Senate’s filibuster rule, Ms Sinema took to the floor and delivered a speech outlining her continued refusal to make any changes to the rule even as unified Republican opposition means that passing legislation to combat gerrymandering and bills to...
CONGRESS & COURTS・11 HOURS AGO
USA TODAY

Democrats came up short on MLK day promise. What's next for the push for a voting rights bill?

Democrats remain intent on bringing a voting rights bill up for a vote after a week when their efforts to move the legislation forward were stymied.
PRESIDENTIAL ELECTION・22 HOURS AGO

Democrats have been trying to push forward voting rights legislation that Senate Republicans have been stalling through a filibuster.
CONGRESS & COURTS・1 DAY AGO
San Diego Union-Tribune

Senators are returning to Washington under intense pressure to pass voting legislation in the face of stark criticism from civil rights leaders
PRESIDENTIAL ELECTION・3 HOURS AGO
iPower 92.1/104.1 FM

"I think anyone with common sense would be reluctant to go talk to this committee," the GOP congressman said.
CONGRESS & COURTS・1 DAY AGO

"If we do not protect the vote with everything that we've got, we will not have a country to protect going forward," the House majority whip said Sunday.
CONGRESS & COURTS・1 DAY AGO
TheAtlantaVoice

A day before the U.S. Senate was expected to take up significant legislation on voting rights that is looking likely to fail, Martin Luther King, Jr.’s eldest son condemned federal lawmakers over their inaction. Speaking in Washington, D.C. on Monday, Martin Luther King III said though he was marking the federal holiday named for his […] The post On MLK Day, King III implores Senate to act on voting rights appeared first on The Atlanta Voice.
ATLANTA, GA・8 HOURS AGO
blackchronicle.com

It took just one tweet for the leader of the nation’s oldest civil rights organization to at once both expertly troll a Democratic U.S. Senator vehemently opposed to advancing voting rights legislation and point out the hypocrisy of her stance at the same time. Derrick Johnson, who as president...
CONGRESS & COURTS・3 HOURS AGO
MarketWatch

Representative Adriano Espaillat said "much must be done to push these two senators to line up and be in lock-step with our leadership."
CONGRESS & COURTS・2 DAYS AGO
Business Insider

Sen. Tim Kaine says most recent version of spending bill is 'dead' but 'the core of the bill' will likely pass

"Even the White House economist is using the past tense when referring to Build Back Better. It's dead," CBS's Margaret Brennan told Sen. Tim Kaine.
RICHMOND, VA・1 DAY AGO
Washington Post

More than a year since Rep. Abigail Spanberger (D-Va.) first put forth legislation that would ban members of Congress from trading stock, a flurry of action in the Senate in recent days has injected some momentum into the proposal. While it’s traditionally tough to get Congress to police itself, Spanberger...
CONGRESS & COURTS・18 HOURS AGO
The Independent

Hillary Clinton has invoked Martin Luther King Jr’s criticisms of “the white moderate “ in what appeared to be a thinly- veiled rebuke of Democrats Joe Manchin and Kyrsten Sinema after they rejected President Joe Biden’s urgent demands to change Senate filibuster rules that block passage of federal voting rights legislation.In a message on Twitter, the former Democratic presidential candidate quoted the late civil rights leader’s “Letter from a Birmingham Jail,” in which he rebuts “unjust laws” as well as “the white moderate” with a “shallow understanding” of injustice.“I had hoped that the white moderate would understand that law...
CONGRESS & COURTS・2 DAYS AGO