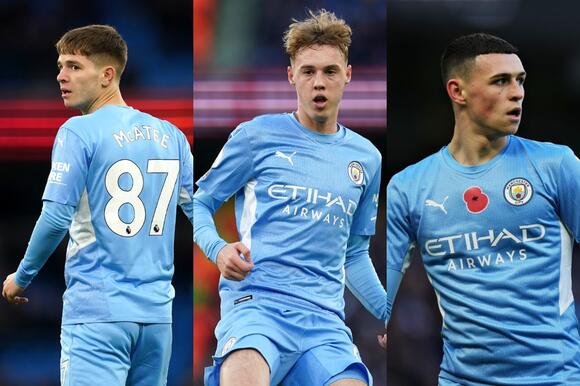 The Sky Blues were at their dominant best, as they reduced the gap between themselves and the top of the Premier League table to three points with a convincing win against the Toffees.

The 19-year-old was positioned down the middle by Pep Guardiola, as he partnered Raheem Sterling and fellow Manchester City academy graduate Phil Foden in an all-English frontline.

Pep Guardiola even gave the impressive youth academy attacking midfielder James McAtee his Premier League debut late on, as the Salford-born teenager replaced Palmer with less than five minutes left on the clock.

Despite having just come on, McAtee went on an incredible run on the edge of the penalty area on the stroke of full-time, causing havoc among the Everton backline all on his own.

This led former Manchester United captain Gary Neville to pay his ex-club's local rivals the ultimate compliment for how the club's academy system has worked in favour of their first-team in the past few seasons.

In commentary for Sky Sports, Neville said, "It (Manchester City's academy) is not an academy, it’s a cloning system. They’re like clones, they’re all the same. It’s almost like David Silva’s left them all behind."

The David Silva parallel is testament to how well-drilled Manchester City's young guns are, with much credit going to training with the first-team and learning from the senior squad under the stewardship of Pep Guardiola and his staff.

While Phil Foden has been a first-team regular for more than a year, Palmer slotted in right from the off despite being asked to fill in up top by Guardiola, while McAtee saw himself compared to David Silva after featuring for less than 5 minutes of normal time on Sunday.

Ralf Rangnick praised Harry Maguire for producing a performance befitting the captain’s armband on his return to the Manchester United starting line-up.The world’s most expensive defender has been under close scrutiny this season, both for his displays in the heart of defence and leadership of the team.Maguire missed the first two matches of 2022 with a chest injury and was named on the bench against Aston Villa and Brentford as Rangnick favoured Victor Lindelof alongside Raphael Varane.But the United skipper was restored to the starting line-up against West Ham in the absence of Lindelof, who was supporting his family after...
PREMIER LEAGUE・1 DAY AGO
The Independent

What the papers sayThe Manchester Evening News says Jesse Lingard is looking to secure a loan move away from Old Trafford in the January transfer window. The 29-year-old midfielder has made just nine Premier League appearances this season, and it is believed Newcastle are interested in a potential loan deal.Brentford are finalising a deal for former Tottenham midfielder Christian Eriksen, according to the Daily Mail. The 29-year-old’s contract is reportedly for six months with an option for a one-year extension, however it all hinges on whether Eriksen completes his medical following his collapse during Denmark’s Euro 2020 match against Finland...
PREMIER LEAGUE・1 DAY AGO

Virgil van Dijk insists Liverpool are paying no attention to Manchester City despite closing the gap on their Premier League title rivals.A hard-fought 3-1 win at Crystal Palace on Sunday lifted the Reds to within nine points of Pep Guardiola’s side, who were held to a 1-1 draw away to Southampton on Saturday.City have played a game more than Liverpool and the Merseyside outfit are set to visit the Etihad Stadium in April, leaving plenty to play for.“You can’t deny it’s in your mind, but as we have said many times we take it game by game,” Van Dijk said...
PREMIER LEAGUE・1 DAY AGO
The Independent

Pep Guardiola believes record signing Jack Grealish delivered “by far” his best performance in a Manchester City shirt during Saturday’s 1-1 draw at Southampton Playmaker Grealish is yet to consistently hit top form for the Premier League leaders since arriving for £100million from boyhood club Aston Villa last summer.The England international, who has managed only two top-flight goals and a couple of assists this term, was unable to inspire City to victory on the south coast as their remarkable winning run ended at 12 games.He cut a frustrated figure at times and was involved in a first-half flash point with...
PREMIER LEAGUE・1 DAY AGO
CityXtra

On Friday, a flurry of reports from both Argentina and England claimed that Manchester City were in talks to sign Julian Alvarez from River Plate, with the 21-year-old out of contract in December. The centre-forward, who recorded 39 direct goal involvements in 46 appearances for River Plate in 2021, has...
PREMIER LEAGUE・2 DAYS AGO

What a game that was from Diego Simeone's men, trailing 2-0 before scoring three goals in the second half – including two in stoppage time – to claim all three points. An epic, monumental comeback. Whew! Take a breather, everyone. Has this been the most Atletico Madrid game...
PREMIER LEAGUE・2 DAYS AGO
The Independent

Liverpool moved to within nine points of Manchester City at the top of the Premier League table with an entertaining 3-1 win over Crystal Palace at Selhurst Park.Virgil van Dijk gave the visitors the lead in the eighth minute, thumping a bullet header beyond Vicente Guaita from an Andy Robertson corner. And Liverpool’s dominance was rewarded with a second shortly after the half hour mark when Robertson crossed for Alex Oxlade-Chamberlain to bring down and fire home at the back post.Palace finally got a foothold in the game towards the end of the first half and continued that urgency after...
PREMIER LEAGUE・1 DAY AGO
Metro International

MANCHESTER, England (Reuters) – Manchester City’s seemingly unstoppable charge to the Premier League title slowed slightly as they were held to a 1-1 draw at Southampton on Saturday, snapping a 12-match winning sequence that had distanced their rivals. Manchester United moved into the top four of the Premier...
PREMIER LEAGUE・2 DAYS AGO
SB Nation

Manchester City’s 12 match winning run ended on the south coast as they came from behind to draw at Southampton. Aymeric Laporte’s second half header secured a point for City after Kyle Walker-Peters had given the Saints a first half lead. City already have a formidable lead at...
PREMIER LEAGUE・2 DAYS AGO

Manchester City travel to the south coast on Saturday evening to try and extent their lead at the top of the Premier League by beating Southampton.Saints held Pep Guardiola’s men to a goalless draw back in October but today’s visitors have been in scintillating form in recent months, winning their last 12 consecutive league fixtures and building up a lead of 11 points to second-placed Liverpool and 14 to Chelsea in third.Kevin De Bruyne’s superb curling finish was enough to secure victory over the Blues last time out, and the Belgian could start up front at St. Mary’s with Raheem...
PREMIER LEAGUE・2 DAYS AGO
CityXtra

Pep Guardiola's side went into this afternoon's Premier League clash with the opportunity to extend their lead at the top of the table to 14 points. However, second place Liverpool do have two games in hand. It was the hosts who started the brightest, stretching City's backline, with Kyle Walker-Peters...
SOCCER・2 DAYS AGO
CityXtra

Despite Joshua Wilson-Esbrand making just one appearance so far this season for Manchester City's first-team squad, the promising young left-back is held in high regard by the majority of the club's fanbase. This admiration comes as a result of his impressive debut against Wycombe Wanderers in the Carabao Cup earlier...
PREMIER LEAGUE・3 HOURS AGO
The Independent

David De Gea hopes Manchester United’s “unbelievable” stoppage-time winner against top-four rivals West Ham will be the moment that kickstarts their campaign.Long since out of the Premier League title race, the FA Cup and Champions League remain the Red Devils’ only route to silverware having been knocked out of the Carabao Cup by Saturday’s opponents.That win in September was West Ham’s first at Old Trafford since 2007 and David Moyes was unable to mastermind another memorable triumph at his former club on Saturday afternoon.Ralf Rangnick’s side looked comfortable for the most part but it took a last-gasp strike from substitute...
PREMIER LEAGUE・2 DAYS AGO
CityXtra

As Sergio Aguero found the exit door at the end of last season, many supporters at the Etihad Stadium were expecting a breakthrough campaign for rising forward Liam Delap, after an impressive 2020/21 season. However, much to the disappointment of many - none more than Delap himself, the 18 year-old...
PREMIER LEAGUE・23 HOURS AGO