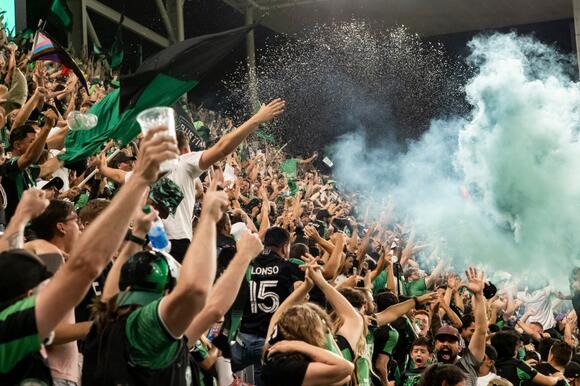 AUSTIN (KXAN) — Verde and Black will be back in Q2 Stadium in a few months.

Austin FC will host FC Cincinnati at 5 p.m., Feb. 26 in its 2022 season opener after finishing 12th out of 13 teams in Major League Soccer’s Western Conference in its inaugural season.

Team officials said broadcast details will be released closer to the start of the season.

In its inaugural season, Austin FC was the only team to sell out all 17 of its home matches, the club said. Austin FC had an average attendance of 20,738, the fifth-highest in the league.

Austin FC began its first season with eight away matches as construction wrapped up at Q2 Stadium. The club played its first match at home June 19 against the San Jose Earthquakes and picked it up its first home win in emphatic fashion, a 4-1 win over the Portland Timbers on July 1.

Next season’s opener will be the first-ever match between the two clubs and just the third time Austin FC will play a team from the Eastern Conference. FC Cincinnati was the league’s worst team in 2021, finishing with just four wins and 20 points in the 14-team conference.

February weather forecast and 3-month outlook released: What to expect in Central Texas

AUSTIN (KXAN) — We’ve now passed the halfway point of meteorological winter and also the typically coldest time of the year in Central Texas. On Thursday, the Climate Prediction Center released its first February weather outlook and updated its three-month outlook further into spring. February is the final...
AUSTIN, TX・1 DAY AGO
KXAN

AUSTIN (KXAN) — Central Texas’ first, good taste of wintry weather since last February’s rounds of winter storms is in the forecast later this week. We want to make sure you are aware of what to expect as well as how to prepare for this particular event.
AUSTIN, TX・3 DAYS AGO
KXAN

What were weather conditions when the Bastrop County controlled burn began?

BASTROP COUNTY, Texas (KXAN) — A controlled burn in Bastrop County turned into wildfire Tuesday, burning more than 780 acres as of Wednesday afternoon. Officials say it is 30% contained. Below is a breakdown of weather conditions prior to the controlled burn from KXAN’s First Warning Weather team.
BASTROP COUNTY, TX・2 DAYS AGO
KXAN

KANSAS CITY, Mo. (AP) — The Chiefs were going nowhere on offense against Pittsburgh early Sunday night, so coach Andy Reid had wide receiver Mecole Hardman take a shotgun snap and hand off to running back Darrel Williams on a trick play. Their exchange hit the ground, T.J. Watt...
NFL・5 DAYS AGO

The U.S. men's national team finalizes its roster for the next three matches of CONCACAF World Cup qualifying as it prepares to play on freezing pitches.
MLS・8 HOURS AGO
KXAN

Austin FC will host Atlas FC at Q2 Stadium for a friendly preseason match next month, the team announced Thursday. The match will take place Wednesday, Feb. 16 at 8 p.m.
MLS・8 DAYS AGO
KXAN

Austin FC went heavy on defense, focusing two of its three picks in the 2022 MLS SuperDraft on defensemen.
MLS・10 DAYS AGO
KXAN

Austin FC announced Monday that Pochettino will go to Club Atletico River Plate, a team based in Argentina, on a one-year loan with an option to buy his contract outright afterward. Pochettino is from Argentina and played for Talleres, one of the best clubs in the Argentine domestic league. He was signed as a Designated Player and occupied one of the team's international roster spots.
MLS・11 DAYS AGO

Austin FC will play four preseason matches next month as the team gets ready for the upcoming 2022 MLS season.
MLS・3 DAYS AGO
KXAN

How To Prevent Sports Injuries With Texas Children’s Hospital

Because a child’s bones, muscles, brain, and other organs are different than an adult’s, they respond much differently to injuries, stress, and athletic training, as well as require comprehensive, specialized treatment. Shauna M. Butler, M.D. at Texas Children’s Pediatrics joined Studio 512 Co-Host Rosie Newberry to tell us...
HEALTH・2 DAYS AGO
counton2.com

FC Cincinnati have re-signed midfielder Haris Medunjanin to a contract through the 2022 season, with a club option for 2023, the club announced today. Medunjanin, a five-year MLS veteran and 20-year professional, has spent the past two seasons with FC Cincinnati. Medunjanin first signed with Cincinnati after he was chosen...
MLS・2 DAYS AGO
wbrc.com

BIRMINGHAM, Ala. (WBRC) - Birmingham Legion FC will welcome Atlanta United to Protective Stadium Sunday, February 20. The Major League Soccer club comes to the Magic City for a pre-season friendly. This match will mark the time Legion FC plays in Protective Stadium, their new home. “This exhibition is a...
MLS・1 DAY AGO
Sports Illustrated

Matt Turner's rapid rise could continue with a move to the Premier League.
PREMIER LEAGUE・1 DAY AGO
Cincinnati CityBeat

It's just about time to hit the pitch. FC Cincinnati shared its pre-season schedule last week. Now, fans can get ready to attend something a little closer to home. Single-match tickets to FC Cincinnati's home matches at TQL Stadium are on sale now, starting at $25. Regular seats plus special hospitality suites and experiences are available throughout the season.
MLS・2 DAYS AGO
Dallas News

FRISCO — It’s only the third day of preseason, but already you can see the changes new FC Dallas coach Nico Estévez is making. Really. You don’t need to be a soccer expert to see the difference. While training sessions still look like a bunch of...
MLS・1 DAY AGO
KXAN

Get Glowing Skin With Help From Letty Lamont Of Letty Woman

Letty Lamont of Letty Woman Med Spa joined Steph and Rosie to discuss some ways we can get glowing skin even in the dead of winter. Letty will be focusing on growing her girl gang, but her main focus continues to be optimizing skin health and building collagen to give her clients the longest lasting results. This is not a race it’s a journey. Letty says, “Collagen induction and maintenance is the key to youthful natural looking results. Look out for new treatments with platelet rich fibrin, a thicker version of PRP, more advanced PDO thread lifts and the introduction of sculptura, a bio stimulating filler that encourages your collagen growth with results that can last several years.”
SKIN CARE・2 DAYS AGO
The Columbus Dispatch

In January 2019, after the Crew was saved, a new ownership group took control and circled 2021 as the year to compete for the MLS Cup. It was a good plan: Give team president/general manager Tim Bezbatchenko and coach Caleb Porter a year-plus to build a capable team in time for the opening of their new stadium, then go for it.  ...
MLS・22 HOURS AGO
KHON2

UH fans are surprised and disappointed that the university and June Jones did not reach an agreement as he was the top choice for many to lead the Rainbow Warriors football team.
COLLEGE SPORTS・51 MINUTES AGO