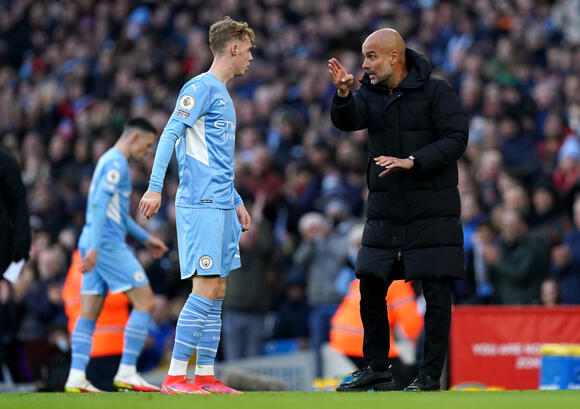 The Sky Blues returned to second place in the table with another win against the Toffees, following Liverpool's 4-0 thrashing of Arsenal and Chelsea's 3-0 win away at Leicester on Saturday.

The 19-year-old was positioned down the middle by Pep Guardiola, as he partnered Raheem Sterling and fellow Manchester City academy graduate Phil Foden in an all-English frontline.

While he failed to truly influence proceedings, Palmer helped link play in and around the opposition box for his side, who put in a dominating display ahead of a crunch Champions League encounter against PSG in mid-week.

"I’m very pleased with his (Palmer) performance," said Guardiola in his post-match press conference, as quoted by the club's official website.

“It was difficult for the people who played in the middle, it was hard to find spaces. The striker is the most difficult position in the team."

Despite having a rather quiet performance in the opening 45 minutes, Palmer was involved to a greater extent in the second-half, as Manchester City sealed the game with Rodri and Bernardo Silva getting in on the act after Sterling's first-half opener.

Guardiola added, “As the game went on, he (Palmer) showed his quality in the final third. He made a good performance."

“Now, he has almost 90 minutes in his legs and knows how to fight in the Premier League against experienced players."

The Catalan boss also handed another of Manchester City's young stars his first minutes of Premier League action, in the closing stages of the tie.

A comprehensive round-up of all the latest Manchester City transfer news and gossip from across the globe, as we enter the final week of the January transfer window. Zalán Vancsa is likely to stay at MTK Budapest on-loan for the rest of the season. The forward was expected to join City Football Group's Lommel SK, but the sides involved are concerned his registration may take too long. All opportunities are being explored. (Ben Bocsak)
PREMIER LEAGUE・2 DAYS AGO
CityXtra

Despite James McAtee only making a single appearance this season, in a cameo off the bench against Everton in the Premier League, the Manchester City youth product already has a high-profile list of fans. Meanwhile, former Welsh international and current radio and TV pundit Robbie Savage singled out the 19-year...
PREMIER LEAGUE・21 HOURS AGO
CityXtra

Liam Delap looked set to make his breakthrough in Pep Guardiola's Manchester City first team squad at the beginning of the 2021/22 campaign, with several factors working in the young Englishman's favour. With Sergio Aguero departing club for Barcelona, and their failure to sign a replacement, Delap looked poised to...
PREMIER LEAGUE・2 DAYS AGO

A flurry of reports over the past week have seen Argentina international Julian Alvarez be heavily linked with sealing a move to Manchester City ahead of the transfer deadline on January 31st before being loaned back to River Plate for the remainder of the campaign. While Alvarez's comparisons to former...
PREMIER LEAGUE・1 DAY AGO
CityXtra

Manchester City’s title win in the 2011/12 season is regarded as one of, if not the most iconic title win in Premier League history. The Sky Blues' league triumph on goal difference with their fate alongside cross-town rivals Manchester United’s being decided on the final day is already an incredible story - surely the most dramatic end to a Premier League title race ever.
PREMIER LEAGUE・20 HOURS AGO
CityXtra

There is no denying the fact that James McAtee is right among the best English talent pool of up-and-coming young players after emerging through the academy ranks at the Etihad Stadium into the first-team squad. With 14 goals and four assists to his name in 17 Premier League 2 appearances...
PREMIER LEAGUE・20 HOURS AGO

The search for Europe's brightest prospects follows a similar trend set by Manchester City and the City Football Group in South America, where the football conglomerate has set a reputation for being the first to emerging talents. That search in South America most recently took them to River Plate's Julian...
PREMIER LEAGUE・2 DAYS AGO
CityXtra

It was recently confirmed by none other than transfer expert Fabrizio Romano this week that Julian Alvarez’s move to Manchester City from Argentine giants River Plate was all but done. With a report claiming that the official announcement for the Argentine international would be made before Friday of this...
PREMIER LEAGUE・1 DAY AGO
CityXtra

Ever since the Abu Dhabi Group's takeover of Manchester City in 2008, the ultimate goal has been to lift the Champions League trophy. By appointing Ferran Soriano and Txiki Begiristain, the hierarchy put everything in place to ensure the appointment of Pep Guardiola as manager - one of the sports' serial winners.
UEFA・19 HOURS AGO

James McAtee is the cream of the crop from a prodigious group of youngsters that have come up through the ranks at the brilliant Manchester City academy across the past few months. Pep Guardiola is certainly not a manager who hands out freebies in the form of first-team appearances, and...
PREMIER LEAGUE・22 HOURS AGO
CityXtra

A comprehensive round-up of all the latest Manchester City transfer news and gossip from across the globe, as we enter the final week of the January transfer window. Manchester City are on the 'trail’ of Paranaense left-back Abner Vinícius (21) and ‘want to buy him' this summer. However, the Brazilian club plan to renew his current contract - which expires in 2024 - and increase his €25 million release clause. (TuttoMercatoWeb, Sport Witness)
WORLD・1 DAY AGO
CityXtra

From Italy: Pep Guardiola Demands Signing of Serie A Star Amid Contract Talks With Current Side - Liverpool and Tottenham Also Mentioned

The Premier League champions have been linked with a plethora of top attackers since Sergio Aguero's switch to Barcelona last summer, which left the first-team squad without the services of a natural striker. Despite their failure in plotting a mega swoop for Tottenham forward Harry Kane last summer, Pep Guardiola's...
PREMIER LEAGUE・2 DAYS AGO
CityXtra

It’s fair to say that Manchester City have been in a league of their own so far this season. Sitting nine points clear at the top of the Premier League table and only recently seeing an end to their incredible 12-game winning streak, Manchester City have swatted past teams without the presence of a natural striker.
PREMIER LEAGUE・1 DAY AGO
CityXtra

The Manchester City defender was dismissed with eight minutes remaining in the club's 2-1 defeat to RB Leipzig in Germany, on matchday six of their Champions League group stage campaign in December. Speaking during a recent interview on the subject of his dismissal against the Bundesliga side, Kyle Walker said,...
UEFA・21 HOURS AGO
CBS Sports

Like most things with Everton this season, their search hire a new manager to replace Rafa Benitez has been weird and chaotic. At one point, it seemed like they were set to appoint Portuguese tactician Vitor Pereira before fan backlash, graffiti and a bizarre Sky Sports interview during which he said in response, "I will move forward with my life and if they want me they must call me."
PREMIER LEAGUE・14 HOURS AGO
The Independent

Everton managerial candidate Vitor Pereira admits he is hurt by fan opposition to his potential appointment but it has not put him off wanting the job.The club’s search for a seventh permanent boss in six years took a bizarre twist when the Portuguese, who has emerged as owner Farhad Moshiri’s preferred option, appeared on live television to discuss his credentials.Pereira has already had two interviews with Moshiri but said he did not know what the outcome was and the “decision was the club’s”.Reports the former Porto and Fenerbahce coach was edging closer to replacing Rafael Benitez – whose appointment as...
PREMIER LEAGUE・2 DAYS AGO
LFCTransferRoom

Alisson Becker was shown a red card in Brazil's World Cup qualification match with Ecuador on Thursday evening and you can watch it here. Fortunately however for the Liverpool goalkeeper, upon VAR review, the decision was overturned and reduced to just a yellow card. After Casemiro gave Brazil the lead...
PREMIER LEAGUE・1 DAY AGO