"We All Thought He Was Awful!" - Former Man City Defender Recalls Star Midfielder's First Impression at the Club 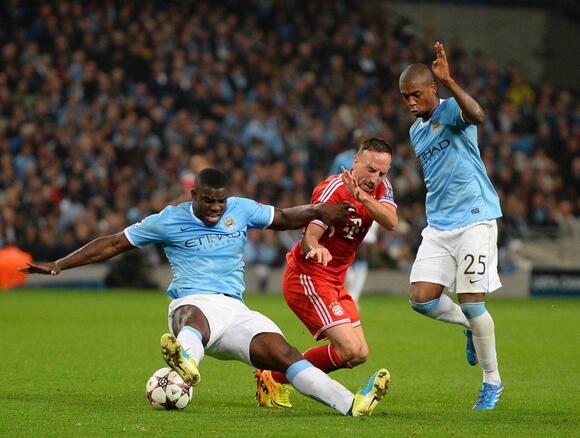 At 36 years of age, Fernandinho is still a Rolls-Royce of a footballer.

The Brazilian midfielder been an ever-present in defensive midfield for nearly eight years and has constantly produced high-quality performances at the very highest level.

So it seems very strange to hear that some Manchester City players didn't think he was geared up for success upon his arrival from Shakhtar Donetsk in the summer of 2013.

Micah Richards was speaking on the Match of the Day Top 10 podcast, as relayed by the Manchester Evening News, about the Brazilian's arrival at the club and how he fared in his first days at the Etihad Stadium.

"The team was getting better and he filled the gap. He has been consistent for about nine years," Richards began.

"When he first came, he was sick in pre-season. The intensity, we all thought he was awful. If he can't keep up with the running. You can quote me on that, we were like 'what is this'?"

Hearing this was certainly a surprise for plenty of Manchester City fans, who have become so accustomed to brilliant performances from the veteran - week in, week out.

Micah Richards did however caveat his story to point out that when Fernandinho got up to speed, it was clear what sublime talent he possessed.

"It took him two weeks to get back fit and he's the best defensive midfielder [in the Premier League] from then. I played with Yaya Toure and Patrick Vieira, he wasn't as talented as them but he was more efficient than them."

Fernandinho continued, "You could rely on him every single game. He'd do the same, always give 100 percent. He was a great leader too. Spoke perfect English. "

"You see those little yellow cards when he fouls you then says sorry. He used to do that in training all the time," the former right-back concluded.

Raheem Sterling has cemented his reputation as one of the most key players for Manchester City and England in recent years, with the London-born attacker having established his status as one of the deadliest wingers in world football. The 27-year-old has developed into the embodiment of the modern-day winger since...
PREMIER LEAGUE・2 DAYS AGO
San Diego Union-Tribune

A drone interrupted play at Brentford, we had a late, late winner at Old Trafford and Newcastle dug in for victory on an eventful afternoon
PREMIER LEAGUE・1 DAY AGO
newschain

Raheem Sterling’s future at Manchester City has been at the height of its uncertainty in recent times, with his current contract set to expire in June 2023. A report by the Athletic revealed that the England international continues to be in two minds about committing his future to the club, despite an upturn in his form over the past month and a half.
PREMIER LEAGUE・2 DAYS AGO
CityXtra

On Friday, numerous reports from South America stated that Manchester City were in talks to sign Julián Álvarez - one of Argentina's hottest prospects, with one journalist reporting that a deal was "about to close" for the player to move to England. The 21 year-old was named South...
PREMIER LEAGUE・2 DAYS AGO

At the start of the ongoing season, the 2021/22 campaign was billed to be a four-horse race between Manchester City, Chelsea, Liverpool, and Manchester United. However, fast forward to the Premier League table at this present moment and Pep Guardiola’s side sit an impressive 11 points clear of second-placed Liverpool.
PREMIER LEAGUE・1 DAY AGO
CityXtra

Pep Guardiola is entering 2022 with just one year remaining on his current contract. Given that the Spanish manager will have completed seven full seasons at the club by 2023, the question remains whether he has yet another extension in mind or will he finally call it a day at Manchester City?
PREMIER LEAGUE・1 DAY AGO
Tribal Football

Manchester City boss Pep Guardiola is happy seeing Oriol Romeu thrive with Soutnampton. Guardiola coached Romeu at Barcelona and praised the midfielder before Saturday's 1-1 draw. "His understanding," the title-favourite's manager said. “I like it when holding midfielders understand the game. “He knows exactly how his team have to...
PREMIER LEAGUE・1 DAY AGO
Tribal Football

Southampton midfielder Oriol Romeu says there's a lot to take from their 1-1 draw with Manchester City. Romeu, making his 200th Premier League appearance for the club, played a pivotal role in the draw to ensure Saints remain unbeaten in their last eight home appearances. “I can't say really how...
PREMIER LEAGUE・1 DAY AGO

There is a strong argument to suggest that Kyle Walker has been the most consistent player in the Pep Guardiola era, since his big money move from Tottenham in the summer of 2017. The England international right-back is set for his 126th start in the Premier League against Southampton on...
PREMIER LEAGUE・1 DAY AGO
The Independent

Liverpool moved to within nine points of Manchester City at the top of the Premier League table with an entertaining 3-1 win over Crystal Palace at Selhurst Park.Virgil van Dijk gave the visitors the lead in the eighth minute, thumping a bullet header beyond Vicente Guaita from an Andy Robertson corner. And Liverpool’s dominance was rewarded with a second shortly after the half hour mark when Robertson crossed for Alex Oxlade-Chamberlain to bring down and fire home at the back post.Palace finally got a foothold in the game towards the end of the first half and continued that urgency after...
PREMIER LEAGUE・15 HOURS AGO
goal.com

What a game that was from Diego Simeone's men, trailing 2-0 before scoring three goals in the second half – including two in stoppage time – to claim all three points. An epic, monumental comeback. Whew! Take a breather, everyone. Has this been the most Atletico Madrid game...
PREMIER LEAGUE・1 DAY AGO
CityXtra

With Pep Guardiola’s contract at Manchester City set to run out in 2023, the million-dollar question remains, which manager will be the successor to the Spaniard after his departure. The Catalan coach has won ten trophies in his five full seasons at the Etihad Stadium, and looks on course...
PREMIER LEAGUE・15 HOURS AGO

With Manchester City operating without a natural number nine this season, the prospect of signing a proven goalscorer in the summer remains an enticing one. Despite Pep Guardiola’s fluid false-nine system reaping rewards as City are in contention on three fronts so far this season, the need for a Sergio Aguero successor remains crucial to the club's future prospects.
PREMIER LEAGUE・1 DAY AGO
The Independent

Manchester City travel to the south coast on Saturday evening to try and extent their lead at the top of the Premier League by beating Southampton.Saints held Pep Guardiola’s men to a goalless draw back in October but today’s visitors have been in scintillating form in recent months, winning their last 12 consecutive league fixtures and building up a lead of 11 points to second-placed Liverpool and 14 to Chelsea in third.Kevin De Bruyne’s superb curling finish was enough to secure victory over the Blues last time out, and the Belgian could start up front at St. Mary’s with Raheem...
PREMIER LEAGUE・1 DAY AGO
CityXtra

Whoever decides to follow the unprecedented success Pep Guardiola has had at Manchester City will be given a near-impossible task. The ultimate goal behind the appointments of Ferran Soriano and Txiki Begiristain was to have the structure in place to seamlessly bring Guardiola to the club and allow him all the power to create a winning machine.
PREMIER LEAGUE・1 DAY AGO