Opinion: The Knicks Should Sign This Very Famous Player 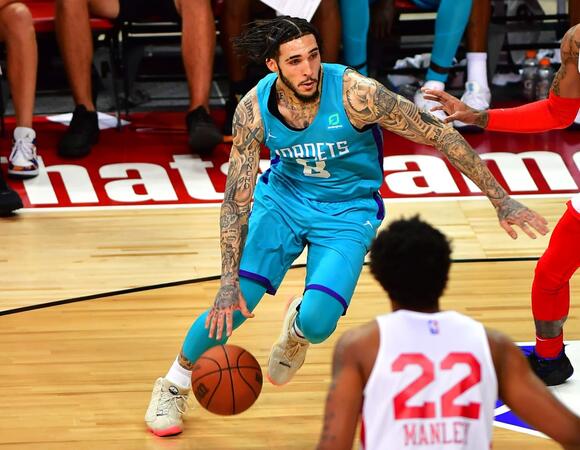 I think that the New York Knicks should go out and sign LiAngelo Ball. The Knicks are going to be a playoff team and there is absolutely no downside.

After making the playoffs last season for the first time since 2013, the Knicks are once again a good team.

The addition of Tom Thibodeau as head coach proved to change their entire culture around, and he won the NBA's Coach of The Year Award last season.

I think that the Knicks should sign LiAngelo Ball and give the middle Ball brother a shot, because he is a 22-year-old forward who can defend and shoot the basketball.

Right now, he plays for the Charlotte Hornets G-League team, the Greensboro Swarm, and in his first game he exploded off of the bench.

This is also coming off of the NBA Summer League where he averaged 9.6 points per game in five games, and in the first game he had 16 points, two steals and drilled five three-pointers.

Lonzo Ball is thriving on the Chicago Bulls and was the second overall pick in the 2017 NBA Draft, and LaMelo Ball is coming off of being the Rookie of The Year for the Charlotte Hornets.

Sure, LiAngelo is not the prospect that they ever were, but he has gotten an unfair reputation of not being good.

I think that playing for coach Thibodeau would help turn him into a legitimate NBA role player, and the fans at Madison Square Garden in New York City would love him.

While there has been no reported interest, I think the Knicks should consider making the move.

The Knicks have made a change to their 15-man roster, announcing in a press release that they’ve re-signed guard Ryan Arcidiacono to a new 10-day contract and waived forward Solomon Hill. The moves are essentially the inverse of ones the Knicks made less than a week ago. Last Thursday,...
NBA・2 DAYS AGO
FastBreak on FanNation

Should RJ Barrett be the New York Knicks 1st option?

Prior to the team’s performance last night against the Pelicans, New York Knicks wing RJ Barrett has recently hit a stretch of great games, scoring at all three levels with solid efficiency. Since Julius Randle’s 2 game absence from COVID protocols, his touches have increased. The Knicks have succeeded...
NBA・3 HOURS AGO
WFAN Sports Radio

The Knicks are “pissed off” after yet another frustrating loss at home, the team’s third straight defeat in front of their home fans at Madison Square Garden.
NBA・2 HOURS AGO
FastBreak on FanNation

Is It Time To Worry About The Knicks?

Ben Stinar and Haley Jordan sat down to talk about the New York Knicks in the latest episode of Stinar For 3.
NBA・14 HOURS AGO
FastBreak on FanNation

Pelicans Starting Lineup Against The Knicks

The New Orleans Pelicans are in New York to play the Knicks on Thursday night.
NBA・18 HOURS AGO

Julius Randle is getting a thumbs down from Knicks fans for his performance this season.
NBA・2 HOURS AGO
FanSided

New York Knicks: 4 players to target at the trade deadline

Four players that the New York Knicks should target ahead of the NBA Trade Deadline. The New York Knicks, through the first 46 games of the season, are just 22-24. After the success that they experienced last season, you can’t describe the team’s first half of the season as nothing short of a disappointment.
NBA・7 HOURS AGO
fadeawayworld.net

When it comes to basketball, Ben Simmons has been dealing with a surplus of issues, most of which are directly related to his messy breakup with the Philadelphia 76ers. After months of trade demands, the team has tried to make him return, and Simmons has sacrificed millions to ensure that doesn't happen.
CELEBRITIES・19 DAYS AGO
FastBreak on FanNation

The Golden State Warriors are hosting the Detroit Pistons on Tuesday evening, and the Warriors shared an awesome photo of Klay Thompson and Steph Curry.
NBA・2 DAYS AGO

Changes are coming for the Memphis men’s basketball team. On Wednesday, head coach Penny Hardaway announced that Rasheed Wallace’s role with the team has been altered. Wallace, who agreed to become an assistant coach at Memphis back in August, will serve as a consultant for the time being. His in-person duties have been taken away from him – for now.
MEMPHIS, TN・1 DAY AGO
Sportsnaut

Bookmark. Save. Do your thing. We will be providing constant updates on this page as it relates to the biggest
NBA・2 DAYS AGO
Audacy

A potentially major development occurred in the Los Angeles Lakers’ 111-104 loss to the Indiana Pacers on Wednesday. With 3:52 left in the fourth quarter, head coach Frank Vogel deployed Malik Monk onto the court, taking Russell Westbrook out of the game in crunch time — an adjustment rarely seen in the first half of the 2021-22 season. About four minutes earlier, L.A. had lost its lead that they held onto for the majority of the game.
NBA・19 HOURS AGO

NBA veteran Chandler Parsons has announced his retirement from the NBA in an Instagram post on Tuesday. Parsons has played for the Houston Rockets, Dallas Mavericks, Memphis Grizzlies and Atlanta Hawks.
NBA・2 DAYS AGO
FastBreak on FanNation

Viral Video Of Kyrie Irving's Interaction With A Fan

Kyrie Irving and a fan exchanged words during the game between the Brooklyn Nets and Cleveland Cavaliers on Monday.
NBA・2 DAYS AGO
FastBreak on FanNation