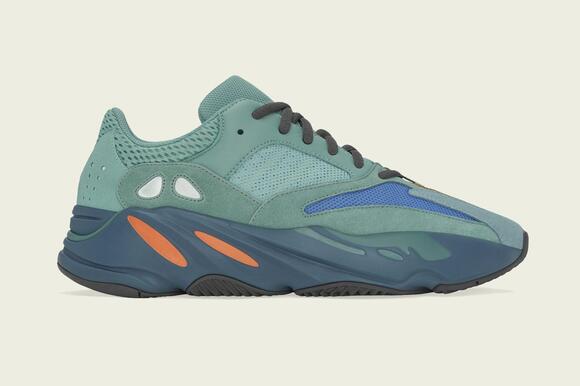 The German sportswear giant confirmed on its release calendar that the “Fade Azure” makeup of the Yeezy Boost 700 is hitting stores before week’s end.

The latest style wears a predominantly blue color scheme with a lighter shade of the hue, which covers the mesh-based upper including the leather and suede overlay panels. Breaking up the look are dark blue and gold panels at the forefoot along with dark gray shoelaces, and gray Yeezy and Adidas Trefoil branding stamped on the footbed. Rounding out the design is a dark blue Boost-cushioned midsole with vibrant orange accents by the heel and a dark gray rubber outsole.

The Adidas Yeezy Boost 700 “Fade Azure” is launching this Saturday via the Confirmed app in North America and Europe as well as on the Adidas app in select countries. The shoe will also drop at Yeezy Supply and at select Adidas Yeezy stockists globally. The shoe will come with a $250 price tag. According to the Yeezy release calendar, the Yeezy Boost 700 “Fade Azure” will be available exclusively in adult sizing.

LaMelo Ball has another new iteration of his acclaimed Puma MB.01 sneaker coming soon. This time, the sophomore point guard for the Charlotte Hornets has tapped the hit tv series “Rick and Morty” to create a new mismatched makeup of his Puma signature shoe, which will hit shelves in February. According to the sportswear brand, the “Rick and Morty” x Puma MB.01 collab dons various graphics throughout the shoe that’s inspired by Rick and Morty’s intergalactic misadventures. The sneaker wears a mismatched look, donning a bright green color scheme for the left shoe while a vibrant red hue covers a majority of the right pair....
BEAUTY & FASHION・9 DAYS AGO
Footwear News

Venus Williams layered leather looks in her latest post. The tennis legend and FN’s May cover star posted to her Instagram page on Tuesday in a chic look. She paired black high-waisted leather pants with a white spaghetti strap tank top that popped against the edgy black pants in her photo. Her pants, courtesy of Givenchy, featured a bootcut leg opening with stitching along the calf. Williams added a thick black wristwatch to her look and carried a black leather Lanvin purse to round out the outfit. View this post on Instagram A post shared by Venus Williams (@venuswilliams) When it came...
BEAUTY & FASHION・23 DAYS AGO
Footwear News

The Louis Vuitton and Nike “Air Force 1” by Virgil Abloh sneakers are almost here. Open for bidding Jan. 26, 200 special-edition pairs of the shoes, paired with a Louis Vuitton pilot cases, are up for auction in partnership with Sotheby’s. Proceeds will benefit The Virgil Abloh “Post-Modern” Scholarship Fund, which in partnership with the Fashion Scholarship Fund, supports the education of academically promising students of Black, African American, or African descent — per Abloh’s wishes. The designer, who founded and built Off-White into a formidable brand and made a huge mark at Louis Vuitton as the men’s artistic director, died at...
AEROSPACE & DEFENSE・9 DAYS AGO
SneakerFiles

The latest move from Jordan Brand on the Jordan 6 Rings will be to release several kids exclusive colorways. Recently, we showcased a pair that was highlighted in ‘Neon Green’, and now, we look at the upcoming ‘Atmosphere’ iteration. This Jordan 6 Rings features an Atmosphere,...
BEAUTY & FASHION・26 DAYS AGO

The Air Jordan 6 has itself a significant year in 2021 in light of its 30th anniversary as it brought back the highly-coveted “Carmine” colorway and even dropped another collaboration with Travis Scott. And it’s self-assured to have another exciting year with the release of more fresh colorways, one being the Air Jordan 6 “Mint Foam” makeup for the ladies.
APPAREL・22 DAYS AGO
Hypebae

Released in 1982, the Nike Air Force 1 is arguably one of the world’s most recognizable sneakers. The iconic silhouette has seen hundreds of collectible reinterpretations, from practical weatherized models to fashion-forward, Swarovski-covered designs. For those looking to add the classic sneaker to their rotation, read on for five...
AEROSPACE & DEFENSE・17 DAYS AGO
Footwear News

If you purchase an independently reviewed product or service through a link on our website, Footwear News may receive an affiliate commission. The classic Nike Air Force 1 will once again be the recipient of a new colorway for Valentine’s Day. Images of the Nike Air Force 1 Low “Valentine’s Day” colorway have surfaced this week, an upcoming style for the iconic silhouette that’s wearing hues and details tied to the heart-filled holiday. The sneaker starts off with a predominantly white leather upper that’s offset with a special pink Swoosh branding on the sides decorated with “Nike” and “Love” texts throughout. Breaking up...
AEROSPACE & DEFENSE・2 DAYS AGO
Footwear News

Clarks is giving recent graduates the chance to create and sell a new design for the iconic Wallabee silhouette. The almost 200-year-old British shoe company is partnering with One School, a free and intensive portfolio program for Black designers and creatives, to offer a design competition for graduates. Over 60 graduates from the past year are eligible to submit their own designs for Clarks’ classic Wallabee Boot. The submissions will be reviewed by Clarks Originals shoe designers and one winner will be selected based on creativity, relevancy and production potential. The winning design will be produced, marketed and sold across the globe, with...
DESIGNERS & COLLECTIONS・3 DAYS AGO

In fashion, a logo can be the difference between a $90 pair of heels and a $900 pair of heels. That’s the power of an iconic, instantly recognizable visual brand identity. And the best fashion logos have some interesting origin stories, from the aristocratic roots of the Chanel Cs to the iconic Nike Swoosh logo that cost the brand a mere $35. Sure, you know the Gucci logo from the Louis Vuitton logo from the Yves Saint Laurent logo. But you probably don’t know how these popular fashion logos became irrevocably iconic. For that, check out the origin stories behind some...
DESIGNERS & COLLECTIONS・3 DAYS AGO
Hypebae

It wasn’t until very late last year that the Jordan 6 Rings started picking back up the pace. Multiple upcoming colorways have been revealed since then, including tropical-inspired make-ups and homages to icons like the “Playoffs.” But unlike these, this newest pair delivers total simplicity, rarely ever straying outside of its red and white hues.
APPAREL・3 DAYS AGO
Footwear News

Bad Bunny and Adidas have another sneaker collab coming soon. After delivering an all-black Forum Buckle Low style in August, the German sportswear giant and the Puerto Rican musician are expected to drop their latest Forum Powerphase collab after product images of the shoe surfaced this week. The shoe features a predominantly brown color scheme on the mesh-based upper that’s combined with suede and leather overlay panels on the mudguard and heel. Breaking up the look is the orange Three Stripes branding on the sides including the rapper’s first name printed at the midfoot, a black toe box and a blue heel...
APPAREL・2 DAYS AGO

Jan. 28, 2022: Burberry has launched an exclusive capsule collection for Saks Fifth Avenue in New York City. The capsule includes graphic T-shirts, sweatshirts, joggers, and shorts. A raindrop Monogram motif is also seen across an array of accessories and ready-to-wear, the latest chapter in the ever-evolving Thomas Burberry Monogram story. The collection’s prints explore the dimensions and forms of rain droplets, along with the refracted shapes that appear when looking through them, Burberry said in a statement. In celebration of the launch, Burberry has unveiled a window takeover of Saks Fifth Avenue’s NYC flagship location. Echoing the rain-inspired prints...
NEW YORK CITY, NY・19 HOURS AGO
Footwear News

If you purchase an independently reviewed product or service through a link on our website, Footwear News may receive an affiliate commission. Adidas and Pharrell Williams’ latest Sichona sneaker is bringing a shock of sunshine to the winter season. Releasing on January 28, the “Shock Yellow” colorway of the Adidas x Pharrell Williams Humanrace brand’s key sneaker features a bold yellow color palette with monochrome uppers, soles and woven laces. The pair’s signature Primeknit uppers create a sock-like fit, with chunky rounded TPU midsoles and outsoles for added comfort. The $180 style is complete with orange co-branded tongue tabs and pale blue...
DESIGNERS & COLLECTIONS・3 DAYS AGO
inputmag.com

Yeezy’s pillow-like NSTLD boot is dropping again soon, this time in a reflective gray palette. Migos member Offset teased a pair of the slippers in an impromptu photoshoot posted on Instagram, showing off the unreleased boots in snow. It’s the first time the winter shoe has been seen in actual winter weather.
APPAREL・14 DAYS AGO
Footwear News

More Adidas Yeezy Boost 350 V2 styles are coming soon. Sneaker leak social media account @Yeezyinfluence shared images of the Yeezy Boost 350 V2 CMPCT “Slate Red” colorway on Instagram, which were initially posted by sneaker boutique @requestboutiqueclt. The sneaker features a predominantly red Primeknit upper that’s coupled with brown accents towards the forefoot and midfoot. The shoe is also equipped with a thicker ankle collar and bungee cord-styled shoelaces. Rounding out the design is a white Boost-cushioned midsole that’s housed within a red exterior and a matching red rubber outsole. View this post on Instagram A post shared by Yeezyinfluence (@yeezyinfluence) According...
APPAREL・7 DAYS AGO
SneakerFiles

We first saw the adidas Yeezy Boost 350 V2 ‘Blue Tint’ release in December 2017 and now, the pair will restock during January 2022. Looking closer, this adidas Yeezy Boost 350 V2 comes with Light Grey and White Primeknit across the upper. Next, ‘SPLY-350’ text is flipped on the panels that are done in Red along with the dots around the heel tab. Blue Tine adorns the liner with a pastel Blue on the laces and a Boost midsole which finishes the look.
SHOPPING・10 DAYS AGO
SneakerFiles

Adidas Originals latest Ultra Boost, the Ultra Boost 2022 will release in a bright Yellow which is sure to turn some heads. This adidas Ultra Boost 2022 comes dressed in a Yellow, Legacy Indigo, and Sky Rush color combination. The pair comes constructed with Primeknit on the upper that features high-performance yarn with at least 50% Parley Ocean Plastic. Other details include a White Boost midsole and a Continental rubber outsole.
RETAIL・10 DAYS AGO
Highsnobiety

Editor's Notes: Cast your mind back to the mid-2010s, and likely, you'll recall the immense popularity of adidas and Yohji Yamamoto's Y-3 Qasa High. The ninja-like silhouette was the go-to sneaker for all-black fashion disciples throughout the decade. There are no doubts that the "Triple Black" rendition was (unsurprising) its most popular finish, and you'll likely still catch the odd pair gliding the streets to this day.
BEAUTY & FASHION・8 DAYS AGO
sneakernews.com

The adidas Forum Low has benefited tremendously from Bad Bunny‘s co-sign, but it’s ultimately won audiences over with its sleek style and plethora of offerings. Soon joining the dozens of colorways that’ve surfaced since the model’s resurgence in 2020 is a white and “Collegiate Green” ensemble.
APPAREL・13 DAYS AGO