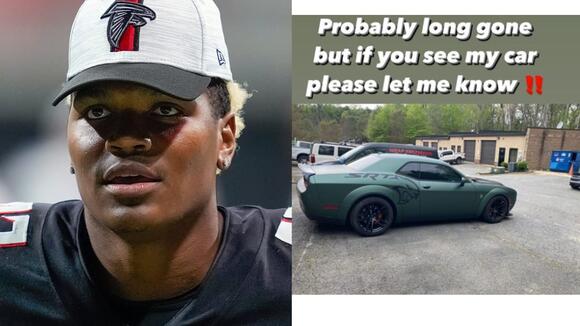 It's been a frustrating season for Atlanta Falcons linebacker Mykal Walker, and now someone has stolen his car.

Atlanta Falcons linebacker Mykal Walker has had a tough second-season in the NFL, and now it's gotten personal.

Walker posted on his Instagram account on Sunday that his Dodge Challenger had been stolen from the Atlanta Airport.

"Probably long gone but if you see my car please let me know." wrote Walker on Instagram.

Walker's Challenger appears to be the SRT Superstock which has an MSRP of roughly $84,000.

The 800+ horsepower variant of Dodge's common Challenger was a limited edition in 2020 and would increase in value vs. the 2021 model. No word on which Challenger Walker hard, but it's not a common car.

Walker is coming off of a PFF All-Rookie Team selection in 2020 . He was lauded for his coverage skills in the 4-3 system Atlanta employed last year, but he has found his opportunities limited in new defensive coordinator Dean Pees' 3-4 scheme.

Walker had 45 tackles a rookie last year, but has just 11 tackles this season for the Falcons. His limited production is connected to his limited playing time. He has more than five defensive snaps just three times this season and more than 10 one time: against the Dallas Cowboy in Week 10.

Walker is not the only Falcons player to have run into car-theft problems this year. Kicker Younghoe Koo had his car stolen with his cleats in them over the summer as well.

Koo got a new set of cleats, and with the relatively unique nature of Walker's car, there's a better than usual chance of its recovery (“usual chance” being zero).

The Falcons will be looking to recover from two blowout losses when they play against the Jacksonville Jaguars this week. They're just one-point favorites against the 2-8 Jaguars, which speaks volumes about Atlanta's recent showings.

Ben Roethlisberger played what will likely be his final game in the NFL as the Steelers were blown out by the Kansas City Chiefs in the wildcard round. Ben’s final season should be a warning not only to the Atlanta Falcons but to the rest of the league. With...
NFL・1 DAY AGO
Falcon Report

Wide receiver went from strength to absent quickly with the Atlanta Falcons. Who could the Falcons target in free agency to rebuild their receiver room?
NFL・2 DAYS AGO
Falcon Report

If Payton would ever exit the NFC South? That would be helpful to the Atlanta Falcons' pursuit of the top spot in the division.
NFL・1 DAY AGO

When modern football fans think of the Atlanta Falcons, quarterback Matt Ryan is likely one of the first names that
NFL・1 DAY AGO
Falcon Report

The Atlanta Falcons have announced their first moves of the offseason.
NFL・2 DAYS AGO
Falcon Report

A bidding war for him by AFC teams like the Patriots, Jets and Dolphins? That can help bump up the return on a trade. But …
NFL・2 DAYS AGO
Falcon Report

Tori McElhaney joined Chris and Harry to discuss the biggest areas of need going in to the 2022 NFL offseason. She says the Falcons have to fix the pass rush.
NFL・19 HOURS AGO
CBS Sports

Dallas Cowboys owner and de facto general manager Jerry Jones is frustrated with a whole lot of things after his team's disappointing opening-round playoff loss to the San Francisco 49ers. Among the things disappointing him at the moment is wide receiver Amari Cooper. "Amari Cooper should take half the field...
NFL・1 DAY AGO
The Spun

On Friday night, five-star quarterback recruit Arch Manning had the best college football coach in the country – and his top assistants – at his high school basketball game. Manning, the No. 1 quarterback recruit in the 2023 class, is also a star on the hardwood. Alabama coach...
COLLEGE SPORTS・18 HOURS AGO
Sportsnaut

Super Bowl 2022: The Tampa Bay Buccaneers are the reigning NFL champions, but who'll make the playoffs — and lift the Lombardi Trophy at the end of this season?
NFL・8 HOURS AGO
BuckeyesNow

The Pittsburgh Steelers will have a quarterback competition on their hands for the first time in nearly two decades, and head coach Mike Tomlin expects former Ohio State signal-caller Dwayne Haskins to battle Mason Rudolph this offseason for the right to be Ben Roethlisberger’s immediate successor. “Both guys have...
NFL・19 HOURS AGO
Sports Illustrated

The virus caused a shift in the broadcast pairing for the network during this weekend's divisional round game.
NFL・1 DAY AGO
Sportsnaut

Aaron Rodgers and the Green Bay Packers entered the playoffs as the strong favorite to win the Super Bowl. But
NFL・8 HOURS AGO
Insider

Just eight teams remain in the fight for Super Bowl LVI. This week, we're backing the Packers and Chiefs to cover the spread.
NFL・2 DAYS AGO
ClutchPoints

The Green Bay Packers lost in absolutely brutal fashion, immediately shifting their attention from chasing a Super Bowl title to trying to keep quarterback Aaron Rodgers. The game-shifting moment of the evening was a special teams play where nobody expected any fireworks to happen. Up one touchdown and punting from their own end zone, the Packers botched a routine punt that was deflected and returned for a touchdown by the San Francisco 49ers defense.
NFL・8 HOURS AGO
105.3 The Fan

The Baltimore Ravens made a very surprising coaching move on Friday evening with the decision to fire defensive coordinator Don “Wink” Martindale. Baltimore announced the news with a statement from head coach John Harbaugh, who said that he and Martindale “have agreed to move forward in separate directions.”
NFL・1 DAY AGO
hotnewhiphop.com

Skip Bayless Has A Strong Warning For Aaron Rodgers

This weekend is the Divisional Round for the NFL Playoffs, and there are some pretty big matchups. In the AFC, we have the Cincinnati Bengals against the Tennessee Titans and the Buffalo Bills against the Kansas City Chiefs. In the NFC, the Los Angeles Rams are taking on the Tampa Bay Buccaneers, all while the Green Bay Packers will take on the San Francisco 49ers.
NFL・1 DAY AGO