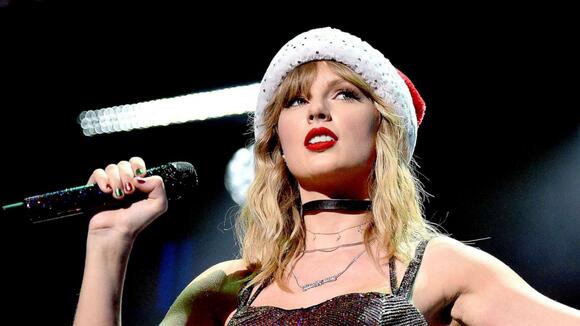 Christmas came early this year with the release of another re-recorded song by Taylor Swift .

The new version is reimagined with a 70-piece orchestra and a cozier old-timey feel.

"This version is amazing because it feels like that more sorta laid back Christmas feel of doing all your shopping and relaxing by a fire, and it's definitely that old school Christmas feel," Swift told Amazon Music in a video that shared a glimpse of her recording the song at Abbey Road Studios in London.

The holiday song is inspired by Swift's childhood growing up on a Christmas tree farm in Pennsylvania, and was written while celebrating with family over the holidays in 2019.

"Christmas Tree Farm" is the latest in Swift's ongoing effort to remake her legendary tracks. Earlier this year, the singer released "Fearless (Taylor's Version)" and on Nov. 12, she dropped the re-recorded version of her fourth studio album, "Red," which includes a 10-minute version of her hit song, " All Too Well ," as well as several new tracks from the vault.

The album has also already broken records. Last week, Swift scored her tenth number one album on the Billboard 200 chart with "Red (Taylor's Version)." She also sold 369,000 physical copies of the album, marking the biggest sales week for any album in 2021.

"I would never have thought it was possible to go back and remake my previous work, uncovering lost art and forgotten gems along the way, if you hadn't emboldened me," Swift wrote in an Instagram post the day "Red (Taylor's Version)" was released." "Red is about to be mine again, but it has always been ours."

Be sure to listen to "Christmas Tree Farm" exclusively on Amazon Music.

Shania Twain Celebrates as Taylor Swift Beats Her Charts Record: ‘The Baton Is Meant to be Passed’

Shania Twain is giving up a long-held record to Taylor Swift, but there's no "Bad Blood" over the handoff. On the contrary, Twain says she's "proud" of the younger star's achievement. Swift has now spent more weeks atop the Billboard Top Country Albums chart than any other female artist. With...
CELEBRITIES・12 DAYS AGO
NME

Shania Twain has congratulated Taylor Swift after Swift broke her long-standing US chart record. As of last week, Swift is now the female artist with the most weeks at the top of the Billboard Country Albums Chart. Quote tweeting an announcement of the news, Twain wrote: Let’s Go Girls!!!! Proud...
CELEBRITIES・13 DAYS AGO
E! News

Watch: All the Easter Eggs In Taylor Swift's New Video. Let the fan theories begin again. Jake Gyllenhaal is raising eyebrows after appearing in a W Magazine feature that appeared to reference Taylor Swift, whose latest album, Red (Taylor's Version), is chock-full of lyrics speculated to be about the 41-year-old actor. In a portrait taken by photographer Tim Walker released on Jan. 12, Jake is seen wearing a crimson button-down shirt with matching heart-shaped sunglasses resting on his head.
MUSIC・10 DAYS AGO
jupiterwarcry.com

Since Taylor Swift announced she was going to release “Red (Taylor’s Version),” a re-release of her 2012 classic, anticipation has run high and she did not disappoint. Somehow the new album and its songs, including the 10-minute original version of “All Too Well,” turned out to be even better than expected, taking an already phenomenal album and transforming it into an even greater masterpiece full of anger and heartbreak. Not only were fans able to relate to Swift’s hurt and anger on a deeper level than the artist has ever been able to achieve before, but they were able to experience a “Red” that is bigger, better, and casually crueler.
CELEBRITIES・9 DAYS AGO

When Shania Twain said, “Let’s go girls!” – she meant it. Recently, Twain praised Taylor Swift on social media when Swift broke her record for being the female artist who spent the most weeks at the top of the Billboard Country Albums Chart. Twain held the No. 1 position with 97 weeks until Swift notched 99 weeks at No. 1.
CELEBRITIES・12 DAYS AGO
officialcharts.com

It's been a solid few months since Taylor Swift released her 10-minute version of 'All Too Well', and the fandom went wild over all the Jake Gyllenhaal hints in the single. Now, it looks as though there's another development for us all to obsess over, after Gyllenhaal seemingly responded to the track in a not-so-subtle hint in his latest photoshoot.
CELEBRITIES・10 DAYS AGO
mix929.com

Here’s how listening to Taylor Swift and Adele’s songs can earn you $1,100

While some people started the new year with a new romance, others may have experienced the opposite — and one company has quite the job offer for those brokenhearted individuals. FinanceBuzz is looking for their new DJ of Heartache, who will be tasked to indulge in sad, breakup tunes...
CELEBRITIES・3 DAYS AGO

An album of Australia’s most-endangered birds and their calls has sold its way into the No.3 spot on national pop charts, beating Taylor Swift and ABBA in its flight path. Songs of Disappearance is a 24-minute album of endangered birdcalls recorded by Australia’s best wildlife sound recordist, David Stewart. It sold over 2,000 copies and demonstrates the love of Australians who want to help their native species—with all proceeds going to conservation of our feathered friends.
MUSIC・8 DAYS AGO
GMA

Jennifer Aniston showed off her natural beauty and "humidity" hair in her latest selfie.
BEAUTY & FASHION・8 DAYS AGO
The US Sun

KELLY Clarkson's ex-husband Brandon Blackstock is now a grandfather as his daughter Savannah has welcomed a child. The American Idol alum filed for divorce from Brandon back in June 2020. Savannah took to Instagram to share a snap of newborn footprints as she captioned the sweet photo: "January 17, 2022."
RELATIONSHIPS・2 DAYS AGO
The Independent

A woman has thanked one of her fellow gym members for not staring at her as she does squats, and she is sparking a debate on social media for doing so.In a TikTok video posted on 1 January, @libbychristensen was squatting on an exercise machine, as a man was sitting on a bench behind her. @libbychristensen ty for your service kind sir #gymtok #girlwholift #YerAWizard ♬ The Golden Girls - The Main Title Theme - TV Themes “I just need to shout out this man who was behind me while it was hack squatting bc I...
WORKOUTS・3 DAYS AGO

Priyanka Chopra Jonas and Nick Jonas are new parents. And that's all they're revealing

Kim Kardashian and Pete Davidson are some of Hollywood’s most famous couples. Everyone knows how Kanye West feels, but nobody seems to be asking how Davidson’s family is dealing with this media circus. One report says Amy Davidson, Pete’s mother, detests Kardashian already. Gossip Cop investigates.
CELEBRITIES・2 DAYS AGO
Newsweek

"I will just say that he was simply larger than life and I will miss him every day for the rest of mine," Meat Loaf's daughter, Amanda Aday wrote on Facebook.
CELEBRITIES・1 DAY AGO
Daily Mail

Christina Aguilera released her second Spanish-language project on Friday, which comes almost 22 years after her first one. The 41-year-old pop star's EP La Fuerza follows 2000's Mi Reflejo, and features the singles Pa' Mis Muchachas, Somos Nada, and the latest, Santo. The siren took to Instagram to share her...
CELEBRITIES・1 DAY AGO

The $54m king of YouTube who makes more money than Jay-Z: How MrBeast won the internet

One day in January 2017, 18-year-old Jimmy Donaldson from North Carolina sat down in front of a camera and began counting to 100,000. Over the next forty hours, he went from chipper and alert to exhausted, leaning back in his chair, eyes closed, sometimes rocking back and forth, his numbers slurring into each other. Text labels on screen read "KILL ME" and "I regret this". Finally he made it to the end, allowing himself the briefest of celebrations before collapsing backwards: "What am I doing with my life?"The gruelling count turned out to be Mr Donaldson's big break. Since posting...
BEHIND VIRAL VIDEOS・6 DAYS AGO
E! News

Watch: Dakota Johnson Celebrates 32nd Birthday: Live From E! Rewind. Dakota Johnson is definitely used to having her picture taken—but as far as her baby pictures being out there? She may be fifty shades of annoyed. Although the 32-year-old technically has an official Instagram account, she isn't active on...
CELEBRITIES・3 DAYS AGO
The Independent

The proud parents are "overjoyed," they announced on Friday (January 21).
CELEBRITIES・1 DAY AGO