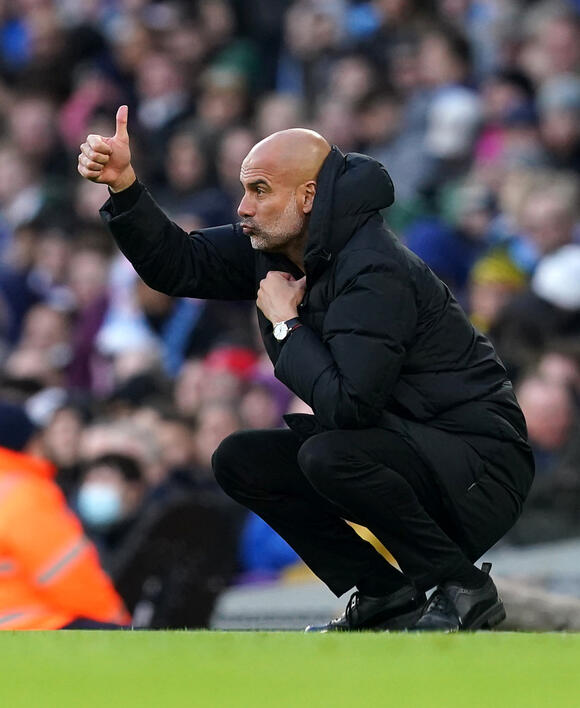 The Premier League champions reduced the gap at the top of the top-flight table to just three points, with a convincing victory over Rafael Benitez's Everton side at the Etihad Stadium.

Goals from Raheem Sterling, Rodri and Bernardo Silva ensured all three points for the hosts, who now face a monumental Champions League group-stage clash against Paris Saint-Germain on Wednesday night.

After making a bright start to the tie, Manchester City took the deal through Sterling, who was set up with a sensational pass by the in-form Joao Cancelo - who registered his sixth assist across all competitions this season.

Kyle Walker was also at his imperious best at the back for Pep Guardiola's side, as he coped expertly well with the threat posed by the likes of Richarlison, Anthony Gordon and Demarai Gray in attack for the Toffees.

Pep Guardiola was particularly pleased by the showings of his full-backs against the Merseyside outfit, as he explained in his post-match press conference.

Joao Cancelo has firmly established himself as one of the first names on the teamsheet for the Sky Blues after what has been a joyous start to the season for the Portugal international.

"It's not the first time Joao (Cancelo) has done something special - he has the quality," added Guardiola.

On the right flank, Kyle Walker has produced consistent defensive displays since the start of the campaign, which has seen Cancelo switch to the other side at the expense of former first-team regular Oleksandr Zinchenko.

Guardiola said: "It's the best Kyle (Walker) I've seen in five years together - defensively and attacking. Both (him and Cancelo) have been so important."

Julian Alvarez’s potential arrival at the Etihad Stadium could prove to be a massive coup for Manchester City, as the Premier League champions' search for a solution in the striker position continues. The Argentine forward, often compared to the recently retired Manchester City legend Sergio Aguero, has been one...
PREMIER LEAGUE・2 DAYS AGO
CityXtra

A flurry of reports over the past week have seen Argentina international Julian Alvarez be heavily linked with sealing a move to Manchester City ahead of the transfer deadline on January 31st before being loaned back to River Plate for the remainder of the campaign. While Alvarez's comparisons to former...
PREMIER LEAGUE・1 DAY AGO

At just 18 years of age, Finley Burns looks like one of the most promising youngsters emerging from the Manchester City academy. So much so, that the English defender was entrusted by Pep Guardiola to make his senior debut this season, starting in the club's 6-1 win against Wycombe Wanderers in the Carabao Cup.
PREMIER LEAGUE・3 HOURS AGO
CityXtra

The search for Europe's brightest prospects follows a similar trend set by Manchester City and the City Football Group in South America, where the football conglomerate has set a reputation for being the first to emerging talents. That search in South America most recently took them to River Plate's Julian...
PREMIER LEAGUE・2 DAYS AGO
CityXtra

It was recently confirmed by none other than transfer expert Fabrizio Romano this week that Julian Alvarez’s move to Manchester City from Argentine giants River Plate was all but done. With a report claiming that the official announcement for the Argentine international would be made before Friday of this...
PREMIER LEAGUE・1 DAY AGO

Ever since the Abu Dhabi Group's takeover of Manchester City in 2008, the ultimate goal has been to lift the Champions League trophy. By appointing Ferran Soriano and Txiki Begiristain, the hierarchy put everything in place to ensure the appointment of Pep Guardiola as manager - one of the sports' serial winners.
UEFA・20 HOURS AGO
CityXtra

It’s fair to say that Manchester City have been in a league of their own so far this season. Sitting nine points clear at the top of the Premier League table and only recently seeing an end to their incredible 12-game winning streak, Manchester City have swatted past teams without the presence of a natural striker.
PREMIER LEAGUE・1 DAY AGO
CityXtra

The Manchester City defender was dismissed with eight minutes remaining in the club's 2-1 defeat to RB Leipzig in Germany, on matchday six of their Champions League group stage campaign in December. Speaking during a recent interview on the subject of his dismissal against the Bundesliga side, Kyle Walker said,...
UEFA・22 HOURS AGO
The Independent

Mohamed Salah fired seven-times winners Egypt into the Africa Cup of Nations quarter-finals as they edged past Ivory Coast in a dramatic penalty shoot-out after a goalless draw.The Liverpool striker converted the Pharaohs' fifth spot-kick after substitute goalkeeper Gabaski had kept out Eric Bailly's casual effort to secure a 5-4 victory and a last eight showdown with Morocco.Egypt were first to threaten when striker Omar Marmoush rattled the bar with a curling 17th-minute effort, and Ivory Coast keeper Badra Sangare had to tip over Salah's dipping attempt.However, the Elephants responded as the half-time whistle approached when Ibrahim Sangare forced Mohamed...
SOCCER・2 DAYS AGO

Wolves have turned Hwang Hee-chan’s loan from RB Leipzig into a permanent deal.Hwang moved to Molineux in the summer, with Wanderers having the option to buy the South Korea international.The Premier League club have activated that clause in the agreement and the 26-year-old will sign a deal until 2026 at the end of this season.“With every new signing you have to expect a period of settling in and adapting to their new environment, but straight away, Hee Chan has shown exactly what we expected of him as a player, but he’s also settled in quickly and made an impact,” Wolves’...
PREMIER LEAGUE・2 DAYS AGO
Daily Mail

Traore furore! Wolves star Adama is finalising a loan move to BARCELONA after snubbing a permanent Tottenham switch, leaving Antonio Conte still stuck with none of the signings he demanded from Daniel Levy

Adama Traore is finalising a loan move to Barcelona after his switch to Tottenham stalled. The Spanish side are offering a loan with £30million option to buy for the 26-year old. Traore was expected to join Tottenham this week but was not sold on the idea of converting to...
PREMIER LEAGUE・2 DAYS AGO
The Independent

Manchester United’s Zidane Iqbal has revealed his pride as he prepares to make his senior international debut.The midfielder, of Pakistani and Iraqi heritage, is poised to make his Iraq bow on Thursday.The 18-year-old flew to join the squad on Sunday and could make his debut when Iraq, the country of his mother’s birth, face Iran in a crucial World Cup qualifier at the Azadi Stadium in Tehran.“It’s another milestone I’m going to hit, my first-team debut for Iraq. I’m looking forward to it and it’s a big game, so hopefully we can win,” he told manutd.com.“Me choosing to play for...
PREMIER LEAGUE・2 DAYS AGO
CityXtra

Ever since Luka Ilic signed for Manchester City, the youngster has been identified as one to watch for the future, and tipped to emulate the success seen within the game from his brother in Serie A. However, the Serbian midfielder's career up until now has been defined by a series...
PREMIER LEAGUE・2 DAYS AGO
CityXtra

A glimpse of James McAtee on the pitch would give one an insight into just how high his ceiling is. Despite the City youth graduate being relatively untested at the highest level, it has been claimed that a host of Premier League clubs including Brighton, Aston Villa and Leicester have shown an interest in his signature - an indication into how highly-rated the 19-year old is.
PREMIER LEAGUE・1 DAY AGO
CityXtra

Manchester City made club history last season, by reaching their first ever Champions League final following a series of knock-out round victories against Borussia Monchengladbach, Borussia Dortmund, and PSG. While they ended up tasting defeat to Chelsea on the day, the club had made unchartered territory for the first time...
PREMIER LEAGUE・21 HOURS AGO
CityXtra

McAtee, who has made three senior appearances for Manchester City this season, including his Premier League debut against Everton in November, is being eyed by a series of clubs across England on loan ahead of the transfer deadline on January 31. The 19-year-old has scored 14 goals in 15 appearances...
PREMIER LEAGUE・2 HOURS AGO