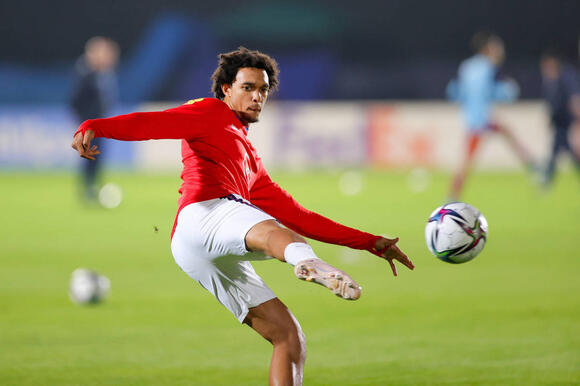 Trent-Alexander Arnold has been nothing but outstanding so far this season.

The full-back from West Derby has provided nine assists already in all competitions, including two against Arsenal.

He whipped in a delightful free-kick which Sadio Mane gratefully lapped up for Liverpool's opener, then crossed intelligently for Takumi Minamino to round off another dominating Reds performance.

He's level with Paul Pogba and Mohamed Salah at the top of the assist charts in the Premier League with seven, so how many would he like to achieve?

“I just want to be contributing as much as I can. I would probably say this season would be 15 to 20 [assists] in the league. And keep ahead of Andy Robertson? Yes, so far!"

Alexander-Arnold currently holds the Premier League record for assists by a defender with 12 in 2018/19, and despite a poor season last time out he still managed seven.

Having equalled that already this season added to a stunning free-kick against West Ham United, he's on course for his best season yet.

Liverpool manager Jurgen Klopp believes defender Trent Alexander-Arnold is a unique talent with an “insane” skill-set. The right-back took his tally of assists this season to 14 with a couple in the Carabao Cup semi-final second-leg victory over Arsenal on Thursday. Since the start of the 2018-19 season,...
PREMIER LEAGUE・14 HOURS AGO
Tribal Football

Liverpool boss Klopp scoffs at Alexander-Arnold critics: I saw it on the TV!

Liverpool boss Jurgen Klopp has taken aim at Trent Alexander-Arnold's critics after his superb performance in their Carabao Cup win at Arsenal. The fullback provided both assists for the 2-0 semifinal second-leg win. “I don't know anybody who is like Trent, who is a right-back and is that decisive and...
PREMIER LEAGUE・14 HOURS AGO
Telegraph

Liverpool manager Jurgen Klopp says there is no player in world football like Trent Alexander-Arnold and berated enduring claims the full-back lacks defensive prowess. Alexander-Arnold’s attacking power has never been in doubt, his latest contribution in Thursday’s Carabao Cup semi-final victory over Arsenal underlining his extraordinary productivity. In...
PREMIER LEAGUE・14 HOURS AGO

Watch: “I don’t know anybody who is like Trent” – Jurgen Klopp eulogises Trent Alexander-Arnold

Jurgen Klopp was posed the question of how unique Trent Alexander-Arnold is as a footballer and the boss was full of praise for his player. Our No.66 produces attacking numbers that are unlike anyone else in his position, he defends like a defender and attacks like one of the greatest passers in the world.
PREMIER LEAGUE・2 HOURS AGO
The Independent

Ralf Rangnick stood by his decision to substitute Cristiano Ronaldo despite the striker’s angry reaction during Manchester United’s 3-1 win at Brentford.Goals from Anthony Elanga, Mason Greenwood and Marcus Rashford boosted Manchester United’s top-four ambitions.But the spotlight was once again on Ronaldo, who was far from impressed when his number came up with 20 minutes left.The striker trudged off slowly before hurling his coat to the floor as he sat down muttering “why?”.However, United interim boss Rangnick said: “He was asking ‘why me’?. But I told him I take the decisions in the interest of the team.“We were 2-0 up...
PREMIER LEAGUE・2 DAYS AGO
The Guardian

Arsenal are set to play host to Liverpool at the Emirates this evening with a place in the EFL Cup final on the line. The Gunners earned a strong position going into this game in extremely tough circumstances last week. Whilst missing a number of players for various reasons, and with Granit Xhaka getting himself sent off inside the opening 30 minutes, we managed to fight until the bitter end to earn a 0-0 draw.
PREMIER LEAGUE・1 DAY AGO

Leicester vs Tottenham live stream: How to watch Premier League fixture online and on TV tonight

Tottenham Hotspur will look to further their Champions League push when they travel to Leicester City in a rescheduled Premier League fixture tonight. Both teams have several games to catch up on following latest postponements at the weekend, with Spurs four points behind fourth-placed West Ham having played four games less.FOLLOW LIVE: Team news and all the action as Brentford host Manchester UnitedA win tonight would also see them go above Arsenal in the table after Sunday’s north London derby was postponed. Antonio Conte’s side were comfortably beaten by Chelsea in the Carabao Cup semi-finals but have not been in...
PREMIER LEAGUE・2 DAYS AGO
The Independent

Man City are ‘by far the best’ and have Premier League title sewn up, claims Ralph Hasenhuttl

Southampton manager Ralph Hasenhuttl believes Manchester City already have the Premier League title in the bag ahead of their visit to St Mary’s.Reigning champions City travel to the south coast 11 points clear of second-placed Liverpool following a remarkable 12-match winning run.Jurgen Klopp’s Reds and third-placed Chelsea had threatened to make it one of the most exciting title races in years before significantly falling off the pace in recent weeks.Hasenhuttl, who masterminded a creditable goalless draw at the Etihad Stadium in September, is in awe of the way Pep Guardiola’s relentless side have blown away their rivals.“If it wouldn’t be...
PREMIER LEAGUE・1 DAY AGO
The Guardian

Liverpool's Diogo Jota has opened the scoring against Arsenal in the second leg of the Carabao Cup semi-final. Even though Arsenal have on top during the opening 20 minutes, Liverpool are the first to get the ball in the back of the net. Thanks to another assist by Trent Alexander-Arnold,...
PREMIER LEAGUE・1 DAY AGO

Alan Shearer ‘not having’ Thomas Tuchel’s reasoning for Brighton draw

Alan Shearer believes that Thomas Tuchel’s claim that Chelsea’s players are “tired” is no excuse for their poor form given the strength of the squad at the German’s disposal.A draw at Brighton on Tuesday evening was Chelsea’s seventh in their last 13 Premier League games, a run that has seen them fade from the title race.Tuchel said afterwards that his players need “some days off” having been left fatigued by a busy period.However Shearer, casting his eye over an impressive away bench at the Amex Stadium, believes that Tuchel is in no place to complain, and that fatigue was not...
PREMIER LEAGUE・2 DAYS AGO
LFCTransferRoom

Liverpool have joined fellow Premier League sides Chelsea and Manchester United as they start their interest in Barcelona defender Ronald Araujo. Araujo's contract situation has put several clubs on alert, with the Uruguians contract running out in the summer of 2023. Reports from Mundo Deportivo suggest that the Reds have...
PREMIER LEAGUE・2 DAYS AGO
The Independent

Saturday, 3pm matches don’t always feature teams in the spotlight, those creating the biggest stories, so it’s a change of pace this weekend. Newcastle - and all the money and mayhem that comes with them right now - are in action at the same time as Manchester United host West Ham, both those sides fighting it out for a Champions League or Europa League spot.And so are Wolverhampton Wanderers.Bruno Lage’s side haven’t yet taken too much focus in the wider Premier League picture, but perhaps they are about to. They have won only one fewer than Man United, lost only...
PREMIER LEAGUE・1 DAY AGO
LFCTransferRoom

Ahead of the Carabao Cup semi final second leg against Arsenal on Thursday, Pep Lijnders has given an injury update on Liverpool’s missing players. The game at The Emirates will see the two teams play for the right to play Chelsea in the final at the end of February.
PREMIER LEAGUE・2 DAYS AGO
The Independent

Caretaker manager Duncan Ferguson will demand Everton players “run themselves into the ground” after dishing out a few “home truths” following the sacking of Rafael Benitez.Benitez spent less than seven months in charge at Goodison Park and lost his job following Saturday’s 2-1 loss at Norwich, a ninth defeat in 12 Premier League games.The Toffees now sit just six points above the relegation zone, with former Liverpool boss Benitez paying the price for the poor run of form and Ferguson taking charge for the club’s “upcoming games”, starting with Saturday’s visit of Aston Villa.It is Ferguson’s second spell as caretaker...
PREMIER LEAGUE・1 DAY AGO
The Independent

Liverpool assistant manager Pep Lijnders has no complaints over recent Covid-19 postponements both in the Premier League and the Carabao Cup as he stated his trust in club medical departments to make the right call.Liverpool travel to the Emirates Stadium on Thursday to play the second leg of their League Cup semi-final against Arsenal a match which should have been the first leg two weeks ago before a coronavirus outbreak within the Reds camp saw it postponed.Since then, Arsenal had Sunday’s north London derby called off due to a shortage of players, a decision which prompted an angry response...
PREMIER LEAGUE・2 DAYS AGO
LFCTransferRoom

The first of the 'Best and Worst' series at LFCTR. With a recent leaked new Liverpool kit, the LFCTR team take a look back at out favourite and our not so favourite kits. Getting a Liverpool kit was an annual thing when I was growing up. Whether it was as a present or I saved up my pocket money for, the latest kit was something high on the priority list.
APPAREL・2 DAYS AGO
San Diego Union-Tribune