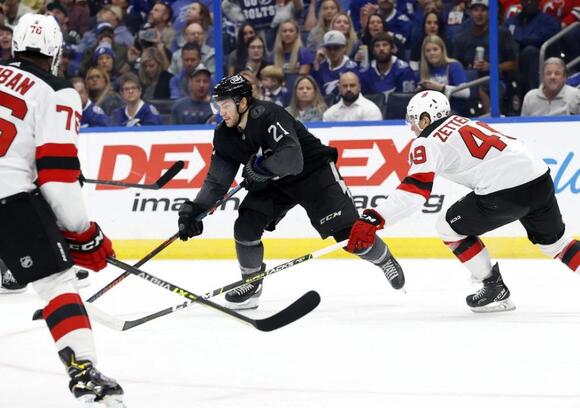 Tampa Bay Lightning star center Brayden Point will be sidelined indefinitely with an upper-body injury, the team announced during Sunday night’s game against the Minnesota Wild.

Point was injured during Saturday’s 5-3 loss to the New Jersey Devils. He crashed hard into the wall in the third period after being tripped and immediately grabbed near his left shoulder and collarbone.

A penalty shot was given to the Lightning. Point took it and hit the crossbar before finishing out the game.

Point didn’t participate in warmups prior to Sunday’s game against Minnesota and wasn’t in the lineup. Tampa Bay announced in the first period that Point will be sidelined indefinitely. 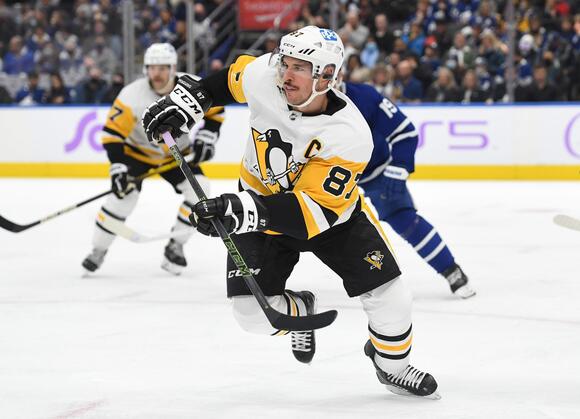 Point has seven goals and six assists in 16 games this season.

Point signed an eight-year, $76 million extension in July. The deal begins with the 2022-23 campaign and keeps Point under contract through the 2029-30 season.

The 25-year-old Point has been a key cog on Tampa Bay’s back-to-back Stanley Cup championship teams. He has 146 goals and 177 assists (323 points) in 367 games over five-plus seasons with the Lightning.

Point’s playoff performance has been ever better, as he scored the most postseason goals — 14 both times — in the NHL in each of the past two campaigns. Overall, Point has 36 goals and 37 assists in 67 postseason games.

Can the Tampa Bay Lightning make history this season?

The Tampa Bay Lightning are as good as any other team this year. Despite winning and needing to move on from some players as the price to the success they still are at the top of their game and boast a rather good team. They are the front runners once...
NHL・15 HOURS AGO
Sportsnaut

The NHL season officially started back on October 12. In this article, we track all the NHL games today as
NFL・20 HOURS AGO
6abc

TAMPA, Fla. -- Philadelphia Eagles starting defensive end Josh Sweat will miss Sunday's playoff game against the Tampa Bay Buccaneers after undergoing a medical procedure to address what the team described as a "life-threatening situation." "On Tuesday night, Josh Sweat was admitted to the hospital. He underwent an emergency procedure...
NFL・1 DAY AGO

Josh Norris scored twice, including the tiebreaking goal as the Ottawa Senators tallied five times in the third period to rally past the Edmonton Oilers 6-4
NHL・2 DAYS AGO
rawcharge.com

The Tampa Bay Lightning are slowly getting close to the halfway mark of the season. They’re currently second in their division, behind the Florida Panthers only, which have the same amount of points, but played two less games than the Bolts. Tonight’s game against the Dallas Stars is the last home game before the next week’s California trip.
NHL・2 DAYS AGO

TAMPA, Fla. (AP) — Tom Brady threw for 271 yards and two touchdowns Sunday, helping the Tampa Bay Buccaneers launch their bid for a return to the Super Bowl with a dominating 31-15 NFC wild-card playoff victory over the Philadelphia Eagles. The defending champions set the tempo from the start, with Brady leading a pair of long TD drives in the opening quarter and building the lead to 17-0 by halftime. The seven-time Super Bowl winner finished off the Eagles with TD passes of 2 yards to Rob Gronkowski and 36 yards to Mike Evans, improving his dazzling playoff record to 35-11...
NFL・1 DAY AGO
NHL

Stars (18-14-2, 38 points) vs. Lightning (25-9-5, 55 points) Redemption will be on the mind of the Stars Saturday as they close out a back-to-back against the Tampa Bay Lightning at Amalie Arena. After a 7-1 defeat on Friday against the Florida Panthers, a response is needed. The challenge, however,...
NHL・2 DAYS AGO

The start of 2022 has not been kind to the Washington Capitals, who hope to halt a season-high three-game home
NHL・13 HOURS AGO
Sports Illustrated

Discover player props odds, plays, and insights for Cameron Brate in his NFL Playoffs contest with the Tampa Bay Buccaneers against the Philadelphia Eagles.
NFL・2 DAYS AGO
CBS San Francisco

SAN JOSE (CBS SF) – On Monday, San Jose Sharks winger Timo Meier achieved something that hadn’t been done in an NHL game since 1994 – score five goals by himself – and he did it with a period to spare. Meier, who was named to the NHL All-Star game last week for the first time in his career, scored five goals against the Los Angeles Kings within the first 40 minutes of their match in L.A. Monday. The Sharks beat the Kings 6-2. Timo Meier scores his fifth goal this afternoon to set a new franchise record for goals in a...
NHL・9 HOURS AGO
Sportsnaut

The jersey retirement ceremony will take place on the anniversary of his NHL debut.
NHL・1 DAY AGO
San Diego Union-Tribune