It drives Conor McGregor 'crazy' that he's no longer one of the boys, and never will be again, UFC fighter says 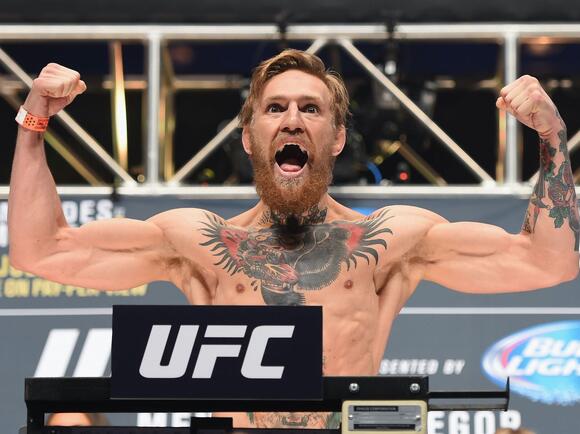 Conor McGregor is trash-talking his mixed martial arts peers because it drives him crazy that he'll never again "be one of us."

That's according to the UFC light heavyweight Anthony Smith, who himself has been on the receiving end of McGregor's ire.

McGregor, Smith says, is a millionaire, with a young family, and a lot of success when it comes to MMA as a two-weight UFC champion.

However, he no longer has the camaraderie that comes with regular training at a fight club, and appears to have lost the support of the locker room.

"He's made more money than he could ever spend. He's made true, like, generational wealth. Like, his kids' kids' kids' kids are going to be just fine because of the things that Conor's accomplished.

"What Conor can never get back, is he'll never be one of us again, and it drives him absolutely crazy."

The 33-year-old McGregor has endured a tumultuous time since suffering a broken leg and stoppage loss to Dustin Poirier in the summer — his second of the year having been knocked out by the American in January.

In September, he threw a drink at Machine Gun Kelly on the VMAs red carpet , then called the rapper a "little vanilla boy."

The next month an Italian DJ accused Conor McGregor of punching him "for nothing," and breaking his nose at a party in Rome.

Multiple people have accused him, without evidence, of abusing drugs. The internet sensation Jake Paul claimed Conor McGregor was "coked up" in a tweet that mocked the Irishman.

Earlier this month, UFC welterweight Jorge Masvidal said McGregor is "losing his mind" because of a "shortage of cocaine" in Ireland.

Away from the UFC Octagon and away from Twitter, McGregor appears to enjoy the trappings of his success.

He posts photos of his frequent lavish vacations on Instagram, he walks red carpets, drives fancy cars, and has befriended celebrities like Drake, whose recent album-release party he attended.

But this, Smith says, puts him at odds with the vast majority of fighters.

McGregor, a worldwide celebrity, may miss just being one of the guys, Smith said

Smith said McGregor "alienated" himself from "everybody" on the UFC roster.

He continued: "He'll never fit in in our group. He's not one of our peers anymore. And it's not because we kicked him out and didn't want him. It's the total opposite.

"We wanted Conor to be one of us, and he alienated all of us, and now he wants back in and we're not going to let him in because he shit on every single one of us.

"It's the comments he makes. He wants the whole world to think that he's the cool guy and we're not, when in all reality, in our, like, private situations and in our small world, he's the outsider.

"He's the one that no one's letting back in."

A Dublin pub owned by Conor McGregor was targeted on Wednesday night, according to police, who confirmed they are investigating an “incident of attempted criminal damage”. Police attended the scene at the Black Forge Inn on the same night the UFC star reportedly hosted a taste-testing evening in the Irish capital. Social media posts from the former UFC champion confirmed that he had been at the venue on Wednesday. Police confirmed that no damage had been done to the pub as they called for witnesses. A spokesperson said: “Gardai are investigating an incident of attempted criminal damage at a...
PUBLIC SAFETY・4 DAYS AGO
fightsports.tv

Conor McGregor’s business was the target of a nasty attack. According to The Mirror, The Black Forge Inn, McGregor’s upscale pub, was targeted with “petrol bombs,” commonly referred to as Molotov cocktails. The pub is also the location of McGregor’s infamous fight with an old man.
PUBLIC SAFETY・3 DAYS AGO
TheDailyBeast

An investigation is underway after petrol bombs were lobbed at UFC fighter Conor McGregor’s Irish pub in Dublin last night. Two pipe bombs were also found outside the bar, The Black Forge Inn, which fortunately wasn’t damaged in the incident. No injuries were reported and investigators are scouring for surveillance footage and witnesses to help locate the gas-slinging scofflaws. Upon purchasing the pub in his hometown in 2019 for two million pounds, McGregor refurbished the establishment with, as reported by the The U.S. Sun, “a giant medieval-like long table and a large glass cabinet full of his signature whiskey.”
PUBLIC SAFETY・4 DAYS AGO

Former UFC lightweight champion Conor McGregor was holding a special menu tasting event at his Black Forge Inn on Drimnagh Road in Dublin 12 on Wednesday night, when two men on scooters launched fire bombs at the establishment during a drive-by attack. McGregor, 33, was not on premises at the...
PUBLIC SAFETY・4 DAYS AGO
firstsportz.com

A day after yesterday Conor Mcgregor’s Dublin bar, the Black Forge was reportedly attacked by petrol bombs. Mcgregor took ownership of the pub in 2019 and paid a whopping £2 million for it. The former UFC double champion often posts pictures while spending time in this pub as it hosts guests from all around the world.
PUBLIC SAFETY・2 DAYS AGO
Insider

2 petrol bombs were thrown at Conor McGregor's Dublin pub while he was inside, report says

Reports in Ireland suggest police responded to an incident at the Black Forge Inn, which is owned by the former UFC champion Conor McGregor.
PUBLIC SAFETY・4 DAYS AGO
ESPN

Police in Ireland are investigating an alleged attack on a bar owned by UFC superstar Conor McGregor, according to the establishment's management. Management of the Black Forge Inn in Dublin said in a statement that the alleged attackers "made an unprovoked effort to inflict damage" on the upscale pub Wednesday night. Per the statement, no patrons or employees were injured and no damage was done to the bar. McGregor was not there at the time of the alleged attack.
PUBLIC SAFETY・3 DAYS AGO

A pub owned by UFC superstar Conor McGregor was petrol bombed overnight, according to information provided by The Sun. The report notes that McGregor splashed £2m of his fight earnings on the pub, named the Black Forge Inn, which is situated in Crumlin, Dublin. He has frequently shared photos...
PUBLIC SAFETY・4 DAYS AGO
USA TODAY Sports Media Group

Subject of viral video sounds off on Nate Diaz after flinching incident: 'You think this man is a gangster?'

The man who was caught on video spilling his beer because of Nate Diaz has identified himself, and he’s none too pleased about the situation – or the fact that people herald Diaz as a “gangster.”. In a viral video posted early Sunday morning, Diaz is seen...
TAMPA, FL・27 DAYS AGO
The Independent

Following one of the most successful and engrossing years in the history of the UFC, the mixed martial arts promotion will look to keep building in 2022.2021 saw Conor McGregor fight twice, marking his most active year since 2016. The Irishman lost to Dustin Poirier in each outing, suffering a horrific broken leg in the most recent, but he is targeting a summer return to the Octagon.Elsewhere, newer stars like Israel Adesanya, Khamzat Chimaev and Sean O’Malley will look to further enhance their legacies and profiles, while featherweight queen Amanda Nunes will surely seek to regain her bantamweight belt...
UFC・1 DAY AGO
ClutchPoints

Francis Ngannou is heading into his possible last fight in the UFC when he defends his heavyweight title on January 22. The Cameroonian heavyweight recently revealed some of the demands he has for his new contract, they involve boxing. Francis Ngannou isn’t simply motivated by money, he has always wanted...
TYSON FURY・13 DAYS AGO

Tyson Fury has doubled down on his call-out of Francis Ngannou, laying the foundations for a “clash of the titans” in Las Vegas.Fury is WBC heavyweight boxing champion, while Ngannou holds the UFC heavyweight title, and the pair have expressed interest in fighting one another.French-Cameroonian Ngannou this month tried to goad Fury into an MMA contest with boxing gloves, but the Briton said he would prefer a boxing match with MMA gloves.Fury has now reiterated his desire to box Ngannou, whose first UFC title defence is scheduled for the main event of UFC 270 next week.“Think of the clash...
UFC・2 DAYS AGO
The Independent

John Cena has revealed he had three beers before taking on The Undertaker in a surprise match at WrestleMania 34.Cena took on the iconic WWE wrestler at the event in 2018 before both stars retired from the sport. Cena took his bow in 2021 and The Undertaker, real name Mark Calaway, retired in 2020. Cena has now said he had three beers ahead of the clash.“Everybody is chilled and watched the show,” he told Pat McAfee on his podcast Then I made great friends with some people who traveled from Australia, people who traveled from across the US, buying each...
WWE・2 DAYS AGO
The Independent

Kamaru Usman has offered his prediction for the main event of UFC 272 in March, with friends-turned-rivals Jorge Masvidal and Colby Covington set to go head-to-head.Usman has successfully defended the UFC welterweight title against both men twice, most recently outpointing Covington in November.While Usman’s rivalries with both fighters have been somewhat intense, they do not compare to the dynamic between Masvidal and Covington, whom fans have wanted to see compete in a grudge match for a number of years.Per the Mirror, Usman was asked to predict the winner of that fight on Snapchat, and the Nigerian-American simply replied: “Colby.”Usman...
UFC・2 DAYS AGO
SPORTbible

Dana White's war of words with Jake Paul has escalated into a huge rivalry, and now one retired UFC star has offered to take on the YouTuber for his former boss, in exchange for a UFC title fight. Paul has made a name for himself in the boxing world by...
UFC・2 DAYS AGO
The Independent

The UFC’s heavyweight titles will be unified in the main event of UFC 270 this weekend, as Francis Ngannou defends against interim champion and former teammate Ciryl Gane.Ngannou (16-3) is 11-2 in the UFC, with 10 of his wins in the promotion coming via knockout/TKO and the other by way of submission. Most of the French Cameroonian’s KOs come very early, and in his last bout he knocked out Stipe Miocic in the second round to take the American’s heavyweight title.That was in March, with Ngannou avenging a decision defeat by Miocic in the process, while Gane (10-0) fought...
UFC・8 HOURS AGO
The Independent

Kamaru Usman’s next welterweight title defence will “100 per cent” come against Leon Edwards, according to UFC president Dana White.Usman (20-1) won the belt from Tyron Woodley in 2019 and has since retained it five times – against three different opponents.The Nigerian-American has twice successfully defended the gold against Jorge Masvidal and Colby Covington respectively, with his most recent win coming against the latter in November. Between those bouts, Usman beat friend and former teammate Gilbert Burns.Now, Usman is set for another rematch, with White confirming that Briton Edwards (19-3) will challenge the 34-year-old next.“One hundred per cent,” the...
UFC・2 DAYS AGO
The Independent

In the main event of UFC 270 this Saturday, Francis Ngannou makes the first defence of his heavyweight title as he comes up against interim champion and former teammate Ciryl Gane.Ngannou is 16-3 in professional mixed martial arts and 11-2 in the UFC, with all of his wins in the promotion coming via stoppage – 10 by knockout/TKO and one by submission. In his last outing, the French-Cameroonian avenged a 2018 decision loss to Stipe Miocic by knocking out the American to take his heavyweight title in March.Meanwhile, Gane (10-0) is more known for his speed and technicality than...
UFC・8 HOURS AGO
Sportsnaut