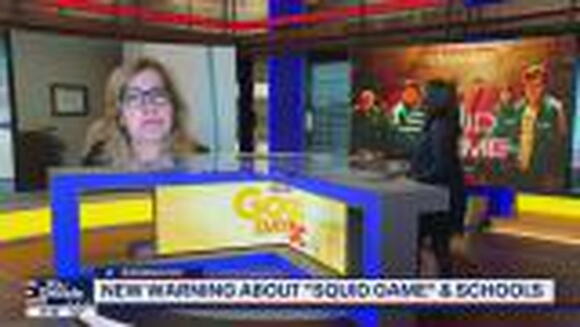 A child in southern Australia has been hospitalised after suffering serious burns while attempting to participate in a viral TikTok challenge inspired by the Netflix series Squid Game .

While the child’s identity has not been revealed, burns specialist Dr Amy Jeeves of the Women’s and Children’s Hospital in Adelaide told 7NEWS that at least one child had presented to the hospital with a “nasty burn” after handling hot honeycomb.

Squid Game , a Korean-language thriller that is streaming on Netflix, explores a dystopian reality in which a mysterious organisation recruits people in severe debt to compete in a series of deadly children’s games for the chance to win 45.6bn won (£28.5m).

In one of the games in the show, players are asked to carve out a symbol etched into a brittle sugar candy called dalgona, a honeycomb-style sweet, without cracking the whole piece. Dalgona is typically sold with a variety of shapes but Squid Game featured four, a triangle, circle, star, and an umbrella.

The game has gone viral on social media, with users attempting to recreate the challenge on TikTok.

The sweet is made with melted sugar and baking soda, which is then poured onto a flat surface and stamped with a mould with the desired pattern. Most injuries occur during the heating or the pouring process.

“You need to heat up the sugar to about 145C, the contact time for the extra hot sticky liquid is what causes the severe burns,” Dr Jeeves said.

This is not the first accident involving the dalgona candy challenge.

Last month, a children’s hospital in Sydney issued a warning against the challenge after three children were admitted for injuries, ranging from mild burns to nerve damage, acquired while handling honeycomb. One of the three children, a 14-year-old, suffered deep burns to his hand and nerve damage.

And such incidents are not limited to Australia, with schools and hospitals in the UK also issuing similar warnings. Earlier this month, Birmingham Children’s Hospital’s specialist burn centre warned families after it noted a worrying increase in the number of young people suffering injuries after attempting to recreate Squid Game challenges.

The South Korean thriller has become the most streamed show on Netflix, with around 111 million viewers watching the show within just the first two and half weeks of its release.

'All of Us Are Dead,' Netflix Teases K-Drama With 'Squid Game' Star: Cast and Plot Details

If you loved Squid Game and Hellbound, put this new Netflix K-drama on your list

Don't Miss: Monday’s deals: $10 COVID tests, $140 AirPods 3, $30 Fire TV Stick 4K, more Netflix gave fans of Korean TV shows and movies a bumper crop of riches to enjoy in 2021, a trend that already looks set to continue in 2022. On the heels of the release of two recent TV shows in this genre — Squid Game and Hellbound, the former being one of the biggest Netflix releases of all time — a new TV series is set to hit the streamer later this month. Based on what started as a digital comic on Webtoon, All Of...
TV SHOWS・4 DAYS AGO
Newsweek

Hwang Dong-hyuk, the writer-director of the runaway hit, has revealed details of the "big plot" for the second season of the K-drama.
TV & VIDEOS・14 DAYS AGO
TVOvermind

Late in 2021, Netflix’s Squid Game became an international sensation and the popular Netflix exclusive became the most-watched show on the streaming site. The premise of Squid Game is simple, 500 people, who are massively in debt, compete for a cash prize that is worth billions of dollars. The twist? The players eliminated would result in death. The thrilling Netflix show made us squirm, cry, and bite our nails throughout its jam-packed nine episodes. This list will examine the five best characters of the series and highlight what makes each of the Squid Game characters unique and special.
TV SERIES・12 DAYS AGO

A guy on Twitter hatched a plan to get back at his ex who was using his Netflix Inc (NASDAQ: NFLX) account to watch the hit show “Squid Game.” The people of Twitter obliged with creative ways to add more pain to the errant ex’s life. What...
TV & VIDEOS・8 DAYS AGO
Primetimer

That's up from 15 in 2021. In fact, last year, Netflix invested more than half a billion for Korean content. Squid Game's monster success was followed by Korean hits like Hellbound and The Silent Sea.
TV SHOWS・1 DAY AGO
CharlotteObserver.com

Netflix (NFLX) - Get Netflix, Inc. Report is leaning into the success of Squid Game by unveiling a slate of new shows from South Korea set to debut in 2022. Netflix is developing a high school zombie show called "All of Us Are Dead; Money Heist: Korea - Joint Economic Area, an adaption of a popular Spanish series; and Seoul Vibe, an action film placed against the backdrop of the 1968 Seoul Olympic Games.
TV & VIDEOS・15 MINUTES AGO
Complex

Following the explosive popularity of titles like Squid Game and Hellbound, Netflix will release multiple Korean features in 2022, with 25 originals slated for release this year. Don Kang, the streaming service’s Vice President of Korean Content, told the Hollywood Reporter on Wednesday that the company is “excited to continue...
TV & VIDEOS・1 DAY AGO

'Archive 81' Is the Latest Netflix Craze — Where Was the Horror Show Filmed?

Less than a week since its premiere, Archive 81 has already hit No. 1 among Netflix's Top 10 in the US. The newest horror series has been making a splash with rave reviews, almost immediately topping the charts as one of 2022's first streaming sensations. Already, the show has generated plenty of buzz with its unique spin on horror. The story is very focused on key locations, but where was the show actually filmed?
TV SERIES・2 DAYS AGO
The Independent

Netflix’s smash hit Squid Game has become the first foreign-language TV series to be nominated for a Screen Actors Guild (SAG) award. Hwang Dong-hyuk’s dystopian show will compete against shows such as Succession, The Morning Show, and The Handmaid’s Tale for the 2022 award for best drama ensemble. Tick Tick...BOOM! actor Vanessa Hudgens and Dopesick star Rosario Dawson announced the full list of nominees in an Instagram Live on Wednesday (12 January). Squid Game actors Lee Jung-jae and Jung Ho-yeon are also in the running for best male and female actor in a drama series, respectively. With a...
TV SERIES・7 DAYS AGO
Business Insider

Netflix's 12 biggest TV shows of all time, including 'The Witcher' and 'Squid Game'

The most popular Netflix original shows of all time, based on viewing hours, include "Squid Game," "The Witcher," and "Bridgerton."
TV SERIES・2 DAYS AGO
Popculture

Stay Close has been another mystery thriller hit for Netflix since it was released on New Year's Eve. The eight-episode limited series was based on the novel of the same name by Harlan Coben, who also scripted the show and is an executive producer. The show has been remaining in the Netflix Top 10 global charts since its premiere and climbing week after week.
TV SERIES・2 DAYS AGO
geekositymag.com

Netflix is developing Squid Game into a movie. However, it’s not live-action; instead, it’s an animated film. Last year, millions worldwide binged on the South Korean drama. Squid Game has become Netflix’ most-watched show. The show garnered incredible international attention which even gained nominations from the Critics...
TV & VIDEOS・14 DAYS AGO
The Hollywood Reporter

The finale of Hawkeye on Disney+ helped drive the show’s biggest viewing tally in the week of Dec. 20-26. Netflix’s The Witcher, meanwhile, grew in the week after its second season premiered and remained far and away the most watched title in Nielsen’s streaming rankings. Hawkeye recorded 938 million minutes of viewing time during Christmas week, the best tally of its run on Disney+ — beating out the 853 million minutes for its two-episode premiere a month earlier. It was up about 62 percent from the previous week and tied for second place among original series with Emily in Paris, whose...
TV SERIES・25 MINUTES AGO
Daily Mail

An Indian farmer was left astonished yesterday after one of his goats gave birth to a kid with the 'face of a human' which neighbours described as a 'warning from God'. The goat belonging to farmer Shakar Das, 46, gave birth to several offspring in Gangapur village in the northeastern Indian state of Assam.
INDIA・22 DAYS AGO
DesignerzCentral

Prince Harry Suffers From A Severe Mental Illness – What It Is

During the documentary ‘The Me You Can’t See’, Prince Harry talked about the mental disorders he has suffered from for years. If the statements of Prince Harry about the British royal family were reported by all the international media and are still talked about today.
MENTAL HEALTH・4 DAYS AGO
higherperspectives.com

A self-proclaimed time traveler’ has found a way to communicate with all the way 2714, aver a thousand years from today, to warn us of major events taking place early in 2022. It's unclear whether his purpose is to help us prevent any of it from happening, or if it is meant to happen anyway and he is simply wanting us to prepare.
GOOGLE・3 DAYS AGO
The US Sun

Giant cat looks set to break world record after weighing in at 27.5lb

NO kitten around — Yulia Minina’s pet looks furmidable. She says the Maine Coon weighs 12.5kg (27.5lb), making it just a whisker away from a world record. And as Kefir is only 22 months, she still has growing to do in Stary Oskol, Russia. Yulia explains: "I could...
PETS・1 DAY AGO
The Independent

A woman has thanked one of her fellow gym members for not staring at her as she does squats, and she is sparking a debate on social media for doing so.In a TikTok video posted on 1 January, @libbychristensen was squatting on an exercise machine, as a man was sitting on a bench behind her. @libbychristensen ty for your service kind sir #gymtok #girlwholift #YerAWizard ♬ The Golden Girls - The Main Title Theme - TV Themes “I just need to shout out this man who was behind me while it was hack squatting bc I...
WORKOUTS・5 HOURS AGO
The US Sun

HANNIBAL Rising star Gaspard Ulliel has died after suffering a serious head injury in a horror skiing accident in the Alps. The 37-year-old model and actor was rushed to hospital in a serious condition after the incident in the La Rosière ski resort in the Savoie region on Tuesday.
CELEBRITIES・1 DAY AGO