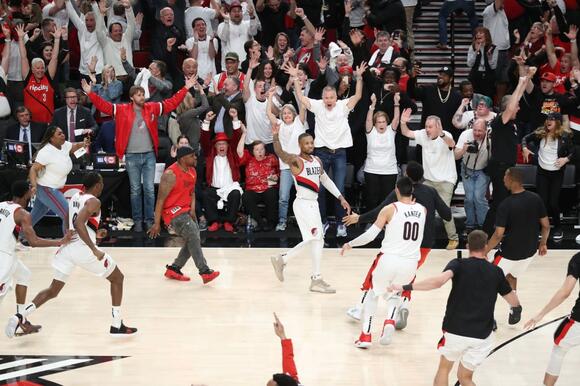 Damian Lillard of the Portland Trail Blazers sent out a tweet about the Las Vegas Raiders on Sunday.

Damian Lillard and the Portland Trail Blazers defeated the Philadelphia 76ers 118-111 on Saturday night to advance to 9-8 on the season in their first 17 games.

Lillard went off for 39 points and seven assists in the game.

The Raiders got crushed by the Cincinnati Bengals 32-13 on Sunday to fall to 5-5 on the season.

As for the Trail Blazers, they are coming off two seasons in a row where they have lost in the first round of the playoffs.

They made the Western Conference Finals (but got swept by the Golden State Warriors) in 2019.

However, they have been on a downtrend since then.

More on the Las Vegas Raiders can be read here.

Jusuf Nurkic had 29 points and 17 rebounds as the visiting Portland Trail Blazers held the Boston Celtics without a
NBA・15 HOURS AGO
watchstadium.com

Damian Lillard underwent abdominal surgery. Shams Charania discusses how long he has been playing with the injury and his timeline for a return this season.
NBA・1 DAY AGO
Lakers Nation

A potentially major development occurred in the Los Angeles Lakers’ 111-104 loss to the Indiana Pacers on Wednesday. With 3:52 left in the fourth quarter, head coach Frank Vogel deployed Malik Monk onto the court, taking Russell Westbrook out of the game in crunch time — an adjustment rarely seen in the first half of the 2021-22 season. About four minutes earlier, L.A. had lost its lead that they held onto for the majority of the game.
NBA・1 DAY AGO
FastBreak on FanNation

Kyrie Irving and the Brooklyn Nets beat the Washington Wizards on Wednesday evening.
NBA・2 DAYS AGO

The NBA has announced that Kyrie Irving has been fined $25,000 for an interaction with a fan during the Brooklyn Nets loss to the Cleveland Cavaliers on Monday.
NBA・1 DAY AGO
The Spun

Just a few days ago, Dallas Cowboys quarterback Dak Prescott made headlines with a controversial comment he made about the officials from Sunday’s game. Following the 23-17 loss to the San Francisco 49ers, Cowboys fans threw objects onto the field, expressing their anger with the officiating crew. After learning fans threw objects at the officials, Dak responded, “Credit to them.”
NFL・1 DAY AGO

The Golden State Warriors lost to the Indiana Pacers at home on Thursday night, and after the game Steph Curry spoke to the media.
NBA・1 DAY AGO
fadeawayworld.net

Michael Jordan is perhaps, the biggest legend in the history of the NBA. Jordan is considered by many people as the greatest player to ever play the game of basketball. MJ is an icon, a superstar that any team would love to have had on their team. But one of his former assistant coaches once advised Phil Jackson to take him out of a game during the NBA Finals.
NBA・2 DAYS AGO
95.7 The Game

According to The Athletic’s Shams Charania, the Brooklyn Nets have agreed to find big man Paul Millsap a new team
NBA・22 HOURS AGO

The Sacramento Kings appear to be trying to make a move for both Ben Simmons and Tobias Harris, but the 76ers remain unmoved by any offers they’ve received.
NBA・2 DAYS AGO
USA TODAY

Luka Doncic has many of the same flaws as Russell Westbrook but gets far less criticism. He may not be able to outrun it much longer.
NBA・21 HOURS AGO
95.7 The Game

The problem for the Miami Heat this season isn’t necessarily the technical fouls. It’s the ones that come in pairs, particularly against the Portland Trail Blazers. Two weeks ago, it was point guard Kyle Lowry called for two first-half technical fouls and ejected in Portland. Wednesday night, it was consecutive technical fouls on forward Jimmy Butler that led to his first-half ejection at FTX ...
NBA・2 DAYS AGO
Insider

Russell Westbrook and the Lakers are running out of answers after he was benched during the team's loss to the Pacers.
NBA・2 DAYS AGO
The Daily Memphian

Fan voting for the game ends on Jan. 22, with the starters announced on Jan. 27.
NBA・1 DAY AGO
FastBreak on FanNation

Kevin Love sent out a tweet about the Phoenix Suns who defeated the Dallas Mavericks on Thursday.
NBA・1 DAY AGO