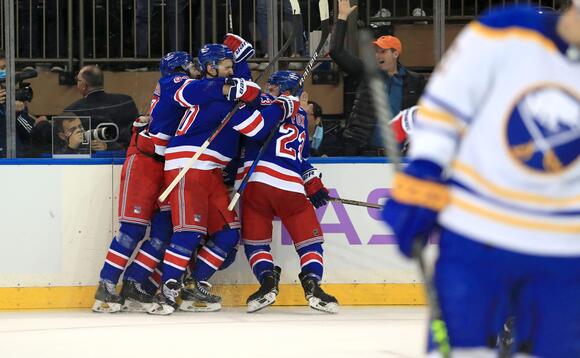 A goal with less than one second remaining in regulation helped the New York Rangers defeat the Buffalo Sabres, 5-4, on Sunday night at Madison Square Garden.

Rasmus Asplund broke the scoreless tie with a power play goal late in the opening period. The forward's fifth goal of the season came on a rebound opportunity in front of the Rangers net after Kyle Okposo took the initial shot. Zemgus Girgensons and Okposo were credited with the assists on the goal that made it 1-0 Buffalo. Kaapo Kakko was in the penalty box serving a holding penalty when the goal was scored.

The Rangers answered on their lone power play chance in the first period. Chris Krieder added to his team-best goal total with his 13th of the year with less than a minute to go in the frame. Jacob Bryson was called for the penalty that led to the goal. Artemi Panarin and Adam Fox each received assists on Kreider's score.

Krieder's goal sent the two teams to the intermission tied at 1-1.

Vinnie Hinostroza's second goal of the season came early in the second period to give Buffalo their second lead of the game, 2-1. Hinostroza created a turnover and beat Alexandar Georgiev with the shot less than three minutes into the frame. The goal was unassisted.

Jacob Trouba evened the score at 2-2 later in the middle stanza while a delayed penalty allowed New York to have an extra skater on the ice. Trouba's second goal of the season came on a rebound chance when Sabres goalie Aaron Dell could not hold onto the initial shot on goal. Panarin took the shot and was credited with an assist, along with Filip Chytil.

The Sabres thought that they had taken their third lead of the night, but the goal was disallowed by the officials as it was determined forward Cody Eakin made contact with Georgiev and interfered with the goaltender.

New York's first lead of the game came thanks to a Kakko goal midway through the period. Panarin recorded his third assist of the game, along with Ryan Strome being credited with his first of the contest. Kakko's goal gave the Rangers a 3-2 lead.

However, the Sabres scored twice in just 15 seconds to re-take the lead.

Tage Thompson scored his sixth goal of the season to even the game at 3-3 with a beautiful wrist shot through the legs of a Rangers defenseman.

Then the Sabres forward started the next chance in the offensive zone that resulted in Rasmus Dahlin's second goal of the season to give Buffalo a 4-3 advantage.

However, the Sabres' lead would be short-lived.

The third goal in less than a minute and a half resulted in another game-tying goal for the home team. This time, Rangers defenseman K'Andre Miller scored just 15 seconds after Dahlin's go-ahead score for his second goal of the season. It tied the game at 4-4 with a little more than six minutes to go in the period.

The only goal of the third period came with less than one second remaining in regulation.

Ryan Lindgren scored with 0.7 seconds to go in the game on the 13th New York shot of the period. His second goal of the season came after Mika Zibanejad was able to receive a pass from the corner. Zibanejad and Adam Fox were credited with the assists on the game-winning goal.

Buffalo had just four shots on goal in the third period, and finished the game with 22 total. Igor Shesterkin replaced Georgiev for the final frame and made four saves.

Second Period:
BUF : NONE
NYR : NONE

Third Period:
BUF : NONE
NYR : NONE

The blue and gold return home on Monday night for the second game of a stretch of five games in seven days. Buffalo welcomes the Columbus Blue Jackets for a 7 p.m. EST faceoff at KeyBank Center. Catch all of the action on the flagship home of the Sabres Radio Network - WGR Sports Radio 550. Pregame coverage with Mike Schopp and the Bulldog starts at 6 p.m. EST.

The Buffalo Sabres were no match for the Detroit Red Wings on Saturday night, as the Wings defended their home ice to the tune of a 4-0 shutout final.
NHL・8 HOURS AGO
WGR550

The Buffalo Sabres will be facing a surprising Nashville Predators team on Thursday night that leads the Central Division by three points over the Colorado Avalanche and St. Louis Blues. Paul Hamilton has his game preview:
NHL・2 DAYS AGO
Yardbarker

When the San Jose Sharks consider the most difficult tasks they faced this season, scoring goals against the New York Rangers will be at the top of the list. For the second time this year, the Rangers shut out the Sharks, this time by a tally of 3-0 at SAP Center on Jan. 13. San Jose played well most of the way and once again received solid goaltending. But as the saying goes, you can’t win if you can’t score, and it was another rough night for the offense against New York.
NHL・1 DAY AGO
WGR550

For the first time in nearly two calendar years, the Sabres and Predators played a game against each other. It was Jeff Skinner who stole the show on Thursday to help Buffalo end a six-game winless skid. Kyle Powell has a complete game recap:
NHL・2 DAYS AGO

Despite the return of captain Claude Giroux and Ivan Provorov from the COVID-19 list, the result was the same for the Philadelphia Flyers: another loss. The Flyers did play well in stretches but ultimately fell 3-2 on the road against the Boston Bruins on Thursday. Philadelphia will now look to...
NHL・1 DAY AGO
Buffalo News

Observations: Sabres 'bad all the way around,' fall apart in shutout loss

DETROIT – Late Saturday night, only 48 hours after outworking the Western Conference’s first-place Nashville Predators on the road, the Buffalo Sabres sat in the visitors’ dressing room wondering how everything went wrong on the ice at Little Caesars Arena. The Sabres mustered only 22 shots on...
NHL・9 HOURS AGO
NHL

Tonight the NHL will announce the teams for the NHL All-Star game next month in Vegas. It all gets started at 6:00 on ESPN with Rasmus Dahlin expected to be Buffalo’s participant. I think Tage Thompson has far and away been Buffalo’s best player.
NHL・2 DAYS AGO

The Sabres have been much better on the road lately than at home. Buffalo visits the Detroit on Saturday with points in five of their last six road games. Buffalo has won in some very difficult place beating Winnipeg, Minnesota and Nashville.
NHL・16 HOURS AGO
WGR550

The Buffalo Sabres are playing the Nashville Predators for the first time in nearly two calendar years. The last game, also at Bridgestone Arena in Nashville, Tennessee, went way of the Predators 2-1.
NHL・2 DAYS AGO
WGR550

Sabres' Rasmus Dahlin is an All-Star for the first time.

This was a total team win just like the loss to the Lightning was due to a lack of effort. This win was a very good recovery as the team came to play with a full effort. Buffalo stayed aggressive and never backed off to give Nashville hope.
NHL・2 DAYS AGO
WFMZ-TV Online

Making his weekly appearance on The Greg Hill Show, Mike Milbury weighed in on whether the Boston Bruins should at least consider trading Jeremy Swayman in the wake of Tuukka Rask’s return.
NHL・2 DAYS AGO
WEEI Sports Radio

The NHL Department of Player Safety announced that it has suspended Montreal Canadiens defenseman Chris Wideman one game for head-butting Boston Bruins forward Erik Haula.
NHL・2 DAYS AGO
97.1 The Ticket

Individually, Larkin has had a great season. His resurgence has been crucial for the Red Wings, who look to have a No. 1 center moving forward.
NHL・1 DAY AGO
WGN News

CHICAGO – This is been a bit of an unusual time for a man used to playing or preparing to play the game of hockey, forcing this ten-year veteran of the NHL to look for other things to occupy his time. That’s not a bad thing for Andrew Shaw. “I spend all my time with […]
NHL・2 DAYS AGO
105.3 The Fan

Spits and Suds: What the Stars should do with John Klingberg, road woes, and more

What should the Stars do with John Klingberg and is Miro ready to be the next guy? We also talk about the continued woes on the road and in the 3rd period.
NHL・2 DAYS AGO
97.1 The Ticket

Yzerman pleased with Wings' progress, but 'disappointed' in one area

The Wings are technically just one spot out of the playoffs. But the Bruins, team they’re chasing, has five more points and four games in hand.
NHL・2 DAYS AGO
CBS Boston

BOSTON (CBS) — A hockey player recording his first career NHL goal is a moment that is remembered forever. Bruins defenseman Urho Vaakanainen will be the rare player who gets to experience it twice. The 23-year-old scored what appeared to be the first goal of his NHL career on Wednesday night, sending a shot from the top of the right faceoff circle through the legs of teammate Curtis Lazar, off the blocker and back of Montreal netminder Sam Montembeault, and into the Canadiens’ net. The goal put the Bruins up 5-1 over their longtime rival, but it was a much more significant...
NHL・2 DAYS AGO