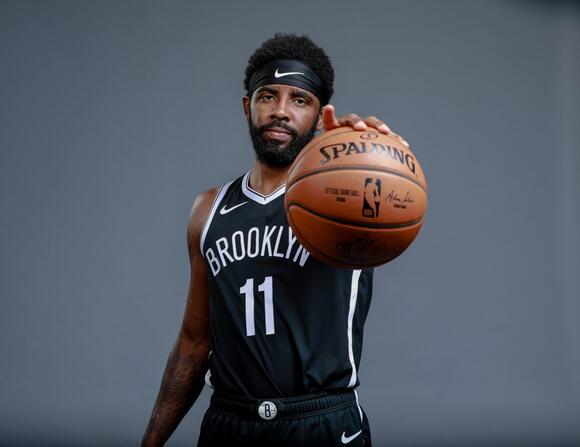 Kyrie Irving of the Brooklyn Nets tweeted out three photos on Sunday.

Kyrie Irving sent out three tweets on Sunday, and all three posts can be seen embedded below from his Twitter account.

Irving has yet to play in a game this season due to the vaccine mandate in New York City preventing him from playing at Barclays Center in Brooklyn, New York.

The All-Star guard could technically be a part-time player, but before the season began the Nets made their decision clear that Irving would not be with the team until he could be a full-time participant.

The Nets were meant to be a team with a big-three or Irving, James Harden and Kevin Durant with older veterans as depth.

Without Irving that is taking a massive part of their roster out of the fold, but even in his absence they are currently the first seed in the Eastern Conference with a 12-5 record in 17 games this season.

Kevin Durant injured his knee during the game between the New Orleans Pelicans and Brooklyn Nets.
NBA・1 DAY AGO
FastBreak on FanNation

Kevin Durant injured his knee during the game between the New Orleans Pelicans and Brooklyn Nets.
NBA・1 DAY AGO
FastBreak on FanNation

Kyrie Irving and the Brooklyn Nets lost to the Cleveland Cavaliers on Monday afternoon.
NBA・2 HOURS AGO
Footwear News

For the fourth time, Sneaker Room and NBA star Kyrie Irving have teamed up to create a “Mom” collection, but this time, the storytelling is a bit different. For the collection — which features new-look iterations of the Nike Kyrie 7 — Sneaker Room owner Suraj Kaufman and the baller told the story of their late mothers. The new wrinkle to the story, Sneaker Room said, is the want to honor all mothers with the kicks, including Mother Earth. For the two iterations of the Nike Kyrie 7 “Mom” in the collection, Sneaker Room and Irving highlighted nature’s four elements: land, fire, water...
DESIGNERS & COLLECTIONS・2 DAYS AGO
FastBreak on FanNation

James Harden of the Brooklyn Nets sent out a tweet on Sunday.
NBA・8 HOURS AGO
FastBreak on FanNation

Nets Injury Report Against The Pelicans

The Brooklyn Nets are hosting the New Orleans Pelicans on Saturday night at Barclays Center.
NBA・2 DAYS AGO

Rajon Rondo has been ruled out for Monday's game between the Brooklyn Nets and Cleveland Cavaliers.
NBA・21 HOURS AGO
Yardbarker

CLEVELAND -- Brooklyn Nets guard Kyrie Irving made clear Monday that his stance regarding the COVID-19 vaccine will not change in the wake of Kevin Durant's knee injury that is expected to sideline him for four to six weeks. Irving is unvaccinated and therefore ineligible to play at home because...
NBA・32 MINUTES AGO
FastBreak on FanNation

The Brooklyn Nets lost to the Cleveland Cavaliers on Monday afternoon in Ohio.
NBA・4 HOURS AGO

The Brooklyn Nets are in Ohio to take on the Cleveland Cavaliers on Monday afternoon.
NBA・12 HOURS AGO
FastBreak on FanNation

The Brooklyn Nets and Cleveland Cavaliers have announced their starting lineups for Monday's game.
NBA・6 HOURS AGO
ClutchPoints

Detroit Pistons legend Isiah Thomas recently speculated about what it would be like if star players from today’s NBA were inserted into the league in the 1980s and 1990s. Thomas explained that players like Los Angeles Lakers superstar LeBron James and Brooklyn Nets superstar Kevin Durant would pose massive issues for anyone hoping to stop them in that era.
NBA・2 DAYS AGO
fadeawayworld.net

The Los Angeles Lakers were a hot destination in free agency. Over the summer, multiple players flocked to the team to chase a title alongside LeBron James in the NBA's biggest market. But since the start of the season, things have been less than ideal for the Lakeshow. Through the...
NBA・1 DAY AGO
FastBreak on FanNation

The Golden State Warriors crushed the Chicago Bull in Illinois on Friday night, and after the game DeMar DeRozan spoke to the media.
NBA・2 DAYS AGO
FastBreak on FanNation

Steph Curry has been ruled out for Sunday's game between the Golden State Warriors and Minnesota Timberwolves.
NBA・2 DAYS AGO
fadeawayworld.net

Lamar Odom Takes A Shot At Tristan Thompson For Cheating On Khloe Kardashian: “Dude Is Corny For That, But It’s All Good"

Lamar Odom has given his two pennies on the Tristan Thompson-Khloe Kardashian recent controversy, attacking the Sacramento Kings big man for betraying the reality TV star once again. A couple of months after he stated he didn't get a personal trainer pregnant, the 2016 NBA champion revealed he is the...
NBA・2 DAYS AGO