Get the latest breaking news, sports, entertainment and obituaries in Sarasota, FL from Sarasota Herald-Tribune. 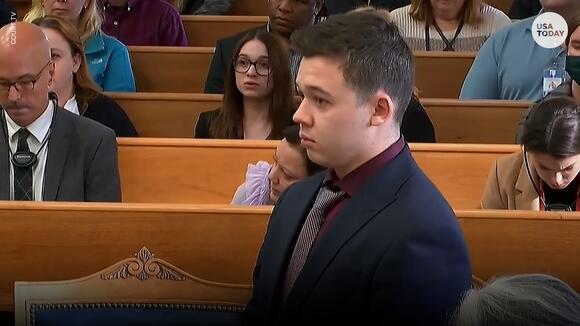 PLACIDA – Kyle Rittenhouse was spotted eating at a Placida restaurant, according to a tweet from Republican Party of Florida Chair of Chairs Evan Power. Rittenhouse recently spoke with FOX News host Tucker Carlson, for an interview that will be reportedly be broadcast Monday night.

The tweet by Power shows Rittenhouse sitting at Smokin’ Jerry’s Tiki Hut Bar & Grill on Gasparilla Road in Charlotte County, south of the coastal community of Englewood in Southwest Florida, with at least six other patrons.

Florida GOP Chairman Joe Gruters confirmed that Rittenhouse was in the area this weekend, for a segment for Carlson.

“I don’t know who he’s staying with, other than he's doing the Tucker Carlson Show,” Gruters said Sunday night.

“I always forget that Tucker Carlson has a place in Boca Grande so he’s probably getting ready for Thanksgiving and they probably have a little studio right there.”

Though Power tweeted the photo, it is not clear whether he captured the image.

Related: Kyle Rittenhouse not guilty on all counts of homicide, reckless endangerment

Rittenhouse was found not guilty Nov. 19 on five charges, including intentional homicide, more than a year after he shot three men during a protest in Kenosha, Wisconsin.

Rittenhouse shot three men – Joseph Rosenbaum and Anthony Huber, who died – and wounded Gaige Gosskreutz in the summer of 2020 during protests that followed the police shooting of Jacob Blake, a black man, in Kenosha.

Rittenhouse and his attorneys argued that he acted in self defense.

“I’m not a racist person,” he continued. “I support the BLM movement, I support peacefully demonstrating.”

Money buys freedom he had the best lawyers out there. He claims he's for BML and peaceful protest but he took an assault rifle with him????? Sounds like a white privilege spoiled little boy. He's 19 and carrying an assault rifle that means you're going to war!

Well, to me watching the trial sounded like Kyle invoked his 2nd Amendment right. I applaud him for his actions. The “WOKES” are being as stupid as ever.. they don’t lead, they follow. They are pathetic. Starting with the first idiot who called him a “white supremicist” who I believe is in charge of running the country until the next election. I wonder if that guy ever cried white man tears? God help us all!

someone needs to shut joy reid up. She is the racist. Never tells the truth. to Call all white people white supremicsts is race baiting.

Democrats are heading toward defeat on their push to change the filibuster and pass voting rights, the latest setback for President Biden and his party’s agenda. Senate Majority Leader Charles Schumer (D-N.Y.) is pushing forward with his vow to force a vote as soon as Wednesday on a sweeping voting bill, which Republicans are expected to block. After that, Democrats are expected to force a vote on changing the filibuster, which requires 60 votes for most bills to advance.
CONGRESS & COURTS・3 HOURS AGO
The Associated Press

(CNN) — The new government website where people can order free Covid-19 at-home rapid antigen tests is up and running. With just names and addresses, families can go to COVIDtests.gov and request up to four free tests to be delivered to their homes. The website comes online as the...
POTUS・3 HOURS AGO
ABC News

WASHINGTON — The Biden administration will make 400 million N95 masks available for free at thousands of locations across the country, a White House official said Wednesday, as health experts stress the importance of high-quality face coverings to protect against the omicron variant of the coronavirus. The plan consists...
POTUS・4 HOURS AGO
The Associated Press

SYDNEY (AP) — Three of Tonga’s smaller islands suffered serious damage from tsunami waves, officials and the Red Cross said Wednesday, as a wider picture begins to emerge of the destruction caused by the eruption of an undersea volcano near the Pacific archipelago nation. Communications have been down...
ENVIRONMENT・2 HOURS AGO

Microsoft buys game maker Activision Blizzard for about $70B

Microsoft is paying the enormous sum of nearly $70 billion for Activision Blizzard, the maker of Candy Crush and Call of Duty, a deal that would immediately make it a larger video-game company than Nintendo while raising questions about the deal’s possible anti-competitive effects. The all-cash $68.7 billion deal...
BUSINESS・19 HOURS AGO
ABC News

A showdown between the nation’s major airlines, the FAA and AT&T and Verizon appears to be cooling after both companies agreed to pause a portion of its 5G-C rollout.
ECONOMY・10 HOURS AGO

Get the latest breaking news, sports, entertainment and obituaries in Sarasota, FL from Sarasota Herald-Tribune.