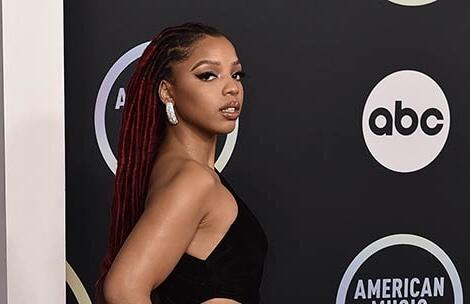 You can always depend on Chloe Bailey to bring the heat to a red carpet.

The “Have Mercy” singer arrived tonight at the 2021 American Music Awards wearing a black velvet gown complete with cutouts and a thigh-high slit by Monsoori.

Bailey’s Monsoori dress was fitting for the occasion as she has been making a name for herself in the industry and fashion world. Since going solo, she has been experimenting with new silhouettes, designers and colorful locs.

She tied her look together with a pair of black Jimmy Choo Romy pumps that featured a stiletto heel and diamond chains on the ankle. The Grammy Award winner accessorized her look with diamonds. She wore a pair of diamond cuff earrings, bracelets and rings. She also debuted a new hair color. The 23-year-old swapped out her usual blond locs for a fiery scarlet hue.

Bailey rose to prominence in 2012 as one half of the R&B sibling duo, ChloexHalle with her sister, Halle. Bailey is set to make her AMAs debut by performing her hit single “Have Mercy,” which debuted in September. Tyler the Creator, Olivia Rodrigo, Cold Play, BTS and Bad Bunny will also take the stage.

The American Music Awards honor both established and independent musicians, as well as those who have broken records during the year. This year’s event, hosted by Cardi B, will take place at the Microsoft Theater in Los Angeles, California. Olivia Rodrigo has the most nominations of the evening with seven, followed by artists including The Weeknd, Doja Cat, Giveon and Bad Bunny. Unlike past ceremonies, several awards have already been announced on TikTok for Ed Sheeran, Lil Nas X and Taylor Swift.

See more stars on the red carpet at the American Music Awards .

Chloe Bailey is super edgy in her latest look. The “Do It” singer posted a photoset on Instagram yesterday that showed the musician wearing a chic outfit. For the ensemble, Bailey donned a black turtleneck ankle-length dress that featured a thigh-high slit. She accessorized the piece with a pair of big black sunglasses, gold dangling earrings and an assortment of silver rings. View this post on Instagram A post shared by Chlöe (@chloebailey) When it came down to the shoes, Bailey popped on a pair of black sandals that grounded and further elevated her outfit. The heels incorporated a strap across the...
BEAUTY & FASHION・14 DAYS AGO
Footwear News

Jennifer Coolidge took a classic approach to her late-night talk show appearance. The actress was on “The Tonight Show Starring Jimmy Fallon” on Thursday to discuss her role on HBO’s “White Lotus” and how she got involved with Ariana Grande’s music video for “Thank You Next.” On the show, Coolidge wore a chic, traditional look consisting of a black lace mini dress from Dolce & Gabbana. The dress featured long sleeves and a scoop neckline. She added oversized gold hoop earrings as well as a few gold rings to the outfit. Her blond locks were worn in polished waves, adding to...
BEAUTY & FASHION・1 DAY AGO
Footwear News

Dakota Johnson went all-red for an appearance on “The Late Late Show with James Corden.” The “Lost Daughter” star sat down with the British comedian and actor Josh Gad, wearing a red Magda Butrym dress. The long-sleeved style featured a miniature polka dot print, as well as a sleek ruched skirt and plunging neckline. The bold piece also included three 3D flower accents on its front, adding a garden-worthy spin to Johnson’s look. For footwear, the “Ben and Kate” star wore a pair of sharp Manolo Blahnik pumps. The $665 BB style featured a pointed-toe silhouette with 4.1-inch stiletto heels for a sleek twist....
BEAUTY & FASHION・2 DAYS AGO
hotnewhiphop.com

Chloe Bailey is dishing on her love life. Earlier this week, the 23-year-old "Do It" singer hopped onto Instagram to host a live stream, during which plenty of her fans dropped off questions about who she is – or isn't – dating. In a clip uploaded to The...
CELEBRITIES・5 DAYS AGO

Christie Brinkley, 67, shared a new Instagram photo wearing a sparkly silver dress on New Year’s Eve. In the caption, the model opened up about her goals for 2022 in the form of a poem, and they included staying active with swimming and dancing. Brinkley previously shared that she...
CELEBRITIES・14 DAYS AGO
uticaphoenix.net

Chloe Bailey recently downplayed rumors that she and rapper Gunna are dating. Bailey was responding to fan questions on Instagram Live on Sunday when a few people asked her whether the pair were dating. The rumors started in late October when Bailey and Gunna were seen together at an Atlanta...
CELEBRITIES・3 DAYS AGO
iHeartRadio

Chloe Bailey Slams Critics Who Compare Her To Sister Halle

Chloe Bailey must have Barbie on speed dial, because her latest outfit looks straight out of the Dreamhouse's walk-in closet. Equipped with a $3,900 Louis Vuitton purse, the "Have Mercy" singer stepped onto the court ahead of a Lakers game on Jan. 19 to snap a few photos of her bubblegum pink look. Posing in a white crop top and pink Miu Miu track pants, Bailey showed off a chic bomber jacket complete with the Miu Miu logo embroidered on the front. "Life is goooood 🏀💕," she captioned the photo of her look.
BEAUTY & FASHION・2 DAYS AGO

Gunna and Chloe Bailey may be just friends (for now), but that doesn't mean that the 28-year-old DS4EVER rapper wants to see his "you & me" collaborator settle down with anyone else. During a recent sit down on The Breakfast Club, the Georgia-born "drip influencer" told Charlamagne Tha God, EJ Envy and Angela Yee that he feels as though he's "becoming ready" to settle down into a serious relationship.
CELEBRITIES・7 DAYS AGO
shefinds

Katy Perry proved she really is a “firework” in a fiery hot, skin-tight outfit worn during “Play,” her current Las Vegas residency. The singer donned a red crop top and latex skirt combo (one of our fave looks from her residency so far!) and shared a collection of post-show pics in a January 2nd Instagram post. The iconic ensemble can be seen in her eighth photo.
CELEBRITIES・10 DAYS AGO
hotnewhiphop.com

Chloe Bailey's Instagram feed is on fire. On Thursday, January 20th, the 23-year-old "Do It" singer dropped off yet another steamy selfie, seemingly co-signing her "good friend" Gunna's new song "Pushin P." The upload sees the Atlanta-born vocalist sitting in a very bright, white room, crouched on the bed, and...
MUSIC・1 DAY AGO
defpen

Chloe Bailey Provides An Update On Her Debut Solo Album

Just before Thanksgiving, Chlöe Bailey took to Twitter to share a snippet of a new track called “Light Flex.” Differing from her previous releases, Bailey can be heard nearly rapping as she offers a little bit of a humble brag about how dope she is in real life.
THEATER & DANCE・1 DAY AGO

Moneybagg Yo Shows Off New Diamond-Encrusted Teeth That Cost $200K

Moneybagg Yo is living up to his stage name after the Memphis rapper revealed that he dropped $200,000 on new diamonds that are embedded into his teeth. The “Wockesha” rapper took to Instagram to share his latest mouth jewelry, showing diamonds on the bottom and front row of his teeth.
CELEBRITIES・3 DAYS AGO
iheart.com

DJ Clue sat down in the studio with Gunna to discuss his new 'Drip Season 4' project which is out now and while in the studio Gunna also got into how he linked with rumored bae, Chloe Bailey, the Freddie Gibbs beef and that infamous plane incident. Check out the...
CELEBRITIES・8 DAYS AGO
Variety

Dave, Doja Cat, Ed Sheeran, Holly Humberstone, Liam Gallagher and Little Simz are among the first wave of performers revealed for this year’s Brit awards, one of Britain’s biggest music events. The awards, which are scheduled to take place live at London’s O2 Arena on Feb. 8, will be broadcast on ITV and ITV Hub, and streamed for non-U.K. viewers via the Brits’ YouTube channel. Despite a dip in numbers and the U.K. government’s decision to ease restrictions, the country continues to register more than 100,000 new COVID-19 cases and upward of 330 deaths daily as omicron spreads. To ensure...
CELEBRITIES・2 DAYS AGO
The Independent

A woman has thanked one of her fellow gym members for not staring at her as she does squats, and she is sparking a debate on social media for doing so.In a TikTok video posted on 1 January, @libbychristensen was squatting on an exercise machine, as a man was sitting on a bench behind her. @libbychristensen ty for your service kind sir #gymtok #girlwholift #YerAWizard ♬ The Golden Girls - The Main Title Theme - TV Themes “I just need to shout out this man who was behind me while it was hack squatting bc I...
WORKOUTS・3 DAYS AGO

Following the news of their shocking split, fans are wondering why Jason Momoa and Lisa Bonet broke up after 16 years together. While the former couple didn’t personally divulge many details about the reason behind their split, it seems Bonet may have been dropping some subtle hints about the decision in an interview published just weeks before their announcement. Bonet—who secretly tied the knot with Momoa in 2017 after more than a decade together—shares daughter Lola and  son Nakoa-Wolf with the Aquaman star. The former couple announced their split in January 2022. In an Interview magazine feature published exactly a month...
CELEBRITIES・4 DAYS AGO
goodhousekeeping.com

Lisa Bonet will turn 54-years-old this year and yet she somehow looks the same age as her 32-year-old daughter, Zoë. The actress who got famous for her role as Denise Huxtable on “The Cosby Show” and “A Different World," she most recently starred in the TV series "Ray Donovan" as Marisol Campos. You likely also know her because of her relationship to Lenny Kravitz, Zoë's dad. But enough about that, back to her ageless complexion.
CELEBRITIES・25 DAYS AGO
BET

Ashley Graham Gives Birth To Twin Boys: 'They Were Born Early This Morning At Home'

Ashley Graham and her husband Justin Ervin just welcomed their twin sons at home! On Friday (Jan. 7), the model shared the baby news via her social media. Read the announcement, below!. “Justin and I are so excited that our baby boys are here. They were born early this morning...
CELEBRITIES・15 DAYS AGO
StyleCaster

Cause for celebration! The celebrity babies of 2022 include kids born with parents like Ashley Graham, Michelle Kwan and other stars. The celebrity babies of 2022 come after a year of births in 2021, which saw stars like Scarlett Johansson, Cardi B, Halsey, Meghan Markle and more famous names welcome children. The Duchess of Sussex and her husband, Prince Harry, announced in a statement in June 2021 that they had welcomed their second child, a baby daughter named Lilibet Diana Mountbatten Windsor. “It is with great joy that Prince Harry and Meghan, The Duke and Duchess of Sussex, welcome their daughter,...
CELEBRITIES・1 DAY AGO