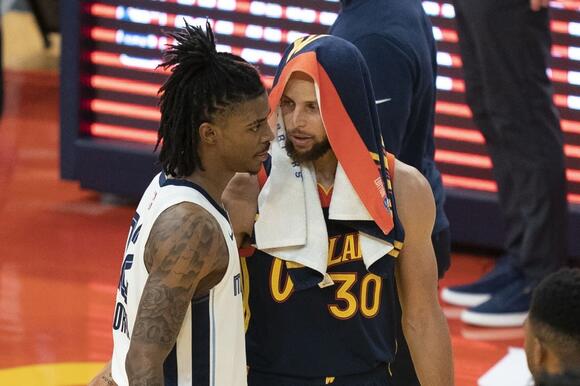 Steph Curry will play for the Golden State Warriors on Sunday night against the Toronto Raptors.

The Golden State Warriors are hosting the Toronto Raptors at Chase Center in San Francisco, California on Sunday night.

Coming into the game, the Warriors have a 14-2 record in their first 16 games, which is not only good enough for the first seed in the Western Conference, but is the best record out of all 30 NBA teams in the league.

After missing Friday's win over the Detroit Pistons with a hip injury, two-time MVP Steph Curry will play in Sunday's game against the Raptors.

The way he is playing could easily lead him to his third MVP Award.

The Raptors come into the game with an 8-9 record.

More on the Toronto Raptors can be read here.

The Golden State Warriors lost to the Indiana Pacers at home on Thursday night, and after the game Steph Curry spoke to the media.
NBA・1 DAY AGO
95.7 The Game

Warriors coach Steve Kerr took the blame for his team’s 121-117 overtime loss to the Indiana Pacers, who were without four of their top five scorers.
NBA・1 DAY AGO
USA TODAY Sports Media Group

Perennial All-Star and MVP candidate Steph Curry hit the first buzzer-beater of his storied NBA career on Friday night, lifting the host Warriors to a 105-103 victory (box score) over the visiting Rockets. Curry shot just 6-of-21 (28.6%), but he finished with 22 points and 12 assists and came through...
NBA・1 DAY AGO

First-place Phoenix travels to take on a surging Dallas team and Indiana draws Golden State on the second night of a back-to-back.
NBA・2 DAYS AGO
FOX59

SAN FRANCISCO (AP) — The Golden State Warriors were frenzied, rushing shots and being careless with the basketball. It led to perhaps their worst loss this season to an Indiana team with a handful of injured stars watching in street clothes. Keifer Sykes hit a go-ahead 3-pointer with 1:41 left in overtime and a layup […]
NBA・1 DAY AGO
AllClippers

Steph Curry on Game-Winning Shot: 'About Time I Made One'

The Golden State Warriors avoided what would have been two consecutive bad losses, avenging their loss to the Indiana Pacers with a win over the Houston Rockets. Steph Curry struggled with his shot again in this game, but when it mattered most, he came through. With 5.1 seconds on the clock, and the game tied, Curry hit a step-back jumper at the buzzer for the win. It was his first career game-winning buzzer beater, and he was excited about it after the game.
NBA・1 DAY AGO
NBC Bay Area

SAN FRANCISCO -- The 16-win Indiana Pacers were too much for the Warriors on Thursday night. One night later, it looked like the same would be true for the 14-win Houston Rockets. Surprise, surprise, the team that had Steph Curry won. This time, at the buzzer. Curry's 22-foot step-back jumper...
NBA・1 DAY AGO

‘It’s about time I made one’: Steph Curry hits first career buzzer-beater to lift Warriors to win

Steph Curry has achieved a lot in his NBA career: multiple league titles, two-time Most Valuable Player awards and numerous All-Star nominations. But surprisingly, in his illustrious career, Curry has never hit a buzzer-beater to win a game as time expired. Per ESPN, he has hit seven shots to win games in the final 5 seconds.
NBA・1 DAY AGO
East Bay Times

Stephen Curry has hit all sorts of shots in his 13 seasons with the Warriors, but he unlocked a new one Friday night. Tied at 103 with 5.3 seconds left in regulation, Curry got the ball. He dribbled left, pulled up and elevated over a Houston defender. Forget the fact that he couldn’t seem to buy a basket on credit for most of the night. Forget the fact that he had dead legs from the prior night’s overtime loss.
NBA・16 HOURS AGO
NBC Bay Area

SAN FRANCISCO -- The Warriors played down to their competition Thursday night at Chase Center, lacked energy and went ice-cold from behind the 3-point line. In the end, they got exactly what they deserved. Steph Curry's 39 points weren't enough as the Warriors lost 121-117 in overtime to a now...
NBA・2 DAYS AGO
knbr.com

Stephen Curry’s night was going so poorly, he kicked over a chair on the Warriors bench in frustration. The two-time MVP missed nine of his first 10 shots. With 5.1 seconds left and the game tied at 103, he was 5-for-20 and 3-for-13 from behind the arc. But the...
NBA・1 DAY AGO

Coming off an upset loss from the short-handed Indiana Pacers in overtime at home on Thursday, the young Houston Rockets gave the Golden State Warriors everything they could handle on Friday night. However, the ending was different on the second leg of Golden State’s back-to-back. After a rough start...
NBA・1 DAY AGO
San Francisco Examiner

Warriors week: If Steph Curry doesn’t win the MVP, who will?

In terms of story lines surrounding the Warriors this week, injuries, recovery and potential remain the main threads. Draymond Green’s injury will continue to be a major issue. Klay Thompson is slowly working his way back to his old self. We’re all holding our breath for the return of James Wiseman. And Jonathan Kuminga might be the most tantalizing Warrior rookie since Anthony Randolph.
NBA・16 HOURS AGO
Sportsnaut

The trade deadline is just around the corner in the NBA world. There's no doubt a lot of teams will be looking to add players or shake up their roster. Multi-team trades are more commonplace in the modern NBA, and it is possible that we see some blockbuster trades ahead or at the deadline.
NBA・2 DAYS AGO
ClutchPoints

The NBA has announced that Kyrie Irving has been fined $25,000 for an interaction with a fan during the Brooklyn Nets loss to the Cleveland Cavaliers on Monday.
NBA・2 DAYS AGO