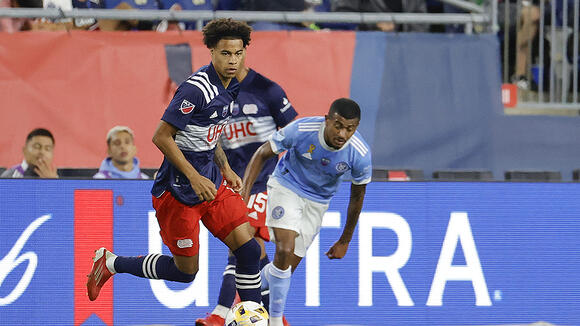 FOXBORO (CBS) — The Revolution still have to wait over a week to play their first playoff match. But at least they now know who they’ll host in the Eastern Conference Semis.

That will be New York City FC, which beat Atlanta United FC in the First Round on Sunday. The Revs will host NYCFC on Tuesday, Nov. 30 at 7:30pm at Gillette Stadium.

New York City was the four-seed in the East after going 14-11-9 during the regular season. They lost just one match in October and November, winning three while playing to a pair of draws over the final month.

New England and New York City met three times during the regular season, with the Revs taking two of those three matches. Tommy McNamara led New England to a thrilling 3-2 win at Red Bull Stadium in June, breaking a 2-2 tie with an 88th minute tally. Gustavo Bou and Tajon Buchanan also scored for New England in the victory.

The Revs got revenge a few weeks later with a 2-1 victory at Gillette, with Buchanan netting the game-winner in the 65th minute.

“They’re a great side. They play esthetically, like really nice looking soccer,” Turner said of NYCFC to WBZ-TV’s Dan Roche on Sunday. “But we’ve been able to take two games from them this year and hopefully we can do that again. They have the Golden Boot winner at top in Taty Castellanos, a good goalkeeper in Sean Johnson and guys in the midfield that can really make the game tick.

“It’s important that we take care of the ball and defend well as a group because they create a lot of chances throughout games,” added Turner. “Hopefully we keep the ball out of the net and I’m confident that our guys up top will get one or two to get us the win and we’ll move on.”

New England owns home-field advantage throughout the playoffs after winning the franchise’s first Supporters’ Shield, setting a new regular season record with 73 points. The club last played on Nov. 7 when it closed the regular season with a 1-0 loss to Miami in Foxboro.

Get ready for New England’s first postseason match with a special pregame show on TV38 at 6:30pm on Nov. 30!

Wilson will open its second store at 594 Broadway in the SOHO district of Manhattan. Its first store opened last July in Chicago. The 6,400-square-foot flagship location in New York City, which opens January 21, features an atrium space named the Thomas E. Wilson Indoor Park in honor of the brand’s founder. In the space, customers shoot hoops, test racquets by hitting balls against an indoor wall, or other equipment, intended to encourage play.
NEW YORK CITY, NY・8 DAYS AGO
CBS Boston

BOSTON (CBS) — As is usually the case in the weeks that follow a team’s season coming to an end, we’re finding out about Patriots players who played through an injury during the 2021 campaign. Center David Andrews was one of them, and had to go under the knife because of his injury. Andrews underwent shoulder surgery on Wednesday, which he revealed on his Instagram account with a picture of himself and his young son, James. The picture was captioned “Surgery Shmurgery — it’s still daddy daycare szn.” Isn’t it always, David? Patriots center David Andrews spent a good portion of the season...
NFL・2 DAYS AGO
CBS Boston

BOSTON (CBS) — It looks like Matt Turner will make his move from New England to London this summer. The goalkeeper and the Revolution have reportedly agreed to terms for Turner to transfer to Arsenal of the Premier League. That comes according to former Revolution star and soccer analyst Taylor Twellman, who tweeted about the agreement Thursday afternoon. Twellman added that documents still need to be filed for the transfer to become official, so the details of the transfer remain unknown. ESPN is reporting that Turner’s transfer is $6 million up front, which could increase to as much as $10 million with...
PREMIER LEAGUE・1 DAY AGO
Sportsnaut

The Columbus Crew acquired James Igbekeme from Spain’s Real Zaragoza for the 2022 season. The 26-year-old Nigerian midfielder will occupy
MLS・2 DAYS AGO

FOXBORO (CBS) — When the US Men’s National team kicks off a three-game stretch of World Cup Qualifiers on Thursday night, Revolution goalkeeper Matt Turner will likely be the one in net trying to shut out El Salvador. With Zack Steffen sidelined with a back injury, USMNT head coach Gregg Berhalter confirmed Wednesday that Turner is expected to start in net for the club’s upcoming qualifiers. Tuner started the first five qualifiers of the current “Octagonal” campaign, going 2-2-1 with a pair of clean sheets, with Steffen starting the last three matches. Turner had 13 caps with the USMNT in 2021, going...
MLS・1 DAY AGO
CBS Boston

BOSTON (CBS) — Matt Turner didn’t have to make a save in the USMNT’s 1-0 win over El Salvador in Thursday night’s World Cup qualifier. But the goalkeeper earned plenty of praise from head coach Gregg Berhalter, who confirmed that Turner will soon be transferring to Arsenal. It was reported Thursday afternoon that Turner and the New England Revolution had agreed to terms with Arsenal on the keeper’s transfer to the Premier League. Turner won’t be making his way across the pond until the summer transfer window, so he’ll be able to fulfill his USMNT duties and start the season with...
PREMIER LEAGUE・15 HOURS AGO
Sportsnaut

Charlotte FC signed Polish striker Karol Swiderski as the first designated player in club history. The contract announced by the
MLS・2 DAYS AGO

LOS ANGELES (KPIX) — Many 49ers fans are heading to Los Angeles for the NFC Championship game against the Rams, but not all the fans wearing red and gold in the stands will be from the Bay Area. The number of home-grown LA area 49ers fans is exploding. “I wore my jersey to work today and my friend said, ‘You’re a 49ers fan?’ And I said, ‘Yep. What’s up?!'” said Annette, a 49ers fan and Los Angeles resident. KPIX connected with several members of the Saloon Squad, a Los Angeles-based 49ers booster club, as they prepare to root against the Rams. Many of the...
NFL・2 DAYS AGO