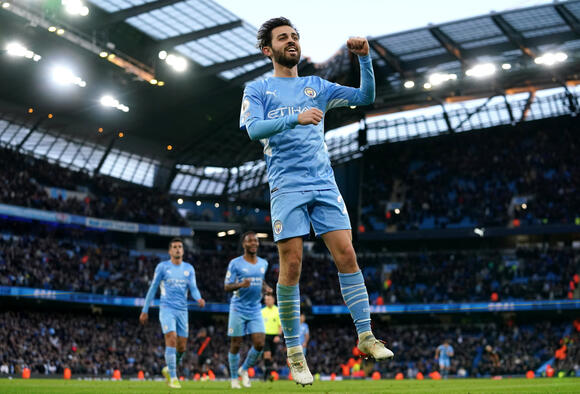 Last summer, Pep Guardiola had publicly revealed that Bernardo Silva was one of a handful of Manchester City players who had expressed a wish to leave the club due to a variety of reasons including an unhappiness with life in the North-West city.

A move, however, failed to materialise, in spite of links to clubs such as Atletico Madrid in Spain and AC Milan in Italy.

That meant the Portugal international would spend the 2021/22 season with Manchester City, with an uncertain long-term future.

Yet, the off-the-pitch issues have failed to impact on Bernardo's performances on the pitch, as the midfielder has started the season in remarkable form, winning Manchester City's player of the month for September and October.

After scoring in his side's 3-0 victory against Everton at the Etihad Stadium on Sunday afternoon, Bernardo Silva took his tally to four goals and one assist in the Premier League this season.

Speaking prior to the Everton match, Pep Guardiola heaped praise on Bernardo Silva stating, "Now, he is undroppable because of what he does on the pitch."

"Sometimes he didn't play because he wasn't undroppable; he was not at the level. The year we got 98 points and won the league, he was the best [player]".

“It’s difficult to find a player like him in the world right now. But the season is long and the tiredness is coming. Normally it happens because he is strong and a huge competitor and he is a lovely guy."

Pep Guardiola then dropped a hint about the future of the Portuguese star, saying that he believed Bernardo Silva is in fact happy in Manchester - which contrasted with the player's feelings last summer when he wished to leave.

The Catalan said, “He is funny, beloved and happy here. I have the feeling he is happy here with his personal life and I hope he can have an exceptional season with us again."

“He can play six positions - holding midfielder, attacking midfielder, (left) winger, striker, false nine, the other winger - and can play everywhere. He is so smart, so intuitive, so intelligent."

“He's a player who knows exactly what is going on every single action of the game and the right decision has been made. He does it.

"That's why he is a player like he has done. He has played the games he played at Anfield, Stamford Bridge, Old Trafford, Brighton - one of the toughest games of the season is Brighton away - and Leicester.

“Always he played at a level that is: ‘Wow’. Hopefully he can be fit, hungry and competitive to continue to give us what he is doing.”

Julian Alvarez’s potential arrival at the Etihad Stadium could prove to be a massive coup for Manchester City, as the Premier League champions' search for a solution in the striker position continues. The Argentine forward, often compared to the recently retired Manchester City legend Sergio Aguero, has been one...
PREMIER LEAGUE・2 DAYS AGO
CityXtra

On current form, Joao Cancelo has been the outstanding left-back in Europe this season. The Portuguese international has never seemed out of place on the left side of defence, despite naturally operating on the opposite flank, and his remarkable displays have made him one of Manchester City’s stand-out players in the current campaign.
PREMIER LEAGUE・15 HOURS AGO
CityXtra

A flurry of reports over the past week have seen Argentina international Julian Alvarez be heavily linked with sealing a move to Manchester City ahead of the transfer deadline on January 31st before being loaned back to River Plate for the remainder of the campaign. While Alvarez's comparisons to former...
PREMIER LEAGUE・1 DAY AGO

When Will Manchester City Announce the Signing of River Plate Forward Julian Alvarez?

On Tuesday evening, it was confirmed by transfer expert Fabrizio Romano that Julian Alvarez to Manchester City was a done deal, with the Premier League champions paying an initial €18.5 million fee, with bonuses and taxes added. However, the 21-year old is to remain at River Plate until the...
PREMIER LEAGUE・2 DAYS AGO
CityXtra

Morgan Rogers has had a rough time of things during his loan spell at Bournemouth. Making a single start in 15 Championship games, it is safe to say that the move has failed to work out so far for the 19-year-old. After showing encouraging signs during his loan stint at...
SOCCER・6 HOURS AGO
CityXtra

A comprehensive round-up of all the latest Manchester City transfer news and gossip from across the globe, as we enter the final week of the January transfer window. Swansea, QPR, and Rangers have all made approaches to sign James McAtee on loan, with the Manchester City midfielder in demand among a host of clubs eager to secure his services for the remainder of the season. (James Ducker/Telegraph)
PREMIER LEAGUE・3 HOURS AGO

Manchester City’s title win in the 2011/12 season is regarded as one of, if not the most iconic title win in Premier League history. The Sky Blues' league triumph on goal difference with their fate alongside cross-town rivals Manchester United’s being decided on the final day is already an incredible story - surely the most dramatic end to a Premier League title race ever.
PREMIER LEAGUE・6 HOURS AGO
CityXtra

Over the course of the past few years, Manchester City and the City Football Academy as a whole have firmly solidified a reputation for having a keen eye for spotting quality youth talent from both the local region and all corners of the globe. Nurturing the potential of Phil Foden...
SOCCER・2 DAYS AGO
CityXtra

Ever since the Abu Dhabi Group's takeover of Manchester City in 2008, the ultimate goal has been to lift the Champions League trophy. By appointing Ferran Soriano and Txiki Begiristain, the hierarchy put everything in place to ensure the appointment of Pep Guardiola as manager - one of the sports' serial winners.
UEFA・5 HOURS AGO

Pep Guardiola’s trophy-laden spell at Manchester City has ensured that he is right up there amongst the greatest managers in Premier League history, having won a plethora of domestic trophies since his arrival to the Etihad Stadium in 2016. There is an argument to suggest that the Catalan's Manchester...
PREMIER LEAGUE・1 DAY AGO
CityXtra

There is no denying the fact that James McAtee is right among the best English talent pool of up-and-coming young players after emerging through the academy ranks at the Etihad Stadium into the first-team squad. With 14 goals and four assists to his name in 17 Premier League 2 appearances...
PREMIER LEAGUE・7 HOURS AGO
CityXtra

James McAtee is the cream of the crop from a prodigious group of youngsters that have come up through the ranks at the brilliant Manchester City academy across the past few months. Pep Guardiola is certainly not a manager who hands out freebies in the form of first-team appearances, and...
PREMIER LEAGUE・8 HOURS AGO
CityXtra

The Manchester City defender was dismissed with eight minutes remaining in the club's 2-1 defeat to RB Leipzig in Germany, on matchday six of their Champions League group stage campaign in December. Speaking during a recent interview on the subject of his dismissal against the Bundesliga side, Kyle Walker said,...
UEFA・7 HOURS AGO
CityXtra

Ever since Luka Ilic signed for Manchester City, the youngster has been identified as one to watch for the future, and tipped to emulate the success seen within the game from his brother in Serie A. However, the Serbian midfielder's career up until now has been defined by a series...
PREMIER LEAGUE・2 DAYS AGO
Insider

FIFA president Gianni Infantino argued that the World Cup should be held biennially, instead of every four years, which has been the norm since 1950.
FIFA・1 DAY AGO