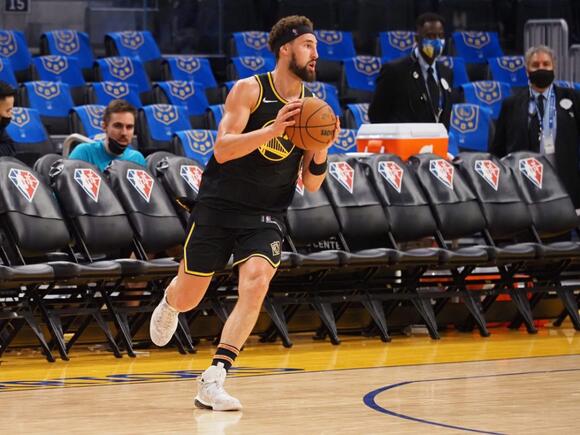 The Athletic reported Sunday that guard Klay Thompson, who hasn’t played since June 2019 due to injuries, should be ready to return to the active roster in the week before Christmas.

He took part in 5-on-5 scrimmages over the past week and now is cleared to take part in practices with the Warriors, per the report. They will be the first full-contact scrimmages for Thompson since he tore an anterior cruciate ligament during the NBA Finals against the Toronto Raptors more than two years ago.

In November 2020, he sustained a torn Achilles tendon during an individual workout before the start of the pandemic delayed 2020-21 season. 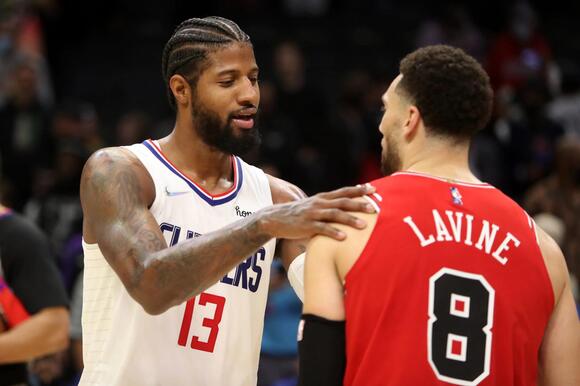 Thompson’s return will be a bonus to the Warriors, who already have the NBA’s best record (14-2) .

Jannelle Moore on the Warriors: The change in Klay Thompson’s game

If you let the five-time NBA All-Star tell it, he has the handles and the touch around the rim to go along with his range, his ability to get hot from three within a minute, and his defense. Seeing Thompson slash through the paint, and soar above Cleveland Cavalier defenders for an emphatic dunk in his season debut on Jan. 9 and his newfound penchant to drive to the basket is a surprise to everyone but him.
NBA・2 DAYS AGO
Mercury News

SAN FRANCISCO — Hours before tipoff Sunday, Warriors coach Steve Kerr learned that Klay Thompson wouldn’t be available against the Utah Jazz, raising concern over his recovery from two leg injuries and leaving Golden State shorthanded again against one of its top foes in the Western Conference. Thompson...
NBA・2 DAYS AGO
San Francisco Chronicle

Klay Thompson hit the most recent speed bump of his comeback Sunday. Six games into his return to the NBA after 2 ½ years recovering from a torn ACL and torn Achilles tendon, Thompson was a late scratch from the Warriors’ game against Utah. Head coach Steve Kerr said Thompson has “a little soreness” in his surgically repaired left knee.
NBA・2 DAYS AGO
NESN

Golden State Warriors guard Klay Thompson (knee) will play in Tuesday’s matchup against the Dallas Mavericks, per The Athletic’s Anthony Slater. After a brief one-game absence due to left knee soreness, there was some question on Thompson’s status heading into Tuesday but he will be in the starting lineup as also reported by Slater. Although the soreness is in the same knee that had the torn ACL suffered in 2019, head coach Steve Kerr assured reporters during his time out that it was nothing serious. His minutes restriction will be something to monitor against the Mavericks as the team has only allowed him 21.3 minutes per game in the six games since his return.
NBA・10 HOURS AGO

Anthony Slater: Klay Thompson will play tonight. Klay Thompson on what impressed him about Jordan Poole:. “When you see a player care that much and you see him care about his performance, that’s what really impresses me and I’m not surprised by his growth because he’s an extremely hard worker and he’s only gonna get better.” – 1:39 AM.
NBA・10 HOURS AGO
ClutchPoints

The Phoenix Suns are steamrolling the NBA once again. They became the first team to win 30 games this season due to their elite offense and even better defense. It’s not a matter of if, but who on Phoenix’s roster gets named an All-Star. Devin Booker has been...
PHOENIX, AZ・18 DAYS AGO
Sportsnaut

The 2021-’22 NBA season is proving to be a massive disappointment for the Los Angeles Lakers. Between the Anthony Davis
NBA・22 HOURS AGO
fadeawayworld.net

Russell Westbrook has been underwhelming since he joined the Los Angeles Lakers before the start of this season. The former MVP has received a lot of the blame for the Lakers underperforming, with fans and analysts naming his inefficient play and careless turnovers for the Lakers' struggles. Considering all of that, there have been rumors that the Lakers are already willing to trade Westbrook.
NBA・1 DAY AGO

Charles Barkley and Michael Jordan were very close during their playing careers. Jordan and Barkley entered the NBA at the same time, as part of the legendary 1984 NBA Draft class. Jordan went to the Bulls, and Chuck would join the Philadelphia 76ers. But Barkley found more success when he was in the Western Conference.
NBA・2 DAYS AGO
Lakers Daily

Los Angeles Lakers legend Kareem Abdul-Jabbar ripped fellow Hall of Famer John Stockton for his comments on the COVID-19 pandemic. Stockton wrongly claimed that 150 athletes have died from taking the COVID-19 vaccine, and Abdul-Jabbar responded in an interview with CNN’s John Berman. “I think statements like that make...
NBA・1 DAY AGO
Sportsnaut

Patrick Beverley has been ruled out for Sunday night's game between the Brooklyn Nets and Minnesota Timberwolves.
NBA・2 DAYS AGO
Insider

Only LeBron, Giannis, Kobe, 3 other NBA stars, and Caitlin Clark have recorded consecutive 30-point triple-doubles across the NBA, WNBA, and NCAA DI.
BASKETBALL・1 DAY AGO
The Spun

Will John Wall be moved ahead of the NBA’s trade deadline next month?. According to a report from The Athletic, multiple teams are monitoring the Houston Rockets situation ahead of the trade deadline. Wall, a five-time NBA All-Star in Washington, has not been playing in Houston this season. He’s...
NBA・1 DAY AGO
Sportsnaut

With the 2021-22 NBA season in full swing, basketball fans are putting on their jerseys and filling up arenas around
NBA・2 DAYS AGO
Sportsnaut

Bookmark. Save. Favorite. Do your thing. This is the one-stop-shop for everything NBA schedule-related heading into the 2021-22 season: Stream
NBA・23 HOURS AGO
fadeawayworld.net

Shaquille O'Neal Says He'd Call Out Magic Johnson If He Criticized His Lakers: "I'd Say, 'If Magic Got Something To Say, Well, Then He Has To Come Over And Say It To Us, To My Face.'"

The 2021/22 NBA season has everybody in the Lakers Nation trying to find solutions to a situation that seemingly doesn't have any. Fans, analysts, former and current players have had something to say about the Purple and Gold, but nobody has actually offered the solution to this. Magic Johnson, James...
NBA・2 DAYS AGO
fadeawayworld.net

Vince Carter was a superstar, one of the most entertaining players to ever enter the NBA. His highlight-reel dunks and explosive scoring made him must-watch TV, especially in his early years with the Toronto Raptors. However, another thing that made Carter so impressive was his longevity, he made a league appearance in 4 different decades.
NBA・1 DAY AGO
FastBreak on FanNation

The Utah Jazz are in Arizona to play the Phoenix Suns on Monday night.
NBA・1 DAY AGO