HOUSTON -- While Houston Texans general manager Nick Caserio didn't delve into the specifics and back-and-forth details of complicated trade discussions with the Miami Dolphins regarding Deshaun Watson, we do know how close the two sides were to a deal.

We also know that the Pro Bowl quarterback's unresolved legal situation got in the way of the Dolphins' desires, as Miami owner Stephen Ross wanted Watson to settle his 22 civil lawsuits that allege sexual misconduct from the NFL players' sessions with massage therapists.

And we know all of that movement occurred without a real bidding war.

What if, next go-'round, the New Orleans Saints enter the bidding?

We are hearing NFL gossip on that offseason possibility, which for Houston could certainly assure that Caserio gets his asking price of three first-round picks plus - something it seems Miami was willing to do, if only there could be assurances that Watson would be free of legal entanglements and eligible to play.

There wasn't time for that to unfold in October. There is time going forward. And an unencumbered Watson? It's easy to see the Dolphins re-engaging. And the Carolina Panthers re-entering the conversation.

Houston Texans Tracker for 2021: Check back often as we keep you up-to-date on Texans NFL news as Houston works on its roster-building

Texans give back to veterans at Michael E. DeBakey VA Medical Center

And yes, the Saints, too, with Drew Brees in retirement and his replacement, the maybe-temporary Jameis Winston, now hurt, there is logic to Saints boss Sean Payton chasing a young Pro Bowl QB.

It is not known whether Watson would waive his no-trade clause for such a move (he is not inclined to do so for every bidder - Philadelphia, for instance). But while one has to sort of squint to see what the Dolphins might achieve with him, or what the Panthers might achieve, the Payton track record makes it obvious what Watson might achieve there.

Caserio, when speaking to the media on the subject post-deadline, didn't want to look into the future Wednesday as far as any potential discussions with the Dolphins or other teams during the offseason, including March 16 when the league year begins and Watson is next eligible to be traded.

But he did say, "Anything as it pertains to the offseason and the draft, there will be plenty of time to talk about that.'' 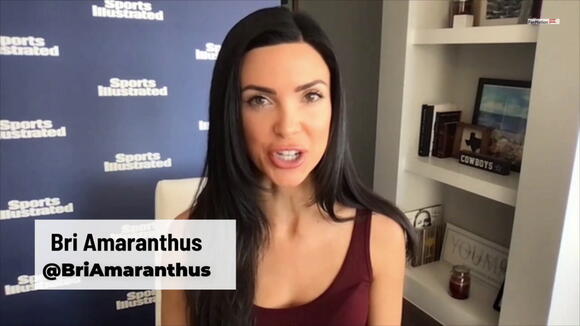 Justin Fields could very well find himself traded from the Chicago Bears after just one season. A recent report suggests
NFL・1 DAY AGO
Houston Chronicle

In a radio interview Tuesday morning, Texans general manager Nick Caserio talked about his decision to fire David Culley as head coach after one year, his openness to trade the team’s No. 3 overall pick in the upcoming NFL draft, his game-day involvement, and whether quarterback Deshaun Watson will play for the Texans again.
NFL・1 DAY AGO

The Houston Texans’ search for their fifth full-time coach in team history is underway, and the possibility is the team could actually land a candidate that their estranged franchise quarterback actually likes. However, according to general manager Nick Caserio, who joined “Payne & Pendergast” on Sports Radio 610 [KILT-AM]...
NFL・23 HOURS AGO
103.9 The Breeze

Could Troubled Deshaun Watson Be New York Giants Next QB?

As the New York Giants run through their candidates for the next general manager of the organization over the next few days, a not too distant eye can be kept on potential head coaching candidates. With each potential name, comes the speculation of what changes will be made based on the relationships of the individual that Big Blue hires. One of those candidates for the head coaching position brings with him the possibility of a major stir within one of the most buttoned up organizations.
NFL・1 DAY AGO
The Clemson Insider

More reports have surfaced surrounding Deshaun Watson and possible trade destinations. It's being reported by NFL Insider Jordan Schultz that the former Clemson quarterback has been in contact with recently (...)
NFL・2 DAYS AGO
WJTV 12

Ed-itorial: When it comes to the Saints QB situation – the numbers don’t lie

Since the Saints' season ended there's been a ton of conjecture about the club's quarterbacks.
NFL・2 HOURS AGO

Since the Miami Dolphins’ surprise firing of Brian Flores, some interesting reports have surfaced regarding his tenure with the team. One report revealed that Flores was apparently the driving force behind the Dolphins’ involvement in the Deshaun Watson sweepstakes. According to the same report, owner Stephen Ross didn’t have an interest in trading for the quarterback.
NFL・1 DAY AGO
SaintsNewsNetwork

Saints Game Balls for the 2021 Season

The 2021-22 season fell short of expectations for the New Orleans Saints because of several factors. However, several Saints players still had standout campaigns.
NFL・1 DAY AGO
TexansDaily

With the 2021 NFL season coming to an end, "Black Monday'' and beyond is a "thing.'' The Houston Texans have their David Culley decision following a lackluster year, and other teams will spent from now throughout the offseason making big decisions. Who else is on the hot seat? Who will...
NFL・1 DAY AGO
Sports Illustrated

Flores reportedly pushed for a trade for Watson while with the Dolphins.
NFL・23 HOURS AGO

HOUSTON -- The Houston Texans interviewed Philadelphia Eagles defensive coordinator Jonathan Gannon virtually on Tuesday one day after submitting an request for the Ohio native, according to league sources not authorized to speak publicly. Gannon, 39, will interview with the Denver Broncos in Philadelphia on Wednesday, including general manager George...
NFL・1 DAY AGO
Sportsnaut

Super Bowl 2022: The Tampa Bay Buccaneers are the reigning NFL champions, but who'll make the playoffs — and lift the Lombardi Trophy at the end of this season?
NFL・2 HOURS AGO
FanSided

Jerry Jones reaction to loss: Dallas Cowboys owner sent a stern message that sure sounded like a direct shot at Mike McCarthy after Sunday’s loss. Let’s spare hyperbole: The Dallas Cowboys playoff loss on Sunday afternoon was nothing short of embarrassing. Dallas entered the postseason with its sights...
NFL・2 DAYS AGO
Sportsnaut

NFL picks against the spread. NFL Divisional Playoffs edition. Oh boy, this two-day slate is going to be an absolute
NFL・1 DAY AGO
The Spun

The Philadelphia Eagles were eliminated from the postseason after their Wild Card round loss to the Tampa Bay Buccaneers. It wasn’t a good showing by the Eagles on either side of the ball, as quarterback Jalen Hurts turned the ball over twice and helped Philadelphia put just 15 points on the board in the disappointing loss. Hurts’ connection with talented rookie wide receiver DeVonta Smith, who didn’t seem to be on the same page as his quarterback, was dissected following the playoff loss. However, Smith got brutally honest about Hurts when asked about the signal-caller’s future as the Eagles’ QB1, via Dave Zangaro of NBC Sports.
NFL・1 DAY AGO