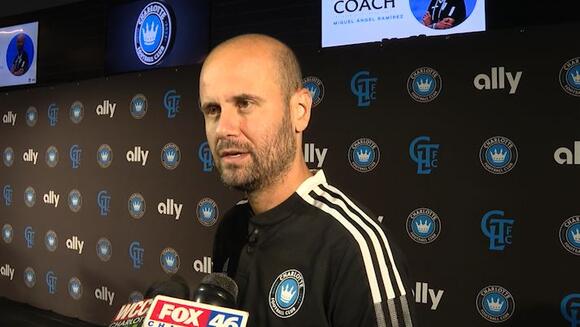 Charlotte FC, the Major League Soccer expansion team set to launch in its inaugural season in just a few months, has released some scheduling details, including its season opener as well as its home opener in Charlotte at Bank of America Stadium.

The club will open the season on the road on February 26th at 6 p.m. at Audi Field against D.C. United and will then make its city debut in Uptown on Saturday, March 5th at 8 p.m. against one of the league’s founding members, the Los Angeles Galaxy. The Galaxy has won the MLS Cup five times. Broadcast details have not yet been announced.

“This match is a massive opportunity for Charlotte FC to make our first impression in Major League Soccer, but also to soccer’s global audience,” said Club President Nick Kelly. “Playing against one of the most recognizable brands in the world in our inaugural home match only heightens the anticipation and makes this a truly historic moment in Charlotte sports history.”

What’s happening? Sign up here for FOX 46 Alerts and get Breaking News sent straight to your inbox

The full MLS schedule will be announced later this year.

“We’ve been bold in making our goals known for this match—to achieve a sellout crowd and have the most attended game in league history—and we’re confident everyone across the Carolinas will come together to create an unrivaled environment to help bring home the first of many points at Bank of America Stadium.”

Miguel Ángel Ramirez will make his debut with the team as the head coach. some other scheduling notes include the MLS Cup, which will be held on November 5th, two weeks ahead of the 2022 FIFA World Cup in Qatar.

For the latest news, weather, sports, and streaming video, head to FOX 46 Charlotte.

CHARLOTTE, N.C. (CHARLOTTE SPORTS LIVE) – Charlotte FC held their first preseason practice inside Bank of America Stadium, but that wasn’t the original plan. Thanks to winter storm Izzy, the team had to change venues from Clemson University to uptown charlotte— a last-minute change that didn’t’ seem to bother Coach Miguel Angel Ramirez. But that’s […]
MLS・9 DAYS AGO
Fox 46 Charlotte

The club's first signing, Sergio Ruiz, was spotted on the pitch today. It was his first practice with the team due to a delay with his visa.
CHARLOTTE, NC・2 DAYS AGO
Fox 46 Charlotte

The strike the Queen City has been waiting for is finally here and will be for the foreseeable future.
MLS・1 DAY AGO
WCNC

CHARLOTTE, N.C. — Charlotte FC announced Wednesday a multi-year agreement with Honeywell, signing on as the Club’s Official Partner and Healthy Buildings and Sustainability Partner. “We are pleased to welcome Honeywell to the Charlotte FC family,” Charlotte FC President Nick Kelly, said. “Honeywell is an important part of...
MLS・2 DAYS AGO

New images have surfaced of the LA Galaxy home kit for the 2022 season, leaving many fans speculating when we might see a release date for the latest jersey. The kit will continue to be manufactured by adidas and, with the MLS season due to get underway in February, it's expected we'll see these shirts arriving in stores very soon.
MLS・12 HOURS AGO
Axios Charlotte

Charlotte FC’s most expensive player came exactly one month before their inaugural Major League Soccer match. They spent around $5 million on Polish striker Karol Świderski from Greek side PAOK. Why it matters: Świderski is Charlotte’s equivalent of a franchise quarterback. Expect to see him score a lot of goals. The 25-year-old scored 35 goals […] The post Charlotte FC’s biggest signing yet appeared first on Axios Charlotte.
MLS・2 DAYS AGO
Fox 46 Charlotte

Brendan Marks of The Athletic talks college basketball on CSL

Duke is the best team in the ACC but what about North Carolina? They’ve struggled to play consistently well all season.
CHARLOTTE, NC・19 HOURS AGO
Fox 46 Charlotte

Fans return to Halton Arena to cheer on the Charlotte 49ers

Some coming to the Charlotte 49ers basketball game had mixed emotions because the COVID-19 positivity rate is still over 30% in Mecklenburg County.
CHARLOTTE, NC・1 DAY AGO