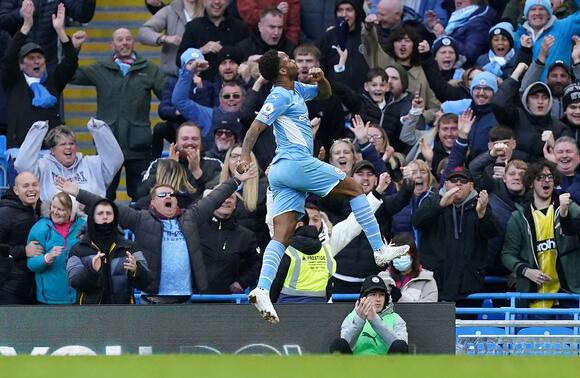 The England forward grabbed the opening goal in what proved a comfortable afternoon’s work for the champions at the Etihad Stadium.

It was the 26-year-old’s first strike in the Premier League since August in what has been a frustrating start to the season at club level.

Sterling has been unable to command a regular starting spot and, with his contract to expire at the end of next season, there has been speculation about his future.

City boss Guardiola said: “He needed that and in the first half he was an important player.

“He scored a brilliant goal, from an exceptional pass from Joao (Cancelo) again. He made a good game in a difficult one, because they defended really well.”

Guardiola also had words of praise for 19-year-old Cole Palmer, who shone on his first Premier League start, playing most of the game in the false nine position.

Guardiola said: “The striker position is the most difficult but as the game went on he felt more comfortable.

“He made a good assist, it was a good performance. He (now) already has 90 minutes in the Premier League in his mind. It is an incredible investment for the future.”

City were dominant throughout, with further goals coming from Rodri and Bernardo Silva.

Guardiola said: “It was really good, we’re very pleased. The last times we play against Rafa Benitez at Newcastle, always we struggled. We were better today, we conceded few chances and were patient.”

Everton offered little in terms of attack but manager Benitez took positives from the way his side maintained their organisation throughout.

Benitez said: “Obviously you have to be disappointed at the end but, in terms of the performance, we were well organised and defended with intensity.

“We weren’t a threat on the counter that we expected. We had two or three situations where we didn’t do enough.

“The first goal changed everything. We had chances on the counter but we didn’t create well. It was not easy. You can pay for any mistake.”

Going into what promises to be a cracker of a contest, a 10-point gap separates Manchester City and Chelsea, and the hosts will almost certainly have their eyes on further extending that margin at the top of the table. While Pep Guardiola’s men are on an 11-game winning streak across...
PREMIER LEAGUE・2 DAYS AGO
The Guardian

Manchester City boss Pep Guardiola believes he has become a better manager from watching his Chelsea counterpart Thomas TuchelHaving won 31 trophies in his glittering career, former Barcelona and Bayern Munich boss Guardiola is one of the preeminent managers of his generation but Tuchel famously got the better of him in last season’s Champions League final.Guardiola, 50, feels he can learn much from studying the way the 48-year-old German operates.The Spaniard said: “He is so creative, one of the few managers I learn from to become a better manager myself. He is excellent in all departments.“Since he was at Mainz,...
PREMIER LEAGUE・2 DAYS AGO

FIFA 22 Raheem Sterling SBC: How to unlock new 91 OVR Player of the Month

Pep Guardiola hits back at Thomas Tuchel’s claims over Covid

Pep Guardiola has hit back at Thomas Tuchel’s claim that Manchester City have not suffered as badly as Chelsea with Covid-19 cases in recent weeks. Chelsea boss Tuchel cited the absences of key players following positive tests at the London club as one of the reasons why champions City have pulled 10 points clear at the top of the Premier League.
PREMIER LEAGUE・2 DAYS AGO
Daily Mail

DANNY MURPHY: Manchester City's dominance is all down to how well Pep Guardiola shuffles his pack

It isn’t luck that Manchester City have coped better with Covid conditions than anyone else. The style of play under Pep Guardiola conserves energy and has allowed them to win 12 games in a row during a pandemic period of fixture congestion and enforced withdrawals. The way they’ve built...
PREMIER LEAGUE・1 DAY AGO
LFCTransferRoom

Following another Everton loss, this time to bottom club Norwich City, LFCTR take a look at the reaction from fans including quite angry Everton ones. Everton fans are seething as they watch the former Liverpool manager leads the Toffees down the table with a smile upon his face. The away...
PREMIER LEAGUE・1 DAY AGO

Chelsea boss Thomas Tuchel has labelled Pep Guardiola's Premier League Champions Manchester City as the benchmark in English football. The Sky Blues are ten points clear at the top of the table, showing impressive consistency at the half way point of the season. Speaking ahead of Saturday's early kick-off, Tuchel...
PREMIER LEAGUE・2 DAYS AGO
Daily Mail

Kevin De Bruyne was the only player left on the Etihad pitch half an hour after full-time, with fans in the corporate boxes still chanting his name. De Bruyne waved to the gallery with his two young boys running around on the grass in tow. It is fair to speculate...
PREMIER LEAGUE・1 DAY AGO
CityXtra

With the news breaking early last week that Manchester City had suffered a major Covid-19 outbreak within the first-team squad, losing 14 staff members and seven first-team players to isolation, the club's main concern was the looming Premier League tussle with Chelsea. Manchester City boss Pep Guardiola was one of...
PREMIER LEAGUE・2 DAYS AGO
The Independent

When it comes to news like Rafa Benitez’s sacking at Everton, much of the story usually centres on how “upbeat” the players now are, and how they felt he was taking them down.That is true, but this whole episode is really about something so much bigger. If the football side of the club finally sees sense, it should be the start of something new; a proper fresh start. It kind of has to be, since the hierarchy of the club has been hollowed out as a consequence of Benitez.That is his “legacy”.Benitez’s entire reign was really the end result of...
PREMIER LEAGUE・6 HOURS AGO

Pep Guardiola has hailed the mentality and professionalism of his Manchester City players after taking a seemingly vice-like grip on the title race.The City manager is impressed by how his team have dealt with adversity on and off the pitch to maintain their charge towards a fourth Premier League success in five years.In making his point, Guardiola cited the example of full-back Joao Cancelo who suffered facial injuries in an attack at his home last month.Cancelo has started all three of City’s games since, helping them come through a tough period in which they have been badly hit by...
PREMIER LEAGUE・3 HOURS AGO
CityXtra

The Latest on Raheem Sterling, Phil Foden, Trevor Chalobah, and the Complete Team News Ahead of Man City vs Chelsea (Premier League)

Guardiola, who will return to the Manchester City dug-out after missing the Blues' 4-1 win over Swindon Town in the FA Cup last Friday due to COVID-19, will be looking to do the double over Thomas Tuchel's Chelsea this weekend. A second-half Gabriel Jesus strike inflicted a 1-0 win over...
PREMIER LEAGUE・2 DAYS AGO
The Independent

Arsenal have requested for Sunday’s north London derby at Tottenham to be postponed.The Gunners are scheduled to make the short journey to face their rivals in the Premier League this weekend but have a host of players missing due to coronavirus, injury, suspension and the Africa Cup of Nations.Martin Odegaard missed Thursday’s goalless Carabao Cup semi-final first-leg draw at Liverpool due to Covid while the likes of Emile Smith Rowe and Takehiro Tomiyasu had been ruled out through injury.🚨 We can confirm we've made an application to the Premier League to postpone Sunday’s north London derby.#TOTARS— Arsenal (@Arsenal) January 14,...
PREMIER LEAGUE・2 DAYS AGO
The Independent

Rafael Benitez has taken a fresh swipe at Lucas Digne after selling the France international, a move he says has allowed Everton to balance both his squad and the financial books at Goodison ParkDigne joined Aston Villa on Thursday in a deal rising to £25million after falling out with Toffees boss Benitez.The left-back took a parting shot at Benitez as the transfer went through, saying on social media: “Sometimes it only takes one person from outside to destroy a beautiful love affair.”Benitez, speaking for the first time on Digne’s departure, said: “I am the manager and I take the responsibilities...
PREMIER LEAGUE・2 DAYS AGO
AFP

Rafael Benitez was sacked as Everton manager on Sunday after just 200 days in charge of the struggling Premier League club with former player Wayne Rooney tipped as favourite to take over. Benitez was an unpopular appointment in June last year after his long spell with Everton's Merseyside rivals Liverpool. The Spaniard paid the price for a dismal run of nine defeats in Everton's last 13 league matches, culminating in a 2-1 loss at lowly Norwich on Saturday. "Everton Football Club can confirm the departure of Rafael Benitez as first-team manager," a club statement said.
PREMIER LEAGUE・49 MINUTES AGO
SkySports

Pep Guardiola recognised the significance of Manchester City’s 1-0 victory over Chelsea but reiterated the Premier League title could not be won in January. Kevin De Bruyne struck his fifth goal against former club Chelsea with 20 minutes remaining at the Etihad to earn champions City a hard-fought victory over the European champions which saw them take another crucial step towards retaining their crown.
PREMIER LEAGUE・1 DAY AGO