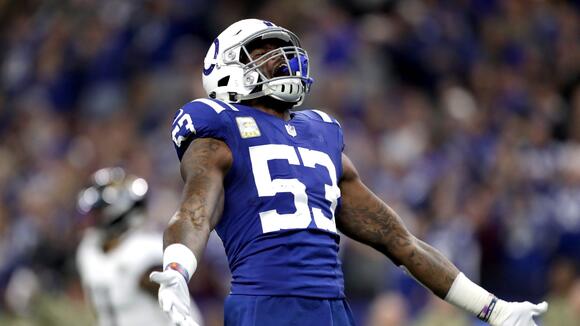 ORCHARD PARK, N.Y. — Darius Leonard came close to missing his first game of a season that has been defined in some ways by his ankle injury, but the Colts’ All-Pro linebacker is active for Sunday’s AFC showdown with the Buffalo Bills.

Leonard, who was a game-time decision after feeling his ankle jam up against the Jaguars, has played 98.3% of the Colts’ defensive snaps this season, third-most on the team behind middle linebacker Bobby Okereke and cornerback Kenny Moore.

Veteran starting cornerback Xavier Rhodes is also active after Indianapolis head coach Frank Reich said Friday that they’d have to monitor him going into the game. Rhodes, who has struggled all season long with a calf injury, is expected to rotate with second-year cornerback Isaiah Rodgers.

For the third consecutive game, veteran running back Marlon Mack is inactive as the Colts ride Jonathan Taylor, the NFL’s leading rusher, and satellite back Nyheim Hines, who plays mostly in passing situations.

The No. 3 back on the Colts gameday roster has to play special teams, and undrafted free agent Deon Jackson has played that role the past three weeks.

The Kansas City Chiefs officially booked their ticket to a rematch with Josh Allen and the Buffalo Bills in the Divisional Round after blowing out the Pittsburgh Steelers on Sunday. As we all know, Patrick Mahomes and Co. beat the Bills 38-24 last season in the AFC title game and...
NFL・2 DAYS AGO
Chicago Tribune

If the Chicago Bears were intent on doing comprehensive research for their simultaneous searches for a new head coach and general manager, perhaps their Saturday night homework should have ended with a peek into the interview rooms at Highmark Stadium in Orchard Park, N.Y. Start with Bill Belichick. Legendary coach of the New England Patriots. Defensive mastermind. Six-time Super Bowl winner. ...
NFL・2 DAYS AGO
Sportsnaut

The 2021 NFL regular season is over and playoffs are in full swing, which brings us to one of our
NFL・7 HOURS AGO

The future of the Las Vegas Raiders is uncertain. Despite overcoming immense obstacles on the way to a playoff berth, interim head coach Rich Bisaccia is far from a lock to stay with the team. And with quarterback Derek Carr’s contract expiring soon, he could become a trade asset if the Raiders choose not to commit to him.
NFL・1 DAY AGO
Chicago Tribune

The Chicago Bears will interview Morocco Brown for their GM vacancy. Here’s what to know about the Indianapolis Colts director of college scouting.

The Chicago Bears have reached out to at least 15 general manager and 10 coaching candidates for interviews. As they go through the process, we’re looking at each of the prospects. Morocco Brown was scheduled to interview for the general manager position Tuesday, according to NFL Network. Morocco Brown Title: Indianapolis Colts director of college scouting Age: 45 Experience GM Chris Ballard ...
NFL・1 DAY AGO
The Spun

Tony Romo didn’t like how Cowboys quarterback Dak Prescott handled the end of the game on Sunday. After Prescott slid at the 25-yard line, he hurried up to the line with the center but didn’t find the ref so he could properly spot the ball. Romo confirmed during...
NFL・2 DAYS AGO
The Spun

Ben Roethlisberger’s NFL career came to a close on Sunday night with the Steelers’ 42-21 loss to the Chiefs. The Steelers started out the game strong (at least defensively) before giving up 21 points in the final six minutes of the second quarter. With how the Steelers offense...
NFL・2 DAYS AGO

The Dallas Cowboys (12-5) pumped their chests with confidence and swagger headed into Sunday's Wild Card Game against the San Francisco 49ers (10-7) at AT&T Stadium, but left disappointed after a 23-17 loss to a historic NFC rival. The entire organization is being heavily criticized for the loss, but the...
NFL・1 DAY AGO

The Philadelphia Eagles were eliminated from the postseason after their Wild Card round loss to the Tampa Bay Buccaneers. It wasn’t a good showing by the Eagles on either side of the ball, as quarterback Jalen Hurts turned the ball over twice and helped Philadelphia put just 15 points on the board in the disappointing loss. Hurts’ connection with talented rookie wide receiver DeVonta Smith, who didn’t seem to be on the same page as his quarterback, was dissected following the playoff loss. However, Smith got brutally honest about Hurts when asked about the signal-caller’s future as the Eagles’ QB1, via Dave Zangaro of NBC Sports.
NFL・2 DAYS AGO
Popculture

Russell Wilson could be moving on from the Seattle Seahawks soon. According to Ian Rapoport of the NFL Network, the Seahawks quarterback wants to explore his options to see what else is out there for him. This comes after the Seahawks finished the 2021 season with a 7-10 record. It's the first time since Wilson became the starting quarterback in 2012 that the Seahawks recorded a losing season.
NFL・2 DAYS AGO
The Spun

There aren’t many quarterbacks who receive as much criticism as Kirk Cousins does. Ever year, it feels like the veteran signal-caller is under fire. During the latest episode of the “All Things Covered” podcast, Minnesota Vikings cornerback Patrick Peterson shared his thoughts on Cousins’ future with the team. Some analysts have speculated about Cousins’ future in large part because the team will have a new regime in place for the 2022 season.
NFL・1 DAY AGO
CBS Boston

BOSTON (CBS) — The offseason has begun for the New England Patriots, and Bill Belichick and company have a lot of work to do in-house. The Patriots have 22 players set to hit free agency, and 16 of them were either starters or played significant roles for the 2021 team. J.C. Jackson, Devin McCourty, Dont’a Hightower and Trent Brown highlight the lengthy list of soon-to-be free agents for New England. Here’s a quick look at some players who may be playing elsewhere — or not at all — in 2022. Unrestricted Free Agents J.C. Jackson, CB Devin McCourty, S Dont’a Hightower, LB Jamie Collins, LB Ja’Whaun Bentley, LB Carl...
NFL・2 DAYS AGO
USA TODAY

Tom Brady could use a boost from the Tampa Bay Buccaneers defense that was so essential during the stretch run to winning the last Super Bowl.
NFL・2 DAYS AGO
Sports Illustrated

Rice is headed to Los Angeles to play for Lincoln Riley and the Trojans.
NFL・1 DAY AGO
CBS Boston

FOXBORO (CBS) — The Patriots are slated to make the 21st overall pick in the 2022 NFL Draft, with the team’s draft slot finalized thanks to the results from Wild Card weekend. It’s a draft spot that New England is pretty familiar with. The Patriots have picked 21st a total of six times in the franchise’s history, though it has been a decade since the team last picked in that spot. New England has drafted in the spot four times since Bill Belichick took over, and the results have been pretty good with those four selections. Here’s a look at who the...
NFL・2 DAYS AGO
Audacy

Welcome to the 2022 Coaching Tracker, a running tab of all candidates and interview requests for every NFL head coach, GM and coordinator opening this offseason.
NFL・2 HOURS AGO