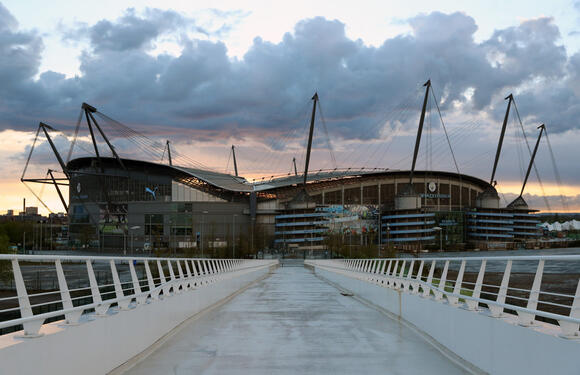 Pep Guardiola’s men came back strong against Club Brugge and Manchester United before the international break, with the Citizens making a mockery of their cross-town rivals in a 2-0 victory courtesy of an all-round effort from the whole team.

As we return from yet another dreadful international break, all the attention now turns towards Premier League football as Manchester City go up against Rafa Benitez’s side for three important points.

The Blues currently sit third in the Premier League with a six-point difference before this game. A disappointing loss against Crystal Palace gave City a slight setback in this season’s cut-throat title race, but the team bounced back extraordinarily against Ole Gunnar Solskjaer’s side.

Meanwhile, Everton have had a shaky start after producing a mixed bag of results. Under Rafa Benitez’s new guidance, the club has performed way below what was expected and are currently 11th in the table with four wins, three draws and four losses.

Here is how you can watch Manchester City’s game against the Toffees at the Etihad Stadium this weekend!

In the UK, Sunday’s match will be broadcast live only on Sky Sports Premier League, Sky Sports Main Event and SKY GO Extra.

For those who wish to follow the game via audio channels, BBC Radio 5 Live and BBC Radio Manchester will provide live coverage of the game as well.

beIN Sports Premium 1 and beIN Sports English will provide coverage of the game for viewers in the United Arab Emirates.

The City Football Group-owned clubs have proved to be a temporary home for several developing prospects at Manchester City, such as the likes of Pablo Maffeo, Marlos Moreno and Yan Couto in the recent past. With the umbrella company holding stakes in nine different clubs in different leagues around the...
PREMIER LEAGUE・2 DAYS AGO
CityXtra

FIFA have named the world XI of the best players in the world over the past year picked by fans across the globe, with five Premier League players making the star-studded lineup, as confirmed on Thursday. Kevin De Bruyne has been named as part of a three-man midfield alongside Chelsea...
PREMIER LEAGUE・1 DAY AGO
The Guardian

A comprehensive round-up of all the latest Manchester City transfer news and gossip from across the globe, after the nineteenth day of the winter transfer market. PSG left-back Lavyin Kurzawa has been offered to Manchester City as an option on the bench or substitute. (Baptiste Durieux, RTL France) Bayern Munich...
PREMIER LEAGUE・2 DAYS AGO

With the success of Pep Guardiola's false nine system this season, it would be easy to forget Manchester City are in the race for a clinical striker this summer. Sergio Agüero's constant knee troubles combined with Gabriel Jesus' position change allowed the Catalan trial a number of different players in the role - including Kevin De Bruyne, Raheem Sterling, and Phil Foden.
PREMIER LEAGUE・1 DAY AGO
CityXtra

On Friday, numerous reports from South America stated that Manchester City were in talks to sign Julián Álvarez - one of Argentina's hottest prospects, with one journalist reporting that a deal was "about to close" for the player to move to England. The 21 year-old was named South...
PREMIER LEAGUE・20 HOURS AGO
CityXtra

The England international is currently enjoying his best run of form for the Premier League champions in over a year, after what has been a difficult period on the pitch at the Etihad club for the London-born star. The 27 year-old lost his place in the starting XI halfway through...
PREMIER LEAGUE・1 DAY AGO
CityXtra

As several of the world's leading companies, football brands, and clubs announce their respective awards and rankings for the year of 2021, the number one football video game has now released their world XI from the last 12 months. After a round of voting from millions of players of FIFA...
PREMIER LEAGUE・1 DAY AGO

Riyad Mahrez's desire to avoid a premature return to Manchester could not be fulfilled as Algeria suffered their third group-stage loss to surrender their Africa Cup of Nations crown after a disappointing tournament for Djamel Belmadi's side. While Manchester City have not overly missed the former Leicester man in their...
PREMIER LEAGUE・1 DAY AGO
San Diego Union-Tribune

Southampton hosts the Manchester City, the top team in the Premier League, at St. Mary’s Stadium on Saturday, January 22 (1/22/2022). Fans will watch the 12th-ranked Saints try to slow the ascent of the reigning champions in one of 10 exciting Premier League matchups this weekend. In the U.S., five of the matches will be broadcast live on NBC, USA and other TV networks, while six will be available on Peacock Premium. Full schedule below.
PREMIER LEAGUE・1 DAY AGO
CityXtra

In terms of potential, James McAtee is one of the best up and coming English prospects at present. Current pundit and former player Robbie Savage echoes the aforementioned statement, previously singling out the 19-year old to be the next breakout young star to emerge from a Premier League club. Manchester...
PREMIER LEAGUE・2 DAYS AGO

Mahrez has been in sensational form for the Premier League champions since the start of the campaign, with the former Leicester City star often coming up with the goods in front of goal in the absence of a natural striker in the first-team ranks at the Etihad Stadium. The 30-year-old,...
PREMIER LEAGUE・2 DAYS AGO
CityXtra

Given the cutthroat nature of representing Manchester City at the highest level, the club have adopted a tendency to send players on loan, in order to accelerate their development and increase their chances of first-team football. In the 2021/22 season alone, a staggering 36 players from Manchester City have been...
PREMIER LEAGUE・1 DAY AGO
The Guardian

While many argue whether or not they are buidling a dynasty, if they are not one already, no one can deny how good Manchester City is. They look to continue their impressive 2021-22 season when they take on Southampton on Saturday. City comes into the weekend with an 11-point lead...
UEFA・3 HOURS AGO
CityXtra

Raheem Sterling has cemented his reputation as one of the most key players for Manchester City and England in recent years, with the London-born attacker having established his status as one of the deadliest wingers in world football. The 27-year-old has developed into the embodiment of the modern-day winger since...
PREMIER LEAGUE・18 HOURS AGO
CityXtra

The Premier League champions have been heavily linked with a move for 21-year-old forward Julian Alvarez, who has emerged as one of the brightest attacking prospects in South America following his rise through the academy ranks at River Plate. Alvarez, who has made five appearances for the Argentina senior squad,...
PREMIER LEAGUE・3 HOURS AGO
The Guardian

Minute-by-minute report: Josh Sargent scored one of the goals of the season – if not the goal of the season – as Dean Smith’s team swept aside their relegation rivals. Scott Murray was watching.
PREMIER LEAGUE・15 HOURS AGO
NBC Sports

Everton begins life after Rafa Benitez with a visit from another ex-Liverpool great, as Steven Gerrard leads Aston Villa into Goodison Park for an early Saturday tilt (watch live, 7:30am ET on – USA Network – online via NBCSports.com). The Toffees are stuck at 16th on the table...
PREMIER LEAGUE・2 HOURS AGO