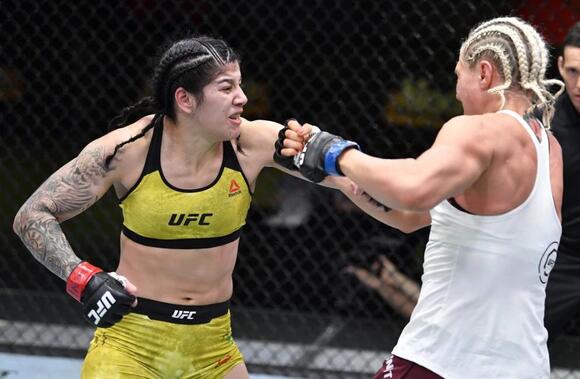 “That’s what I’m here for — I’m here to fight the best,” the Brazilian Vieira said via an interpreter afterward. “Respect my skills.”

Tate, former bantamweight champion, was fighting in her second bout after a five-year layoff. She returned victorious in July with a TKO victory. But she ran into a problem in the fifth round as Vieira battered her en route to the win.

Tate (19-8) was taken to a local hospital for a CT scan on her head and face, UFC said afterward.

“I’ve always dreamed about being in a main event against a legend,” Vieira said. “To be able to live that moment and get a victory, I don’t have words to express.”

Miesha Tate does not believe Amanda Nunes will bounce back against Julianna Pena: “The seed of doubt has been planted in Amanda’s mind”

Miesha Tate doesn’t think Amanda Nunes will be able to bounce back in a potential rematch against Julianna Pena this year. At UFC 269, Julianna Pena shocked the world by defeating Amanda Nunes to capture the UFC bantamweight title. Ever since then there’s been talk of what would happen if the pair ran it back, with “The Lioness” still being the most dangerous threat at 135 pounds.
UFC・2 DAYS AGO
MMAWeekly.com

Former UFC women’s bantamweight champion Miesha Tate gave her prediction for the UFC 270 co-main event between flyweight champ Brandon Moreno and former titleholder Deiveson Figueiredo. The first time Figueiredo and Moreno met inside the Octagon, the two fought to a majority draw at UFC 256 in December 2020....
UFC・12 HOURS AGO
MMAmania.com

Former Ultimate Fighting Championship (UFC) women’s “champ-champ,” Amanda Nunes, recently announced her plans to split with her long-time camp, American Top Team (ATT), in order to start her own gym in South Florida. The move comes one month after her upset loss at the hands of Julianna...
UFC・1 DAY AGO

Many UFC fans have likely been typing Nate Diaz next fight recently in their MMA Google searches, as they wonder
UFC・2 DAYS AGO
Insider

Francis Ngannou and Ciryl Gane fight for the UFC heavyweight title Saturday in Anaheim, and it will be like two wrecking balls colliding at speed.
UFC・1 DAY AGO
The Independent

Francis Ngannou would relish the opportunity to go head-to-head with Tyson Fury in his next fight.The 35-year-old UFC heavyweight champion faces former team-mate Ciryl Gane in a unification bout in Anaheim California at the weekend, but would take to the octagon with WBC champion Fury having challenged him to a contest wearing MMA’s lighter gloves.Asked if everything goes to plan against Gane whether he would rather face him or defend his title against Jon Jones in his next fight, the Predator told a press conference: “If you give me the two options, I would choose fighting Tyson Fury.One of...
UFC・2 DAYS AGO
The Independent

Following one of the most successful and engrossing years in the history of the UFC, the mixed martial arts promotion will look to keep building in 2022.2021 saw Conor McGregor fight twice, marking his most active year since 2016. The Irishman lost to Dustin Poirier in each outing, suffering a horrific broken leg in the most recent, but he is targeting a summer return to the Octagon.Elsewhere, newer stars like Israel Adesanya, Khamzat Chimaev and Sean O’Malley will look to further enhance their legacies and profiles, while featherweight queen Amanda Nunes will surely seek to regain her bantamweight belt...
UFC・3 HOURS AGO

Rey Mysterio to be Featured as WWE 2K22 Cover Athlete

Mysterio has had a storied career with numerous achievements, the latest of which now includes gracing the cover of WWE’s 2K game.
WWE・2 DAYS AGO
The Independent

If Francis Ngannou were to look in the mirror, he might just see an improbable green glint in the dark pools of his eyes.Maybe he can already picture the dollars, stacked much higher than his 6ft 3in frame and much wider than those granite shoulders.For it must be so enticing, the prospect of a crossover bout with the biggest name in boxing, especially for a phenomenon who is severely undervalued by his employers and who started fighting long before he set foot in a ring. Growing up in poverty in Cameroon, Ngannou began working in sand quarries at the...
UFC・1 DAY AGO
Footwear News

Ahead of his heavyweight clash at UFC 270 against Ciryl Gane, Gymshark has revealed a compelling community-focused campaign starring its sponsored power-punching champion Francis Ngannou. The effort, dubbed “United We Sweat,” highlights the shared values between the company and the Cameroon-born mixed martial artist, which is fostering and celebrating community. The first standalone campaign for Ngannou also offers a message of uniting, touches on the power of perseverance and puts the focus on the fighter’s mindset as he heads into the biggest fight of his career. ​​ “Obviously the brand is quality, and the material is very good, I personally use the...
UFC・2 DAYS AGO
SPORTbible

Dana White has refused to rule out allowing Jake Paul to fight in the UFC despite the two being involved in a heated feud. Outspoken Paul has repeatedly gone after the UFC president, accusing him of being addicted to cocaine and not paying his fighters fairly. He also said he...
UFC・1 DAY AGO

Ciryl Gane’s coach has dismissed Francis Ngannou’s suggestion that sparring footage of the upcoming opponents was edited.Fernand Lopez trained Ngannou prior to the French-Cameroonian’s UFC heavyweight title win last March, and he has continued to coach Gane all the while.Ngannou and Gane used to train together at Lopez’s MMA Factory gym in France, and the former teammates are set to become opponents this month in the main event of UFC 270.Gane carries the interim heavyweight title into the bout, having obtained the gold in August, and the build-up to the contest has been dominated by conversations around sparring footage...
UFC・2 DAYS AGO
The Independent

Francis Ngannou is a fighting phenomenon: the honorary ‘baddest man on the planet’ as UFC heavyweight champion, and the most ferocious power-puncher in the promotion’s history.The French-Cameroonian’s professional mixed martial arts record stands at 16-3, while his UFC record is 11-2 since his debut in 2015 – with 10 of those wins coming via knockout or TKO.Ngannou, 35, in fact went 6-0 in the company, with five of those victories achieved via KO/TKO and one coming via submission, before he suffered back-to-back decision losses.The first of those two defeats was a humbling by then-champion Stipe Miocic, but Ngannou worked...
UFC・1 HOUR AGO
Sportsnaut

AEW Rankings: Adam Cole continues to rise up the rankings

Conor McGregor is tipped to return this summer to the UFC for his comeback from a broken leg, the UFC President Dana White said this week.
UFC・1 DAY AGO
Sportsnaut

UFC and Dapper Labs announced digital collectible platform UFC Strike on Thursday, with plans to launch and release the first set of NFT packs Sunday. Following UFC 270, UFC Strike will sell 100,000 packs of three digital video moments (for $50 each). The video NFT format has become somewhat familiar since NBA Top Shot’s ascendance last year. But there will be some notable differences this time.  Dapper Labs was able to add broadcast audio to its UFC Strike moments, thanks to UFC’s production control of the company’s events. The collection also features a mixture of men and women fighters—Francis Ngannou, Amanda Nunes,...
UFC・2 DAYS AGO
Footwear News

Ahead of the UFC 270 this weekend, Dwayne “The Rock” Johnson’s Project Rock brand has been announced as the official footwear partner of UFC. Under the multi-year agreement, Johnson’s performance brand with Under Armour will provide footwear to all UFC athletes and their corner teams. The footwear will be a part of the athletes’ UFC Fight Kits and will be worn during all official UFC Fight Week activities, workouts, weigh-ins and more. “UFC athletes are amongst the greatest, toughest, focused, most disciplined and hardest training athletes on the planet,” said Dwayne Johnson in a statement. “I am proud, grateful and humbled that my...
CELEBRITIES・22 HOURS AGO
thebodylockmma.com