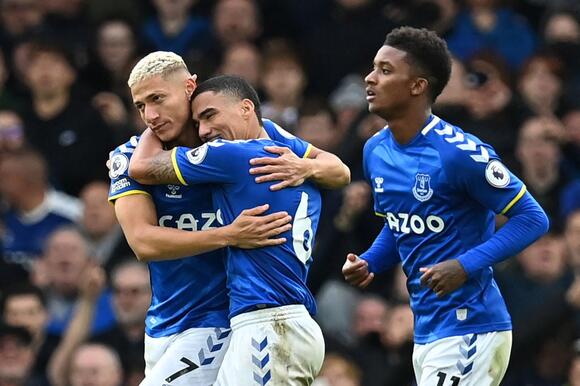 Everton go searching for their first away win in the Premier League since late August on Sunday, but they’ll have to be near-perfect to achieve it as they travel to Manchester City .

Rafael Benitez ’s team are on a run of five league games without a win and have just one victory in the last eight in all competitions, and injuries have not cleared up over the international break to make matters even tougher.

City, by contrast, are looking to keep pace with Chelsea at the top of the table and have only lost once in league play since the opening game of the season - with a two-goal victory over rivals Man United in their last outing showing how far ahead of the chasing pack they are.

Pep Guardiola has injury concerns of his own to deal with, but City will still expect to take another three points at home.

When is the match

The game kicks off at 2pm GMT on Sunday, 21 November at the Etihad Stadium.

Ferran Torres is the only long-term injury concern for Man City, but Kevin de Bruyne is out after testing positive for Covid . Guardiola has also said Jack Grealish is unlikely to feature, but Aymeric Laporte is back from suspension and Phil Foden should be fit to play too.

Everton are without a host of players who would normally start, including the injured Dominic Calvert-Lewin, midfielder Abdoulaye Doucoure and centre-back Yerry Mina. Mason Holgate is also suspended and central pair Tom Davies and Andre Gomes are also out.

The Manchester derby plus Liverpool vs Man Utd are among the Premier League fixtures to be shown live on Sky Sports in March. Ralf Rangnick will take his side to the Etihad on Sunday 6 March, with kick-off at 4.30pm. Later in the month, Man Utd will take on Liverpool at Anfield on Sunday 20 March, as United face a vital month in their push for a top-four finish.
PREMIER LEAGUE・2 DAYS AGO
The Independent

Everton managerial candidate Vitor Pereira admits he is hurt by fan opposition to his potential appointment but it has not put him off wanting the job.The club’s search for a seventh permanent boss in six years took a bizarre twist when the Portuguese, who has emerged as owner Farhad Moshiri’s preferred option, appeared on live television to discuss his credentials.Pereira has already had two interviews with Moshiri but said he did not know what the outcome was and the “decision was the club’s”.Reports the former Porto and Fenerbahce coach was edging closer to replacing Rafael Benitez – whose appointment as...
PREMIER LEAGUE・2 DAYS AGO
The Independent

Wolves have turned Hwang Hee-chan’s loan from RB Leipzig into a permanent deal.Hwang moved to Molineux in the summer, with Wanderers having the option to buy the South Korea international.The Premier League club have activated that clause in the agreement and the 26-year-old will sign a deal until 2026 at the end of this season.“With every new signing you have to expect a period of settling in and adapting to their new environment, but straight away, Hee Chan has shown exactly what we expected of him as a player, but he’s also settled in quickly and made an impact,” Wolves’...
PREMIER LEAGUE・2 DAYS AGO
Daily Mail

Traore furore! Wolves star Adama is finalising a loan move to BARCELONA after snubbing a permanent Tottenham switch, leaving Antonio Conte still stuck with none of the signings he demanded from Daniel Levy

Adama Traore is finalising a loan move to Barcelona after his switch to Tottenham stalled. The Spanish side are offering a loan with £30million option to buy for the 26-year old. Traore was expected to join Tottenham this week but was not sold on the idea of converting to...
PREMIER LEAGUE・2 DAYS AGO

Liverpool's Mohamed Salah is the hero of Egypt once again after scoring the decisive penalty against Ivory Coast to send the Pharaohs through to the quarter-finals of AFCON. Mohamed Salah has done it for his home country once again. If sending them to the World Cup in 2018 wasn't enough, he's now secured their place in the quarter-finals of this years AFCON.
PREMIER LEAGUE・2 DAYS AGO
LFCTransferRoom

Newcastle’s hunt for further January recruits is destined to go down to the wire as selling clubs dig in for a fight.The Magpies, in their first transfer window under Amanda Staveley’s largely Saudi-backed consortium, have spent the last two weeks striving to add to their earlier signings of Kieran Trippier and Chris Wood.However, they have been met with stern resistance by clubs either determined not to sell their best players this month, or intent on not doing so until they have squeezed every last penny they can out of the Premier League’s newest financial power.Newcastle’s search has sparked daily speculation...
PREMIER LEAGUE・2 DAYS AGO
punditarena.com

A number of Premier League fixtures that were postponed earlier in the season have been rescheduled, with new dates being confirmed. The majority of these games were postponed due to Covid outbreaks among Premier League squads, something which ended up becoming quite a contentious issue. Many believed that clubs were...
PREMIER LEAGUE・2 DAYS AGO

Follow live coverage as Huddersfield Town face Stoke City in the Championship today.English football's second tier is one of the most-watched leagues in Europe with a relentless fixture schedule and the prize of a place in the Premier League on offer combining to make it one of the most dramatic and exciting competitions in world football.Fulham were relegated from the top tier in 2021 but return refreshed and hopeful of making it back and equally Sheffield United no doubt enjoyed their spell in the Premier League too and are also keen to return.West Bromwich Albion know what it takes to earn promotion from the Championship and will again be one of the favourites to do it again with one of the best squads in the division.It isn't all about the battle for promotion, either, with Hull City, Peterborough and play-off winners Blackpool hoping their ascensions from League One aren't short-lived as they battle to avoid the drop at the bottom.We will bring you all the action and updates from today's game in the live blog below:
PREMIER LEAGUE・19 HOURS AGO
The Independent

Lyon have denied agreeing a deal with Newcastle United over the sale of midfielder Bruno Guimaraes.According to reports on Wednesday morning, the Premier League side had agreed a fee for the 24-year-old Brazil international who was set to undergo a medical while away with his national team this week.However, the Ligue 1 side insist there is no agreement in place.They said in a statement on their official website: “Olympique Lyonnais categorically denies the false information disseminated by many media reporting an agreement between Newcastle and OL for the transfer of Brazilian international midfielder Bruno Guimaraes.“In this transfer window period, where...
PREMIER LEAGUE・2 DAYS AGO
The Independent

Police have arrested a man accused of racially abusing former England footballer Ashley Cole during an FA Cup third round tie.A 24-year-old is in custody on suspicion of a racially aggravated public order offence, Wiltshire Police said on Saturday.Cole, who played left-back for Arsenal and Chelsea during a lengthy top-flight career, was part of the ITV broadcast team when Swindon Town played Manchester City County Ground earlier this month.The incident reportedly occurred in the corner between the Town End and the Don Rogers stand, where the ITV punditry team was based.Superintendent Phil Staynings, Swindon commander, said: “Racial abuse of any...
PREMIER LEAGUE・3 HOURS AGO
The Independent

Gambia will aim to cause the upset of the Africa Cup of Nations when they take on hosts Cameroon in the quarter-final on Saturday.The underdogs’ head coach Tom Saintfiet is being realistic about their chances. But the team have had impressive results so far in this campaign and they aren’t counting themselves out.“Naturally we had ambitions but we could not have imagined this,” Sainfiet told Sky. “We knew we had qualities after winning our qualification group against Angola, DR Congo and Gabon. They’re all respected countries but we never had experience of a big tournament.“Being in the quarter-finals, we like...
PREMIER LEAGUE・5 HOURS AGO

Chelsea's calendar for March has been confirmed after the latest round of Premier League TV selections were announced. Thomas Tuchel's side currently have four confirmed games in the schedule for March, however that could increase subject to their progression in the FA Cup. They will play three Premier League matches,...
PREMIER LEAGUE・2 DAYS AGO