Man City vs Everton prediction: How will Premier League fixture play out today? 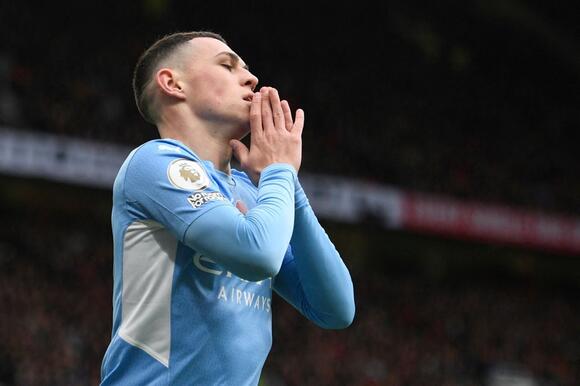 Manchester City are hoping Phil Foden will be fit to play as they host Everton this weekend, looking to keep pace at the top of the Premier League table.

Pep Guardiola ’s side comfortably beat Man United before the international break to move into second place, with just one defeat to their name since the opening day of the campaign.

Everton are struggling for consistency this term and after a good start to the campaign, they have recently gone five without a win and have dropped into the bottom half of the table.

Rafael Benitez is still having to cope without a number of regular starters who are sidelined and the absence of striker Dominic Calvert-Lewin continues to affect the Toffees who have only scored four goals in their last five.

When is the match

The game kicks off at 2pm GMT on Sunday, 21 November at the Etihad Stadium.

Ferran Torres is the only long-term injury concern for Man City, but Kevin de Bruyne is out after testing positive for Covid . Guardiola has also said Jack Grealish is unlikely to feature, but Aymeric Laporte is back from suspension and Phil Foden should be fit to play too.

Everton are without a host of players who would normally start, including the injured Dominic Calvert-Lewin, midfielder Abdoulaye Doucoure and centre-back Yerry Mina. Mason Holgate is also suspended and central pair Tom Davies and Andre Gomes are also out.

Manchester United rode their luck in the first half, but were ruthless in the second to continue their push for the top four
PREMIER LEAGUE・2 DAYS AGO
The Guardian

Join John Ashdown for team news and the latest transfer moves before another busy weekend of football
PREMIER LEAGUE・9 HOURS AGO
90min.com

Aston Villa travel to Everton on Saturday afternoon looking to end a run of four games without a win. Since winning four of his first six at the helm, Steven Gerrard has seen his men fall into a slump in recent weeks. A 1-0 FA Cup defeat to Manchester United followed Premier League losses against Chelsea and Brentford, but the Villans fought hard to earn a 2-2 draw in the league against the Red Devils last time out.
PREMIER LEAGUE・14 HOURS AGO
90min.com

Runaway Premier League leaders Manchester City travel to Southampton on Saturday evening. For the fourth time in five seasons, Pep Guardiola has led his side to at least a dozen consecutive Premier League victories in pursuit of a tenth league title across the Catalan's trophy-laden managerial career. Porto are the only club in Europe in the midst of a longer domestic winning streak (13 games).
PREMIER LEAGUE・1 DAY AGO

Watford and Norwich City are both trying to avoid a quick relegation, and they'll square off in a critical battle Friday in the English Premier League. Both teams were promoted after last season, and both are flirting with the bottom of the EPL table. Watford (4-2-13) is 17th, one point clear of No. 18 Norwich (3-4-14), and the Hornets have two games in hand. Norwich comes off a pivotal 2-1 home victory last Saturday against Everton that snapped a six-game losing streak, while Watford drew 1-1 with Newcastle the same day to snap its own six-game slide.
PREMIER LEAGUE・1 DAY AGO
The Independent

Pep Guardiola insists he will not “betray” Manchester City when he comes to decide on his long-term future.The much-decorated City manager, who turned 51 earlier this week, is contracted at the Etihad Stadium until the end of next season.As it did prior to Guardiola signing his last two extensions, speculation over his future is likely to increase as the deal runs down.They gave me everything, so I cannot betray them or do anything wrong to themPep GuardiolaYet the Spaniard is not looking that far ahead yet, is relaxed about the situation and, when he eventually does decide to move on,...
PREMIER LEAGUE・4 HOURS AGO
The Guardian

Minute-by-minute report: Josh Sargent scored one of the goals of the season – if not the goal of the season – as Dean Smith’s team swept aside their relegation rivals. Scott Murray was watching.
PREMIER LEAGUE・3 HOURS AGO
The Independent

Aston Villa boss Steven Gerrard believes Rafa Benitez’s failed appointment at Everton was unique and warned his men to expect a backlash.Everton sacked Benitez last weekend after less than seven months in charge and will have Duncan Ferguson in caretaker charge when they host Villa on Saturday.Gerrard played under Benitez for six years at Liverpool winning the Champions League in 2005, and was surprised his former boss wanted to manage Everton in the first place.He said: “I’m disappointed for Rafa because I’ve got a relationship with him and an awful lot of respect for him. I have to be...
PREMIER LEAGUE・14 HOURS AGO

Liverpool are through to the Carabao Cup final after beating Arsenal 2-0 on the night and on aggregate.They will face Chelsea at Wembley, after a dominant showing in the semi-final second leg which saw the Gunners end with 10 men after a late Thomas Partey red card.Diogo Jota raced infield to strike home the game’s first goal from the edge of the box midway through the first half, and the Portuguese forward was the star of the show, lobbing in a second to send the Reds clear.Partey had been on the pitch fewer than 20 minutes when he picked up...
PREMIER LEAGUE・1 DAY AGO
The Independent

Ralf Rangnick stood by his decision to substitute Cristiano Ronaldo despite the striker’s angry reaction during Manchester United’s 3-1 win at Brentford.Goals from Anthony Elanga, Mason Greenwood and Marcus Rashford boosted Manchester United’s top-four ambitions.But the spotlight was once again on Ronaldo, who was far from impressed when his number came up with 20 minutes left.The striker trudged off slowly before hurling his coat to the floor as he sat down muttering “why?”.However, United interim boss Rangnick said: “He was asking ‘why me’?. But I told him I take the decisions in the interest of the team.“We were 2-0 up...
PREMIER LEAGUE・1 DAY AGO
The Independent

Saturday, 3pm matches don’t always feature teams in the spotlight, those creating the biggest stories, so it’s a change of pace this weekend. Newcastle - and all the money and mayhem that comes with them right now - are in action at the same time as Manchester United host West Ham, both those sides fighting it out for a Champions League or Europa League spot.And so are Wolverhampton Wanderers.Bruno Lage’s side haven’t yet taken too much focus in the wider Premier League picture, but perhaps they are about to. They have won only one fewer than Man United, lost only...
PREMIER LEAGUE・19 HOURS AGO
The Independent

What the papers sayCristiano Ronaldo could be set to leave Manchester United after just one season back at Old Trafford. The Sun reports Ronaldo’s representatives have told the club that failure to qualify for next season’s Champions League would prompt the 36-year-old to look for an exit.The same paper writes that Tottenham defender Japhet Tanganga is a target for AC Milan. Spurs would reportedly be willing to sell the 22-year-old for £21million, but the Serie A title challengers are said to prefer a loan deal.Arsenal have received a loan offer for former captain Pierre-Emerick Aubameyang from Saudi Arabian team Al-Nassr,...
PREMIER LEAGUE・1 DAY AGO
The Independent

Manchester United look set to be without Aaron Wan-Bissaka until after the upcoming international break due to illness.The defender missed Saturday’s 2-2 draw with Aston Villa and United interim boss Ralf Rangnick revealed he was also ruled out of Wednesday’s match at Brentford and would likely be unavailable for the home clash with West Ham three days later.Asked if Wan-Bissaka would be fit to face Brentford, Rangnick told MUTV: “No, not yet. He’s still ill, I’m afraid. He will not be available for the game (on Wednesday) and also probably not available for the West Ham game.“Hopefully, after the international break, he will be back for training.”After the break that follows the West Ham fixture, United are scheduled to be back in action on February 4 with an FA Cup tie at home to Middlesbrough.
SOCCER・2 DAYS AGO
The Independent

Liverpool assistant manager Pep Lijnders believes many were ready to write the Reds’ Carabao Cup hopes off after last week’s goalless draw with Arsenal but he is backing his side to triumph in the semi-final’s second leg on Thursday night.Arsenal played for more than hour with 10 men at Anfield after the early dismissal of Granit Xhaka but nevertheless held Liverpool to a rare blank, and Mikel Arteta’s side will now hope to capitalise on home advantage in the second leg.Lijnders sensed a mood of pessimism around Anfield after the first match, but insisted he had been looking forward to...
PREMIER LEAGUE・2 DAYS AGO
San Diego Union-Tribune

Tottenham Hotspur visit Leicester City tonight in a rescheduled Premier League match as both sides look to catch up on postponed fixtures. Both Spurs and Leicester have had four games called off this season, including this past weekend, and therefore have several matches in hand on the teams above them in the table. FOLLOW LIVE: Team news and all the action as Brentford host Manchester UnitedAntonio Conte’s Spurs sit four points off West Ham and the Champions League places, having played four games less than the Hammers, and would boost their top four bid with a victory tonight. Leicester, meanwhile,...
PREMIER LEAGUE・2 DAYS AGO
San Diego Union-Tribune

Steven Bergwijn was delighted to follow Antonio Conte’s instructions and deliver a dramatic stoppage-time win for Tottenham at Leicester.The Netherlands international scored twice in 79 seconds of time added on to turn Spurs’ 2-1 deficit into a memorable 3-2 victory.He was sent on in the 78th minute, two minutes after James Maddison had put the Foxes on course for the three points in their first Premier League game of 2022 with a clear instruction from Conte – to score.Bergwijn, who has been subject of a bid from Ajax in the January transfer window, duly obliged, firing home from close range...
PREMIER LEAGUE・1 DAY AGO