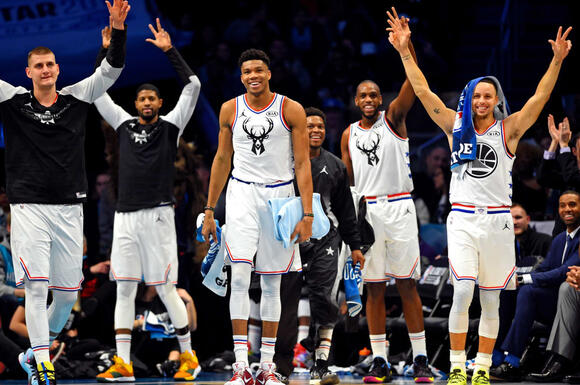 Nikola Jokic was drafted in the 2014 NBA Draft by the Denver Nuggets, and the Milwaukee Bucks passed on him. If they had drafted him, they would have been able to pair Jokic and Giannis Antetokounmpo.

The last three years the NBA's MVP Award has been won by two players named Giannis Antetokounmpo and Nikola Jokic.

The Bucks could have drafted Antetokounmpo and Jokic in back-to-back seasons.

How is it possible?

Antetokounmpo was a lesser known prospect out of Greece, and was the 15th overall pick by the Bucks in 2013.

Jokic was an even more unknown prospect and was the 41st overall pick in 2014 to the Nuggets.

The Bucks drafted Johnny O'Bryant with the 36th overall pick just a few picks earlier when Jokic was still on the board.

If they had been able to pair the two, they would have had arguably the greatest front-court in NBA history.

The only argument that they wouldn't have been is for the possibility that maybe if they had been on the same team they would not have been develop into MVP's because they would have to share the spotlight and the ball.

Even so, everything appears to be working out for the Bucks, because Antetokounmpo led them to the 2021 NBA Championship and he won the Finals MVP.

As for the Nuggets, they go down as making one of the best selections ever in an NBA Draft.

He is the only MVP to ever be drafted that low in NBA history.

With the 2021-22 NBA season in full swing, basketball fans are putting on their jerseys and filling up arenas around
NBA・2 DAYS AGO
San Diego Union-Tribune

Khris Middleton scored 34 points and Jrue Holiday added 26 to lead the Milwaukee Bucks to a 133-127 victory over the Sacramento Kings on Saturday night, making up for the absence of Giannis Antetokounmpo.
NBA・2 DAYS AGO
firstsportz.com

Giannis Antetokounmpo Girlfriend: Who is Mariah Riddlesprigger? Since when have the couple been dating

Giannis Antetokounmpo is the new face of the NBA, his game is just like his nickname the ‘Greek Freak’ he has fearless dunks in his bag which help him to destroy the defense of the opponents. Giannis won his first NBA MVP in 2019 and his first championship in 2021, which have made fans more curious know about his personal life.
FRESNO, CA・6 DAYS AGO
SportsGrid

For the tenth time this season, the Milwaukee Bucks will have to take to the court without their two-time MVP. Eric Nehm confirmed that Giannis Antetokounmpo would remain out against the Sacramento Kings. Nehm also noted that starting shooting guard Grayson Allen is out on Saturday night. The Greek Freak...
NBA・2 DAYS AGO

Milwaukee Bucks guard Jrue Holiday is starting in Saturday's game against the Sacramento Kings. Holiday will return to Milwaukee's starting lineup after Giannis Antetokounmpo was ruled out. In a matchup against a Sacramento unit allowing a 113.4 defensive rating, Holiday's FanDuel salary stands at $7,900. Per Rotogrinders' Court IQ in...
NBA・2 DAYS AGO
firstsportz.com

Giannis Antetokounmpo led one of the most influential campaigns a team has ever witnessed when he inspired the Milwaukee Bucks to the championship in the 2020-21 season. Before that particular win, the Bucks topped the Eastern Conference charts, but were unable to make solid runs in the playoffs. As a result of which, their campaign always flopped until last season. Having said that, the Greek Freak opinionated upon just why he is not the best player in the NBA, at least just yet.
NBA・2 DAYS AGO
wktysports.com

The Milwaukee Bucks are hosting the Sacramento Kings on Saturday night in Wisconsin.
NBA・2 DAYS AGO

Giannis Antetokounmpo is ruled out for the game between the Sacramento Kings and Milwaukee Bucks on Saturday night. View the original article to see embedded media. The Milwaukee Bucks are hosting the Sacramento Kings on Saturday night, and the game comes directly after their win over the Chicago Bulls on Friday night.
NBA・2 DAYS AGO
FastBreak on FanNation

Grayson Allen has been ruled out for the game between the Kings and Bucks on Friday night in Milwaukee.
NBA・2 DAYS AGO
FanSided

Giannis Antetokounmpo is dominating the fourth quarter this season

Without question, Giannis Antetokounmpo has been on a tear to start the 2021-22 NBA season. The Greek Freak has been making a valid case to win his third MVP award with some eye-popping numbers that have helped keep the Milwaukee Bucks in the title-contending conversation. While his all-around production has been incredible, Antetokounmpo’s efforts in the fourth quarter have been particularly fascinating, as he has been a dominant force in the final 12 minutes of games.
NBA・2 HOURS AGO
FastBreak on FanNation

Bucks Starting Lineup Against The Kings

The Milwaukee Bucks have announced their starting lineup for Saturday's game against the Sacramento Kings.
NBA・2 DAYS AGO

The Phoenix Suns are steamrolling the NBA once again. They became the first team to win 30 games this season due to their elite offense and even better defense. It’s not a matter of if, but who on Phoenix’s roster gets named an All-Star. Devin Booker has been...
PHOENIX, AZ・17 DAYS AGO
fadeawayworld.net

Bucks guard Grayson Allen addressed the Flagrant 2 foul he committed on Chicago Bulls guard Alex Caruso with a string of messages in his Discord server Saturday afternoon. "It was very unfortunate how it played out," Allen wrote. "I jumped to block it with my left and as I'm spinning went to grab the ball with my right hand not throw him down. It was a really hard fall and I'm glad he's okay. If I could do the play over again knowing he'd fall like that I wouldn't make the play."
NBA・1 DAY AGO
FastBreak on FanNation

Here's What Steph Curry Said After The Warriors Beat The Jazz

Steph Curry spoke to the media after the Golden State Warriors defeated the Utah Jazz.
NBA・1 DAY AGO
fadeawayworld.net

Vince Carter was a superstar, one of the most entertaining players to ever enter the NBA. His highlight-reel dunks and explosive scoring made him must-watch TV, especially in his early years with the Toronto Raptors. However, another thing that made Carter so impressive was his longevity, he made a league appearance in 4 different decades.
NBA・22 HOURS AGO
fadeawayworld.net

Charles Barkley and Michael Jordan were very close during their playing careers. Jordan and Barkley entered the NBA at the same time, as part of the legendary 1984 NBA Draft class. Jordan went to the Bulls, and Chuck would join the Philadelphia 76ers. But Barkley found more success when he was in the Western Conference.
NBA・1 DAY AGO
FastBreak on FanNation

Los Angeles Lakers legend Kareem Abdul-Jabbar ripped fellow Hall of Famer John Stockton for his comments on the COVID-19 pandemic. Stockton wrongly claimed that 150 athletes have died from taking the COVID-19 vaccine, and Abdul-Jabbar responded in an interview with CNN’s John Berman. “I think statements like that make...
NBA・19 HOURS AGO