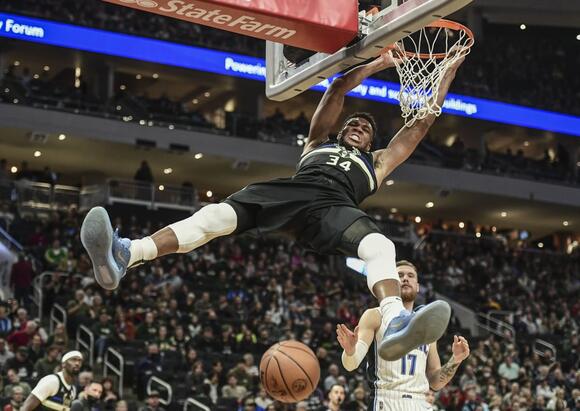 Giannis Antetokounmpo threw down a massive dunk in the Orlando Magic and Milwaukee Bucks game on Saturday.

The Milwaukee Bucks defeated the Orlando Magic 117-108 on Saturday night to improve their record to 9-8 in the first 17 games of the season and get back over .500.

The defending champs have been off to a slow start to the season, and have had players in and out of the lineup.

However, Saturday night they were rolling, and during the game two-time MVP Giannis Antetokounmpo threw down a massive dunk and the highlight can be seen in a clip that is embedded below from the Twitter account of the Bucks.

Antetokounmpo had 32 points, 20 rebound and five assists in the game.

As for the Magic, they had a nice win over the New York Knicks on the road earlier in the week, but have now lost in each of their last two games to the Nets in Brooklyn and the Bucks in Milwaukee and are 4-12 on the season.

Giannis Antetokounmpo had 30 points and 12 rebounds to help the Milwaukee Bucks overcome the ejection of Grayson Allen and beat the Chicago Bulls 94-90.
NBA・2 DAYS AGO
Sportsnaut

With the 2021-22 NBA season in full swing, basketball fans are putting on their jerseys and filling up arenas around
NBA・1 DAY AGO
San Diego Union-Tribune

Khris Middleton scored 34 points and Jrue Holiday added 26 to lead the Milwaukee Bucks to a 133-127 victory over the Sacramento Kings on Saturday night, making up for the absence of Giannis Antetokounmpo.
NBA・1 DAY AGO
Chicago Tribune

The Chicago Bulls came inches from claiming the first round of battles with the Milwaukee Bucks this season, falling short by four points in a 94-90 loss Friday night at Fiserv Forum. It wasn’t the prettiest game for either team — both shot under 20% from 3-point rangein a vintage Midwestern slugfest as the Bucks and Bulls jockey for position at the top of the Eastern Conference. The Bulls ...
NBA・1 DAY AGO

If there is one word to explain the scoring prowess of DeMar DeRozan for the Chicago Bulls, it is exceptional! The veteran guard has been back his best since the beginning of the 2021-22 season. And the team’s latest match added to the claim even more. In their match...
NBA・6 HOURS AGO
Sporting News

If you haven't checked the standings for a while, you'll be quick to notice something familiar about the top of the Eastern Conference. The Milwaukee Bucks are once again among the East's elite after their slow start to the season. NBA League Pass: Sign up to unlock live out-of-market games...
NBA・2 DAYS AGO
FastBreak on FanNation

The Orlando Magic are hosting the Chicago Bulls on Sunday evening in Florida.
NBA・22 HOURS AGO

Giannis Antetokounmpo led one of the most influential campaigns a team has ever witnessed when he inspired the Milwaukee Bucks to the championship in the 2020-21 season. Before that particular win, the Bucks topped the Eastern Conference charts, but were unable to make solid runs in the playoffs. As a result of which, their campaign always flopped until last season. Having said that, the Greek Freak opinionated upon just why he is not the best player in the NBA, at least just yet.
NBA・1 DAY AGO
FastBreak on FanNation

Grayson Allen has been ruled out for the game between the Kings and Bucks on Friday night in Milwaukee.
NBA・1 DAY AGO
FastBreak on FanNation

Zach LaVine has been ruled out for the game between the Chicago Bulls and Orlando Magic on Sunday.
NBA・1 DAY AGO
charlottenews.net

The wife of NBA legend Steph Curry has called the gossip 'ridiculous'. The wife of Golden State Warriors star Steph Curry, Ayesha, has addressed rumors that the couple is in an open relationship, labeling the speculation 'disrespectful'. Claims circled on gossip blogs in recent weeks and cited an anonymous tip...
CHARLOTTE, NC・13 DAYS AGO

Grayson Allen got ejected during the game between the Chicago Bulls and Milwaukee Bucks for a flagrant foul on Alex Caruso.
NBA・2 DAYS AGO
FastBreak on FanNation

The Golden State Warriors beat the Houston Rockets on a buzzer beater from Steph Curry, and after the game Curry spoke to the media.
NBA・2 DAYS AGO
Larry Brown Sports

Russell Westbrook and LeBron James trying to play basketball together has gone even worse than Johnny Lawrence and Daniel LaRusso trying to teach karate together. Now one of Westbrook’s former teammates is putting the onus on James to fix it. Ex-NBA guard Anthony Morrow appeared Friday on SiriusXM NBA...
NBA・2 DAYS AGO

The Lakers are desperate for help. It appears it’s on the way in the form of none other than Anthony Davis. Davis has been upgraded to questionable and has a chance to play when the Lakers battle the Miami Heat on Sunday. AD is officially a game-time decision. Davis,...
NBA・1 DAY AGO
Sportsnaut

The Phoenix Suns are steamrolling the NBA once again. They became the first team to win 30 games this season due to their elite offense and even better defense. It’s not a matter of if, but who on Phoenix’s roster gets named an All-Star. Devin Booker has been...
PHOENIX, AZ・16 DAYS AGO