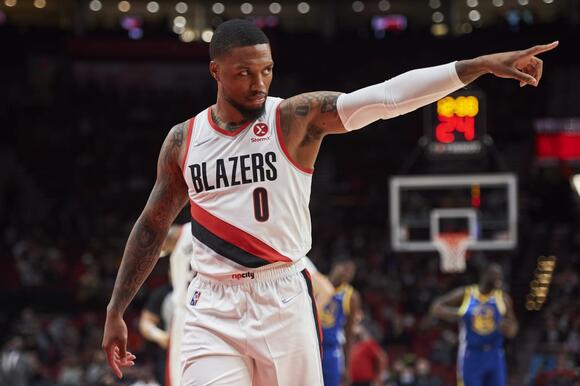 Damian Lillard will be available for the Trail Blazers in their game against the Philadelphia 76ers.

The Portland Trail Blazers will have Damian Lillard when they face the Philadelphia 76ers in Oregon on Saturday evening.

The All-Star point guard had been questionable with an abdominal injury, but will be active and play in the game.

Coming into the game, the Trail Blazers have had a slow start to the 2021-22 NBA season.

Sure, they are .500 with an 8-8 record through the first 16 games, but they do not look anything close to a contender in a deep Western Conference.

After losing in the first round of the playoffs in each of the last two seasons, this year will be a pivotal one for the franchise going forward.

More on the Philadelphia 76ers can be read here.

The Washington Wizards are hosting the Portland Trail Blazers on Saturday night.
NBA・2 DAYS AGO
Sportsnaut

Jusuf Nurkic had 21 points and a season-high 22 rebounds, CJ McCollum scored 16 points in a successful return to
NBA・14 HOURS AGO
ClutchPoints

Detroit Pistons legend Isiah Thomas recently speculated about what it would be like if star players from today’s NBA were inserted into the league in the 1980s and 1990s. Thomas explained that players like Los Angeles Lakers superstar LeBron James and Brooklyn Nets superstar Kevin Durant would pose massive issues for anyone hoping to stop them in that era.
NBA・2 DAYS AGO

The Brooklyn Nets have barely had their “Big Three” on the floor together since they assembled what they thought would be a championship roster, and one of their superstar players is reportedly open to the idea of moving on. NBA reporter Marc Stein wrote on Monday that sources...
NBA・17 HOURS AGO
FastBreak on FanNation

James Harden of the Brooklyn Nets sent out a tweet on Sunday.
NBA・22 HOURS AGO
FastBreak on FanNation

The Brooklyn Nets lost to the Cleveland Cavaliers on Monday afternoon in Ohio.
NBA・18 HOURS AGO
FastBreak on FanNation

Steph Curry has been ruled out for Sunday's game between the Golden State Warriors and Minnesota Timberwolves.
NBA・2 DAYS AGO

The Los Angeles Lakers were a hot destination in free agency. Over the summer, multiple players flocked to the team to chase a title alongside LeBron James in the NBA's biggest market. But since the start of the season, things have been less than ideal for the Lakeshow. Through the...
NBA・2 DAYS AGO
FastBreak on FanNation

Kevin Durant injured his knee during the game between the New Orleans Pelicans and Brooklyn Nets.
NBA・2 DAYS AGO
FastBreak on FanNation

Kyle Kuzma threw down a huge dunk on Joel Embiid during the game between the Philadelphia 76ers and Washington Wizards on Monday afternoon.
NBA・20 HOURS AGO
FastBreak on FanNation

Rajon Rondo has been ruled out for the game between the Cleveland Cavaliers and Oklahoma City Thunder on Saturday night.
NBA・2 DAYS AGO

James Harden and the Brooklyn Nets defeated the New Orleans Pelicans on Saturday evening at Barclays Center.
NBA・2 DAYS AGO
FastBreak on FanNation

Ja Morant and the Memphis Grizzlies defeated the Chicago Bulls on Monday afternoon.
NBA・17 HOURS AGO
FastBreak on FanNation

Cade Cunningham was ejected during the game between the Phoenix Suns and Detroit Pistons on Sunday afternoon in Michigan.
NBA・1 DAY AGO
Sportsnaut

Alex Caruso is ruled out for the game between the Chicago Bulls and Memphis Grizzlies on Monday afternoon in Tennessee.
NBA・1 DAY AGO
Chicago Tribune

DeMar DeRozan seemed poised for another miracle with the final handful of seconds ticking off the clock in Boston on Saturday night. DeRozan already had scored 14 points in the fourth quarter to lead a short-handed Chicago Bulls team within punching distance of the Celtics. He already had dished a pass to Nikola Vučević for a wide-open 3-pointer to take the lead, then launched himself inside ...
NBA・2 DAYS AGO
FastBreak on FanNation

Kevin Durant injured his knee during the game between the New Orleans Pelicans and Brooklyn Nets.
NBA・2 DAYS AGO
FastBreak on FanNation

Bulls Starting Lineup Against The Celtics

The Chicago Bulls have announced their starting lineup for Saturday's game against the Boston Celtics.
NBA・2 DAYS AGO