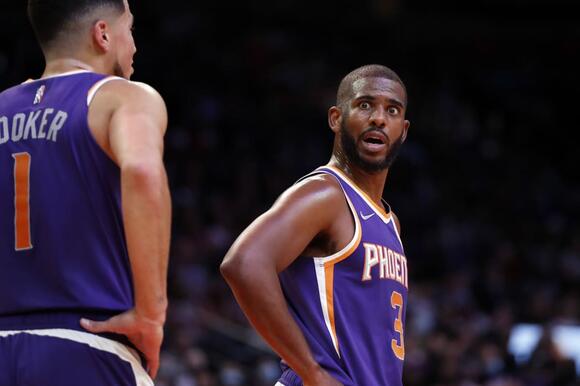 Chris Paul and the Phoenix Suns defeated the Dallas Mavericks on Friday night.

The Phoenix Suns made the NBA Finals last season, and lost to the Milwaukee Bucks in six games.

This season, they got off to a slow start at 1-3 in their first four games.

However, they are now on fire with an 11-game winning streak, and have a 12-3 record in their first 15 games after beating the Dallas Mavericks 112-104 on Friday night in Arizona.

On Saturday, All-Star point guard Chris Paul posted photos to his Instagram and his post can be seen embedded below.

Paul had 18 points, five rebounds and 14 assists in the game.

Over on the Mavericks side, Kristaps Porzingis led the way with 23 points and 12 rebounds.

More on the Dallas Mavericks can be read here.

Devin Booker, Chris Paul and the Phoenix Suns are in Dallas to play the Mavericks.
NBA・1 DAY AGO
Sportsnaut

NBA power rankings: Now that the NBA season is in full swing, it’s time to rank all 30 teams. With
NBA・2 DAYS AGO
Sportsnaut

The Phoenix Suns look to complete a perfect five-game road trip when they visit the Dallas Mavericks on Thursday night.
NBA・1 DAY AGO
Sportsnaut

The Washington Wizards have one of the more unique rosters in the NBA. That’s a result of them having a
NBA・1 DAY AGO

First-place Phoenix travels to take on a surging Dallas team and Indiana draws Golden State on the second night of a back-to-back.
NBA・1 DAY AGO
Sportsnaut

Luka Doncic scored a season-best 41 points and made a crucial 3-pointer with 1:01 to play as the Dallas Mavericks
NBA・1 DAY AGO
Sportsnaut

Keifer Sykes, getting an extended opportunity with Indiana’s starting backcourt out of action, contributed five points to a 10-0 burst
NBA・19 HOURS AGO

DALLAS (AP) — Devin Booker scored 28 points, Chris Paul had 20 points and 11 assists, and the Phoenix Suns rallied late to beat the Dallas Mavericks 109-101. In a matchup of two of the NBA’s hottest teams, Phoenix finished a sweep of its season-high, five-game road trip and won its ninth straight against the Mavericks. Luka Doncic scored 28 points, Jalen Brunson added 19 and Kristaps Porzingis had 18 points and 11 rebounds for the Mavericks, who finished a home back-to-back and had a four-game winning streak snapped.
NBA・22 HOURS AGO
Yardbarker

Deandre Ayton has been ruled out for Thursday's game between the Phoenix Suns and Dallas Mavericks in Texas. View the original article to see embedded media. The Phoenix Suns will be in Texas on Thursday evening to take on the Dallas Mavericks, and for the game they will be without one of their best players.
NBA・1 DAY AGO
ClutchPoints

Luka Doncic played through an injury on Thursday night as the Dallas Mavericks fell to the Phoenix Suns in a thrilling encounter, 109-101. After the game, Doncic himself provided an update on his most recent neck injury and unfortunately, it appears could prove worrisome for Mavs fans. Doncic admitted that...
NBA・21 HOURS AGO

The Phoenix Suns are in Dallas to play the Mavericks on Thursday night.
NBA・1 DAY AGO
USA TODAY

Luka Doncic has many of the same flaws as Russell Westbrook but gets far less criticism. He may not be able to outrun it much longer.
NBA・4 HOURS AGO
ClutchPoints

Dallas Mavericks star Luka Doncic was having a strong showing against the Phoenix Suns on Thursday night. Until he hurt his neck in the waning moments of the third quarter. They ended up losing a close one at home, 109-101. Doncic finished with 28 points but was looked uncomfortable in...
NBA・20 HOURS AGO
Sportsnaut

Fresh off a statement victory and with a perfect five-game road trip behind them, the Phoenix Suns might want to
NBA・5 HOURS AGO

The Golden State Warriors are hosting the Detroit Pistons on Tuesday evening, and the Warriors shared an awesome photo of Klay Thompson and Steph Curry.
NBA・2 DAYS AGO
The Spun

Changes are coming for the Memphis men’s basketball team. On Wednesday, head coach Penny Hardaway announced that Rasheed Wallace’s role with the team has been altered. Wallace, who agreed to become an assistant coach at Memphis back in August, will serve as a consultant for the time being. His in-person duties have been taken away from him – for now.
MEMPHIS, TN・2 DAYS AGO
Lakers Nation