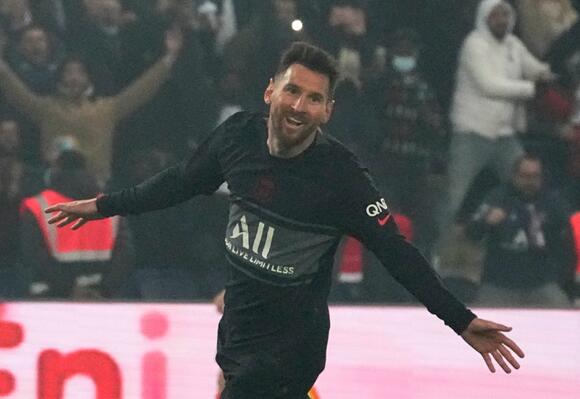 Lionel Messi came to the rescue for 10-man Paris St Germain as they strengthened their grip at the top of Ligue 1 with a 3-1 win over Nantes.

Messi’s first league goal for PSG and his deflected strike for a Dennis Appiah own-goal, dug his side out of a hole after goalkeeper Keylor Navas was sent off with 25 minutes remaining.

Randal Kolo Muani had hauled Nantes level in the 76th minute after Kylian Mbappe’s early opener for the hosts.

Elsewhere in France, Rennes ran out comfortable 2-0 winners at home to Montpellier.

In LaLiga, Xavi Hernandez got a win in his first match as Barcelona head coach in the derby against Espanyol.

A penalty from Memphis Depay three minutes into the second half secured a narrow 1-0 victory for the hosts.

Leaders Sevilla were held 2-2 at home to Alaves while Celta Vigo and Villarreal drew 1-1 and a late Felipe goal gave Atletico Madrid a 1-0 win over Osasuna.

Two goals in six minutes from Zlatan Ibrahimovic could not prevent AC Milan from losing their unbeaten Serie A record in a 4-3 defeat at Fiorentina.

Milan were 3-0 down through goals from Alfred Duncan, Riccardo Saponara  and Dusan Vlahovic before Ibrahimovic made a game of it.

But Vlahovic struck again five minutes from time before an injury-time own-goal from Fiorentina’s Lorenzo Venuti.

A pair of penalties from Leonardo Bonucci gave Juventus a 2-0 win at Lazio and Mario Pasalic scored twice to help Atalanta to a thumping 5-2 victory over Spezia.

Borussia Dortmund captain Marco Reus scored an 85th-minute winner to give his team a 2-1 victory over Stuttgart and close to within a point of Bundesliga leaders Bayern Munich.

Bayer Leverkusen picked up their first win since early October as Amine Adli’s header secured a 1-0 win at home to Bochum.

Diadie Samassekou scored his first Bundesliga goal to help Hoffenheim to a 2-0 win over RB Leipzig, with Munas Dabbur adding the second.

The legendary Argentine, who has a number of goal scoring records to his name, has made a habit of tormenting defenders across a remarkable career. Lionel Messi has sent records tumbling across a stunning career at the very highest level, with an iconic spell for the Argentine at La Liga giants Barcelona now being followed by a stint at Ligue 1 heavyweights Paris Saint-Germain.
MLS・19 HOURS AGO
The Independent

Serie A leaders Inter Milan march on with draw against Atalanta

Inter Milan extended their lead at the top of Serie A with a 0-0 draw at Atalanta.The Nerazzurri have lost only once in the league this season but were grateful to goalkeeper Samir Handanovic for making fine saves to deny Luis Muriel and Mario Pasalic in Bergamo.Leaders Inter are now two points clear of city rivals AC Milan while fourth-placed Atalanta are eight points off the top.Portugal midfielder Sergio Oliveira scored the winner on his debut as Roma beat Cagliari 1-0.The Porto loanee netted a 33rd-minute penalty for Jose Mourinho’s side after Dalbert had handled his shot.Antonin Barak bagged...
UEFA・6 HOURS AGO

LIONEL MESSI could make a dramatic transfer return to Barcelona because his wife is 'not enjoying life in France', according to sensational reports. The Argentine superstar, 34, only left the Nou Camp amid the club's financial disarray last summer. But halfway through his debut season with Paris Saint-Germain, there is...
SOCCER・13 HOURS AGO
CBS Sports

Lionel Messi to miss PSG match against Brest and return to training next week, Neymar recovery 'on track'

Paris Saint-Germain have confirmed that Lionel Messi will miss Saturday's Ligue 1 fixture with Stade Brestois 29 as he continues to recover from his recent positive test for COVID-19. The Argentina international is back in Paris, as is teammate Neymar, but has not yet been able to return to match...
SOCCER・2 DAYS AGO
The Guardian

Ralf Rangnick has no plans to replace Harry Maguire as Manchester United captain, despite Cristiano Ronaldo’s claim that the squad's mentality must improve to avoid a "nightmare" season.In an interview with television broadcasters this week, Ronaldo said that there needed to be a shift in attitude within the Old Trafford dressing room in order for results to improve.The five-time Ballon d'Or winner rejoined United from Juventus in August, having won eight major honours during his first spell at the club between 2003 and 2009, including three Premier League titles and the Champions League.Ronaldo has returned as the oldest outfield player...
PREMIER LEAGUE・2 DAYS AGO
The Guardian

Arsenal have submitted a formal request to the Premier League asking to postpone their north London derby fixture against Tottenham on Sunday. Mikel Arteta’s side are suffering from several absences due to a Covid outbreak, injuries and players being away on international duty at the Africa Cup of Nations. The Premier League confirmed the request had been lodged in a statement released on Friday evening and said they will take a final decision on Saturday.“The Premier League has received a postponement request from Arsenal FC relating to their away match against Tottenham Hotspur, due to be played at 4.30pm...
PREMIER LEAGUE・2 DAYS AGO
The Independent

Manchester City increased their lead at the top of the Premier League table to 13 points as Kevin De Bruyne’s strike earned the defending champions a 1-0 win over second-placed Chelsea. City dominated possession in the first half but Jack Grealish was denied an opening goal when Kepa Arrizabalaga blocked his shot with an outstretched leg. Romelu Lukaku went close after the break but saw a curling effort saved by Ederson. The hosts took the lead in the 70th minute when De Bruyne curled in an excellent strike past Kepa from outside of the box, Chelsea continued to struggle to...
PREMIER LEAGUE・1 DAY AGO
The Guardian

Who crossed a borden? Who signed on? Who went low?
PREMIER LEAGUE・2 DAYS AGO