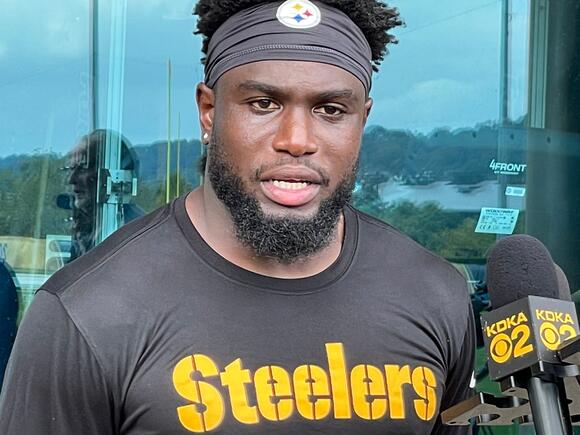 PITTSBURGH (93.7 The Fan) – Before flying to California, the Steelers made a couple of roster moves. Chief among them officially activating quarterback Ben Roethlisberger from the Reserve/COVID list.

Also called up from the practice squad-defensive lineman Daniel Archibong and linebacker Delontae Scott.  The former Temple starter, Archibong, picked up after his release by the Bears just before the season started.  The 6’6”, 300-pounder  played in 41 games in college with 5.5 sacks and 10 tackles for loss.

Scott is a former defensive end out of SMU.  The 6’5”, 250-pound Scott added to the practice squad after he was waived by the Packers on cut-down day.  Scott had 17 sacks and 35 tackles for loss at SMU, 17 TFL as a senior.

Neither has played in a NFL game.

Steelers also placed guard Kevin Dotson on Reserve/Injured List with an ankle injury sustained last week.  Dotson had started every game this year at left guard and 13 games in his two-year career.

Steelers play at the Chargers Sunday night at 8:20p.

Aaron Rodgers was noncommittal about his playing future in the aftermath of the Packers’ playoff loss, except to say he doesn’t want to be part of a rebuild. Are the Steelers rebuilding?
NFL・15 HOURS AGO
Sports Illustrated

The Atlanta Falcons look for help on the offensive line with former Pittsburgh Steelers, Chicago Bears starter Rashaad Coward. Julio Jones struggled in his first season away from the Atlanta Falcons. 13 hours ago. 13 hours ago. Gono signed a one-year $3.4 million contract with the Falcons prior to the...
NFL・12 HOURS AGO
Sportsnaut

Brown covered a lot of ground, posting a meme critical of three teams at once.
NFL・13 HOURS AGO
steelersnow.com

The Pittsburgh Steelers will receive a fourth-round compensatory draft pick in the 2022 NFL Draft to offset the loss of free agent linebacker Bud Dupree, according to a projection by Over the Cap. The Steelers lost Bud Dupree to the Tennessee Titans last March, one of three countable free agent...
NFL・13 HOURS AGO
ClutchPoints

The Pittsburgh Steelers are already making moves, but it’s not concerning their quarterback void as Ben Roethlisberger won’t return next season. The Steelers, however, appear to be already shoring up on other positions after signing a controversial wide receiver, who perhaps is mostly remembered recently for throwing a punch.
NFL・5 HOURS AGO
93.7 The Fan

Ratings for NFL games continue to be strong for the most part, but even with the Steelers making it to the postseason for the second straight year, numbers were down locally. Rating in Pittsburgh fell 10 percent compared to 2020.
NFL・13 HOURS AGO

The chances that Aaron Rodgers finds himself in Black and Gold next season are pretty good. After the Denver Broncos, the Steelers are considered the 2nd favorite team to acquire the MVP quarterback, according to BetOnline.ag.
NFL・13 HOURS AGO
The Spun

The Kansas City Chiefs beat the Buffalo Bills, 42-36, in overtime at Arrowhead Stadium on Sunday evening. The game was a wild one, with several lead changes in the game’s final two minutes. Ultimately, the Chiefs were able to force overtime, before scoring the game-winning touchdown on a pass from Patrick Mahomes to Travis Kelce.
NFL・1 DAY AGO
The Spun

The Tampa Bay Buccaneers have cut a veteran running back to open up a roster spot ahead of Sunday’s Divisional Round game. The Bucs advanced to the Divisional Round this weekend by beating the Eagles last Sunday afternoon. Now, they have a date with the Los Angeles Rams, who may have had the most dominant playoff performance of the Wild Card round.
NFL・2 DAYS AGO
Audacy

Sean Payton has reportedly not yet committed to returning to the Saints next season while Troy Aikman could be leaving FOX for Amazon, leaving an opening that could put the Saints coach in the booth.
NFL・1 DAY AGO

Having Sunday Night Football in the early afternoon may feel unfamiliar to most NFL fans. But one familiar thing is Cris Collinsworth and his color commentary that they all seem to despise. Collinsworth and Al Michaels have the call for today’s big Rams-Bucs game in the Divisional Round. The winner...
NFL・1 DAY AGO
Sportsnaut

Despite quitting on his team in the middle of a game, if there’s one thing Antonio Brown has made clear,
NFL・2 DAYS AGO
Sportsnaut

NFL picks against the spread. NFL Championship Sunday edition. And then there were four. With three road teams winning on
NFL・1 DAY AGO
Falcon Report