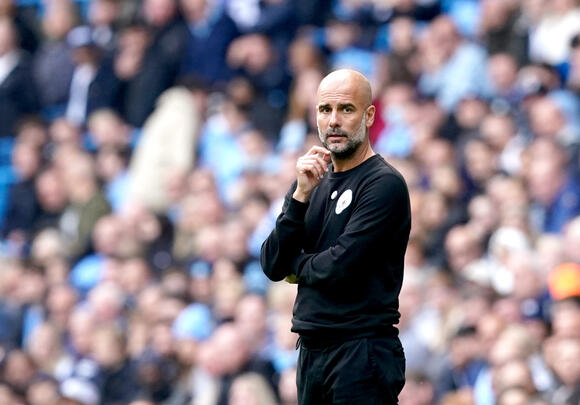 Pep Guardiola has made his name as arguably the best coach in world football after what has been a trophy-laden spell at the Etihad Stadium, where he has led Manchester City to three league titles amongst other domestic silverware.

The likes of Kevin De Bruyne, Leroy Sane and Vincent Kompany have spoken about the Catalan's attention to detail in the past - a culture that has helped plenty of City stars fulfil their potential under the 50-year-old's stewardship.

Guardiola is also widely known for his work-ethic since his Barcelona days, where he assembled what is, to this day, believed to be the best domestic side in the history of the game.

And during a period where Jurgen Klopp and Thomas Tuchel have earned praise for their sides' showings, Guardiola has often come under criticism - largely down to Manchester City's repeated shortcomings on the European front.

Though Guardiola is yet to help City break their Champions League duck, he sent a timely reminder of his football acumen last term, as his false-nine system was the building block of City's title charge.

The Premier League champions, who suffered a 1-0 defeat to Leicester City in the Community Shield in August, have already been knocked out of the Carabao Cup on penalties by West Ham.

However, despite making a sluggish start to the campaign, the Sky Blues have been in fine form in recent months, rising to second place in the league table whilst taking a significant step towards sealing a place in the knock-out stages of the Champions League.

Ahead of his side's league clash against Everton on Sunday, Pep Guardiola said, in an interview with Expo 2020 Dubai: “I’m not a genius," as quoted by Sporf.

"I’m a guy who works the most incredibly (hard) in the world, I’m there. In that I’m good. I spend a lot of time here, there. I try to be the first to arrive and the last to leave, no secrets."

The Spaniard's words saw a host of City fans take to social media, as club supporters heaped praise on Guardiola for his honesty and simplicity. Here's a selection of the best replies on City Xtra's Twitter page-

After Sergio Aguero bid farewell to the club, the failed pursuit of Tottenham's Harry Kane, and Ferran Torres’ move to Barcelona this month, things haven’t been looking rosy on the striker front for Manchester City this season. However, the reported signing of one of South America’s most highly-rated...
PREMIER LEAGUE・2 DAYS AGO
CityXtra

Morgan Rogers has had a rough time of things during his loan spell at Bournemouth. Making a single start in 15 Championship games, it is safe to say that the move has failed to work out so far for the 19-year-old. After showing encouraging signs during his loan stint at...
SOCCER・4 HOURS AGO
CityXtra

Despite James McAtee only making a single appearance this season, in a cameo off the bench against Everton in the Premier League, the Manchester City youth product already has a high-profile list of fans. Meanwhile, former Welsh international and current radio and TV pundit Robbie Savage singled out the 19-year...
PREMIER LEAGUE・6 HOURS AGO

A comprehensive round-up of all the latest Manchester City transfer news and gossip from across the globe, as we enter the final week of the January transfer window. Swansea, QPR, and Rangers have all made approaches to sign James McAtee on loan, with the Manchester City midfielder in demand among a host of clubs eager to secure his services for the remainder of the season. (James Ducker/Telegraph)
PREMIER LEAGUE・2 HOURS AGO
CityXtra

With 13 years gone by since the Abu Dhabi takeover in the east side of Manchester, Manchester City have firmly established their status as a dominant force in English football after what has been a phenomenal period on and off the pitch for the Sky Blues since 2008. Having seen...
PREMIER LEAGUE・1 DAY AGO

Over the course of the past few years, Manchester City and the City Football Academy as a whole have firmly solidified a reputation for having a keen eye for spotting quality youth talent from both the local region and all corners of the globe. Nurturing the potential of Phil Foden...
PREMIER LEAGUE・2 DAYS AGO
CityXtra

Ever since the Abu Dhabi Group's takeover of Manchester City in 2008, the ultimate goal has been to lift the Champions League trophy. By appointing Ferran Soriano and Txiki Begiristain, the hierarchy put everything in place to ensure the appointment of Pep Guardiola as manager - one of the sports' serial winners.
UEFA・4 HOURS AGO
CityXtra

Manchester City’s title win in the 2011/12 season is regarded as one of, if not the most iconic title win in Premier League history. The Sky Blues' league triumph on goal difference with their fate alongside cross-town rivals Manchester United’s being decided on the final day is already an incredible story - surely the most dramatic end to a Premier League title race ever.
PREMIER LEAGUE・5 HOURS AGO
CityXtra

Pep Guardiola’s trophy-laden spell at Manchester City has ensured that he is right up there amongst the greatest managers in Premier League history, having won a plethora of domestic trophies since his arrival to the Etihad Stadium in 2016. There is an argument to suggest that the Catalan's Manchester...
PREMIER LEAGUE・1 DAY AGO

There is no denying the fact that James McAtee is right among the best English talent pool of up-and-coming young players after emerging through the academy ranks at the Etihad Stadium into the first-team squad. With 14 goals and four assists to his name in 17 Premier League 2 appearances...
PREMIER LEAGUE・5 HOURS AGO
CityXtra

James McAtee is the cream of the crop from a prodigious group of youngsters that have come up through the ranks at the brilliant Manchester City academy across the past few months. Pep Guardiola is certainly not a manager who hands out freebies in the form of first-team appearances, and...
PREMIER LEAGUE・6 HOURS AGO
CityXtra

The Manchester City defender was dismissed with eight minutes remaining in the club's 2-1 defeat to RB Leipzig in Germany, on matchday six of their Champions League group stage campaign in December. Speaking during a recent interview on the subject of his dismissal against the Bundesliga side, Kyle Walker said,...
UEFA・6 HOURS AGO
CityXtra

It’s fair to say that Manchester City have been in a league of their own so far this season. Sitting nine points clear at the top of the Premier League table and only recently seeing an end to their incredible 12-game winning streak, Manchester City have swatted past teams without the presence of a natural striker.
PREMIER LEAGUE・1 DAY AGO
StyleCaster

As one of the best soccer players in the world, it only makes sense that Neymar’s net worth reflects his status in the game. Today, the professional footballer’s salary puts him among the highest-paid athletes around the globe—but how much is Neymar worth, exactly? Neymar, whose full name is Neymar da Silva Santos Junior, was born on February 5, 1992, in Mogi das Cruzes, Brazil. His father, Neymar Santos Sr., is a former footballer himself who quickly became his son’s mentor after witnessing his budding potential for the sport. From a young age, Neymar Jr. was coached in soccer. At the...
FIFA・2 DAYS AGO
CityXtra

Ever since Luka Ilic signed for Manchester City, the youngster has been identified as one to watch for the future, and tipped to emulate the success seen within the game from his brother in Serie A. However, the Serbian midfielder's career up until now has been defined by a series...
PREMIER LEAGUE・2 DAYS AGO
CityXtra

Pep Guardiola's domination of English football came as no surprise to anyone associated with Manchester City. His relentless pursuit of perfection has captured the Blues three Premier League titles, one FA Cup, four Carabao Cup's, and a club-first Champions League final - narrowly losing out to Chelsea in Porto. However,...
PREMIER LEAGUE・1 HOUR AGO