The extent of the meltdown at Manchester United has been laid bare, after fans took to booing an apologising Ole Gunnar Solskjaer and the players following a humiliating 4-1 defeat to Watford.

United failed to get over their slump as Premier League football returned from the international break, and were taken apart by Claudio Ranieri's men.

Ole Gunnar Solskjaer cut a miserable, forlorn figure at the final whistle and quickly hurried over to the away end to apologise to the travelling fans. 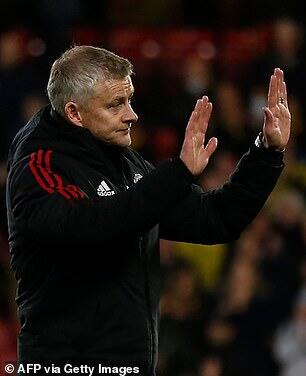 Cameras honed in on Solskjaer as he was surrounded by some of his key men, who could be seen applauding the away end.

Yet a chorus of boos began to raise in decibels as Solskjaer stepped forward, provoking an angry Bruno Fernandes to gesticulate wildly and wag his finger at the away end.

The Portuguese star then appeared to be signalling to the United fans that their frustration should be directed at the whole team, not just the apologising manager.

Solskjaer looped round in front of the fans raising his hands in apologetic fashion, before turning and making his way towards the tunnel.

Watford had taken a 2-0 lead in the match courtesy of early goals from Josh King and Ismaila Sarr, before United's forgotten man Donny van de Beek managed to claw a goal back.

United struggled to cope with the pressure which followed, with a collapse soon beckoning after captain Harry Maguire received a second yellow card on 69minutes and was given his marching orders.

From there, United looked lost at sea. Late injury time goals from youngster Joao Pedro and Emmanuel Dennis rubbed salt into the wound, inflicting yet another big defeat upon the Red Devils.

Speaking after the match goalkeeper David de Gea fronted up and insisted the performance his side had put in was simply embarrassing.

'There's not much to say - it was embarrassing to see Man United play like we did today,' De Gea said.

'It's not acceptable - the way we were playing and doing things. It's easy to blame the manager or the staff but sometimes it's the players. We need to show much more than we are doing.

'Embarrassing first half - we could've conceded four goals in 45 minutes. It was hard to watch the team playing today - it was nightmare after nightmare. It's not acceptable.

'We are trying to give our best and fight for the team but for sure something is very wrong. You can see in the games - it's very low level, very poor. Sorry to the fans, once again.

London (AFP) – Bruno Fernandes has urged Manchester United to learn from their frustrating collapse in a damaging 2-2 draw against Aston Villa. Fernandes had put Ralf Rangnick’s side on course for victory with two goals at Villa Park on Saturday. The Portugal star, serving as United’s stand-in...
PREMIER LEAGUE・1 DAY AGO
fourfourtwo.com

Frustrated Bruno Fernandes says lessons have to be learned after Manchester United let victory “escape at the end” against Aston Villa. Having edged past Steven Gerrard’s side in the FA Cup third round on Monday, Ralf Rangnick’s Red Devils were on course for an important Premier League win at Villa Park on Saturday evening.
PREMIER LEAGUE・1 DAY AGO
punditarena.com

Bruno Fernandes contract talks on hold. Bruno Fernandes has put contract talks with Manchester United on hold as he waits to see what the club’s situation will be next season. The Portuguese midfielder scored a brace in a 2-2 draw with Aston Villa on Saturday, a game in which...
PREMIER LEAGUE・18 HOURS AGO
Tribal Football

Manchester United star Bruno Fernandes could be set for a shock departure from Old Trafford. The Express are reporting that the Portuguese attacker's contract talks – which are believed to have commenced in November last year – have not been as fruitful as both parties would have liked and that a deal has not been reached.
PREMIER LEAGUE・14 HOURS AGO
firstsportz.com

Bruno Fernandes was unhappy with the officials when the full-time whistle blew at Villa Park. Manchester United threw away a two-goal lead when Aston Villa scored two goals in the second-half. The home side came out the better side after the break and United couldn’t hold onto the lead after...
PREMIER LEAGUE・2 DAYS AGO
Yardbarker

It was another disappointing result for Manchester United as they let a 2-0 lead slip late on against Aston Villa last night. The Red Devils looked in a strong position to take all three points after two goals from Bruno Fernandes, but then two goals in the space of four minutes from Jacob Ramsey and Philippe Coutinho earned the home side a draw.
PREMIER LEAGUE・1 DAY AGO

Kevin De Bruyne scored a brilliant winner as Premier League leaders Manchester City moved 13 points clear with a 1-0 victory over second-placed Chelsea on Saturday.The Belgian playmaker, who had an unhappy spell at Chelsea early in his career, curled beyond Kepa Arrizabalaga from distance to settle a tight contest at the Etihad Stadium with 20 minutes remaining.It was a moment of magic worthy of winning any game but was the least City deserved having dominated against the side that beat them in last season’s Champions League final.Blue is the colour! 💙#ManCity pic.twitter.com/816nfRAo0M— Manchester City (@ManCity) January 15, 2022The win...
PREMIER LEAGUE・2 DAYS AGO

The theme pre-match had extended to the focus in the aftermath of an exacting 3-0 victory over Brentford, which catapulted Liverpool above Chelsea and loosely within reach of Manchester City at the Premier League summit.Just as, ahead of the encounter, he referenced the external din over the absence of Mohamed Salah and Sadio Mane due to the African Cup of Nations, Liverpool manager Jurgen Klopp circled it in his post-match briefing. The anaemic attack during the goalless draw against 10-man Arsenal in the first-leg of the Carabao Cup semi-final raised obvious concerns, slightly lifted by contributions in front of the...
PREMIER LEAGUE・14 HOURS AGO
The Independent

Wolves survived a late Southampton fightback to maintain their European push.Raul Jimenez’s penalty, Conor Coady’s first Molineux goal for six years and Adama Traore’s injury-time effort earned a 3-1 win.James Ward-Prowse’s stunning free-kick pulled a goal back for the Saints and Romain Perraud hit the bar just before Traore sealed victory for the hosts.Bruno Lage’s side were not at their vibrant best but it was enough to squeeze past the Saints to sit eighth in the Premier League.They are just two points adrift of the top six while mid-table Southampton slipped to a seventh defeat of the season.There was little...
PREMIER LEAGUE・2 DAYS AGO
Daily Mail

Cristiano Ronaldo has handed Manchester United fans a fresh boost, after the forward shared images of 'the winners' from Carrington's training session on Instagram. The Portuguese forward missed United's FA Cup and Premier League games against Aston Villa, with coach Ralf Rangnick confirming the 36-year-old was absent for the Friday training session.
PREMIER LEAGUE・10 HOURS AGO