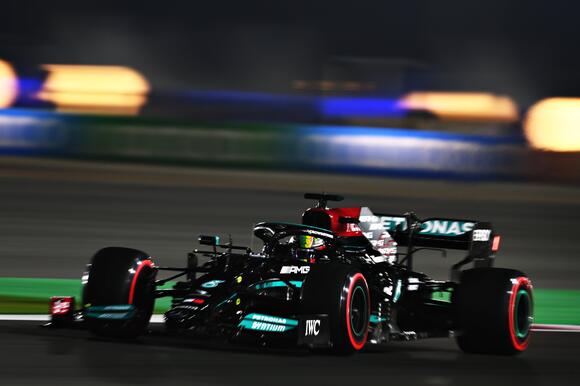 Lewis Hamilton has revealed how he overcame a stomach ache to produce a sensational drive in qualifying to grab pole position at the Qatar Grand Prix .

The seven-time world champion landed his 102nd pole position of his career, with Max Verstappen alongside him on the front row.

But Hamilton’s +0.455 advantage over the Red Bull was the largest gap in dry qualifying this year, emphasising the great potential of the Mercedes in the closing stages of the season.

And after overcoming his illness, Hamilton praised the Mercedes engineers for working late into the night to find solutions.

“On Friday and Saturday I wasn't feeling well,” Hamilton revealed to Sky Sports F1. “I really struggled throughout practice.

“I was here until midnight working with the engineers. Found a lot of areas I can improve, made some changes for P3 and carried it through to qualifying.

“That last lap was beautiful, really sweet, this track is amazing to drive, it felt good. Stomach ache, from Wednesday, but felt fantastic today and slept really well.

“It's such a fast circuit, it's not the easiest to follow, but it's not massively degrading on the tyres.”

While Hamilton will also have the support of Mercedes team-mate Valtteri Bottas, who starts from third, Verstappen is on his own at the front of the grid.

The second Red Bull of Sergio Perez failed to make it out of the second round of qualifying and will start down in 11th.

“I think we were lacking a bit of pace,” said Verstappen.

“I think it is a bit more tricky for us. We are struggling a bit more than normal but nevertheless we are second so it is all to play for.

“It has been a bit up and down. I was happy in qualifying - but just not quick enough as that sometimes happens.

“I thought I had had a good lap and then I heard the gap in lap time and thought, well I didn’t really need to risk that. For tomorrow, when it is such a gap it will be difficult.”

The end of qualifying caused confusion as a puncture for Pierre Gasly saw the yellow flag come out and go back in.

The AlphaTauri man has impressed over the weekend and will start fourth despite his late issue, with Fernando Alonso fifth for Alpine.

PA contributed to this report

Lewis Hamilton’s Formula One future should not be taken for granted, Zak Brown has insisted – with the McLaren boss admitting he would not be surprised if the seven-time world champion sensationally quits.More than a month on from the controversial conclusion to the Abu Dhabi Grand Prix which denied Hamilton a record eighth title, the Mercedes driver is said to be debating whether to return to the grid in 2022.Hamilton has been conspicuous by his absence from social media in the weeks since the debacle in the desert.An FIA inquiry was launched last week, but the governing body’s findings...
MOTORSPORTS・1 DAY AGO
The Independent

Toto Wolff does not think that Lewis Hamilton will ever “get over” the controversial ending to the 2021 Formula 1 season.Hamilton was denied a record-breaking seventh world title after Max Verstappen passed him on the final lap of the season’s final race in Abu Dhabi. Verstappen had been afforded the opportunity to line up an overtake after the intervention of race director Michael Masi, who permitted lapped cars between the title rivals to un-lap themselves, clearing a path for the Red Bull driver to snatch his first Drivers’ Championship.Revealing that he and his team had been left “disillusioned” with...
MOTORSPORTS・1 DAY AGO
Insider

Hamilton's usually active social media feeds have been dormant since December 11, and he has not been seen out in public since last season's finale.
MOTORSPORTS・1 DAY AGO

The Formula 1 off season rumbles on with the aftermath of Abu Dhabi still an intense topic in F1 circles, not to mention the link between that and Lewis Hamilton’s future. The seven-time world champion appears to be switching off after the bitter ending to the 2021 season as Max Verstappen stole a maiden world title following a thrilling final lap.But there is also much to debate and discuss surrounding both new rules for the upcoming season, as well as uncertainty surrounding who will line up on the grid.Another trend is how Mercedes, Toto Wolff and the FIA mend...
MOTORSPORTS・2 DAYS AGO
racingnews365.com

Max Verstappen intends to celebrate his 2021 title win by running number 1 on his car during the upcoming F1 season, something Lewis Hamilton opted against in recent years. But why are their views opposed on the matter?. Max Verstappen is set to use number 1 on his Red Bull...
MOTORSPORTS・2 DAYS AGO
racingnews365.com

Horner reveals how Verstappen will prepare for title defence

Speaking in an exclusive interview with RacingNews365.com, Christian Horner has outlined how Max Verstappen has switched his mental focus to the 2022 season. Red Bull team boss Christian Horner has revealed that Max Verstappen has begun stepping up his preparations ahead of the 2022 season, having returned from his winter holidays.
MOTORSPORTS・1 DAY AGO
firstsportz.com

Max Verstappen the 2021 Formula1 world champion has recently shed light on the condition on which he would join the Le Mans 24 competition sometime in the future. It has been stated by motorsport.com on Twitter that the 2021 Formula1 champion Max Verstappen has talked about participating in 24 hours of Le Mans and has said “I would love to participate in the 24 Hours of Le Mans. I don’t know yet when it will happen. I’ve watched this race many times before and I was there even when my father was racing there. I think it’s a very good race. I want to participate in the future, but I will do it with my father.”
MOTORSPORTS・7 HOURS AGO

Sports stars and clubs across the world continue to provide an insight into their lives on social media.Here, the PA news agency looks at some of the best examples from January 19.TennisAndy Murray served Naomi Osaka a compliment. And she returned it.Anyone put their heart on their sleeve and fight harder than @andy_murray ? 🥺🙏🏾🔥 https://t.co/c6G2SA2Ycx— NaomiOsaka大坂なおみ (@naomiosaka) January 19, 2022Osaka was feeling arty.Lol omg 😂💀 https://t.co/SeYxBn0avu— NaomiOsaka大坂なおみ (@naomiosaka) January 19, 2022Serena had a battle on her hands.[xdelx]Denis Shapovalov struggled with a banana!Sometimes the struggle is real 😅 Sorry, @denis_shapo 🍌#AusOpen • #AO2022• #AOTennis pic.twitter.com/NYtCJkQYss— #AusOpen (@AustralianOpen) January 19, 2022Madison...
TENNIS・21 HOURS AGO
The Independent

Sports stars and clubs across the world continue to provide an insight into their lives on social media.Here, the PA news agency looks at some of the best examples from January 17.CricketAustralia and the Barmy Army bonded over Sweet Caroline View this post on Instagram A post shared by Steve Smith (@steve_smith49)Sophie Ecclestone’s Ashes preparations are going well!7️⃣-1️⃣4️⃣ 🔥 @Sophecc19 was in fine form with the ball in yesterday's intra-squad game! pic.twitter.com/w2AvZpHUZZ— England Cricket (@englandcricket) January 17, 2022All seven of @Sophecc19's...
TENNIS・2 DAYS AGO

Top-tier motorsport and positive climate action are not concepts the general population often associates with one another. After all, how can sending out a field of high-speed cars to race around a track for a couple of hours a few times per month be anything other than a colossal contributor to environmental decline and global temperature rises?Motorsport is about speed and glory, of course, but the manufacturers who enter racing championships such as Formula One do so primarily for another reason – to use the resources, competition, and talent in motorsport to develop technologies which can be applied to road...
MOTORSPORTS・7 HOURS AGO