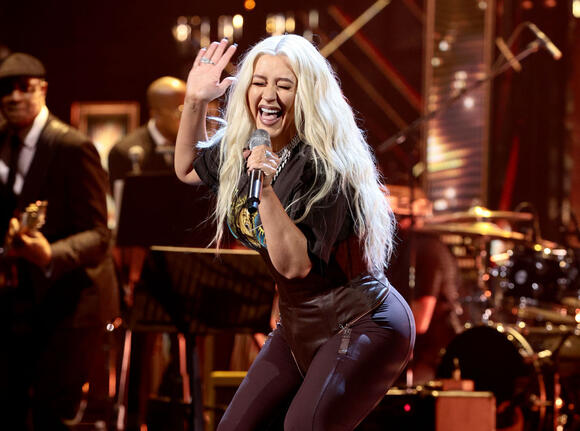 In an Instagram story posted late Friday, Spears shared a video of Aguilera speaking to the press during this week’s Latin Grammys in Las Vegas. A reporter asked Aguilera whether she had spoken to Spears since the conservatorship was terminated ; however, a publicist promptly cut short the interview — “We’re not doing that,” they said — with Aguilera simply saying, “But I’m really happy for her!”

Overlaid on that video, Spears wrote on Instagram, “I love and adore everyone who supported me … but refusing to speak when you know the truth is equivalent to a lie !!!! 13 years being in a corrupt abusive system yet why is it such a hard topic for people to talk about ??? I’m the one who went through it !!!! All the supporters who spoke up and supported me thank you … Yes I do matter !!!!!”

(In the next Instagram story, Spears praised Lady Gaga for continually voicing her support for the singer, “Thank you @ladygaga for genuinely taking your time to say something so kind. You made me cry !!! I love you !!!”)

Although Aguilera avoided the conservatorship question at the Latin Grammys, the singer — whose history with Spears dates back to their time together with the Mickey Mouse Club — penned a series of tweets in support of Spears in June during the #FreeBritney movement. It’s unclear if Spears ever saw those tweets.

“These past few days I’ve been thinking about Britney and everything she is going through. It is unacceptable that any woman, or human, wanting to be in control of their own destiny might not be allowed to live life as they wish,” Aguilera wrote at the time.

“To be silenced, ignored, bullied or denied support by those ‘close’ to you is the most depleting, devastating and demeaning thing imaginable. The harmful mental and emotional damage this can take on a human spirit is nothing to be taken lightly.”

Aguilera added, “To a woman who has worked under conditions and pressure unimaginable to most, I promise you she deserves all of the freedom possible to live her happiest life. My heart goes out to Britney. She deserves all the TRUE love and support in the world.”

🤔 So...apparently Christina has already voiced her support for Britney months ago .... Now Britney thinks the she's supposed to remain the topic of everyone's conversation weeks later?? 🙄 Seems to me, the more Britney speaks (or types), the more her mental instabilities are exposed..... At this point, she ought to focus more on living the life she fought for, (and was just granted the right to have back).... Obviously, THE JUDGE supported her and at the end of the day, that's the only support which could have allowed this change.....Stop fishing for additional support from everyone else.... Move on, Britney and live your life.

The anticipation was mounting as #FreeBritney L.A. leader Kevin Wu stood among hundreds of Britney Spears fans outside of the Stanley Mosk Courthouse on Nov. 12, waiting to hear whether the pop star would be set free from her 13-year conservatorship. After countless rallies, protests, and social media campaigns calling for Spears’ release, word finally reached the masses and confetti cannons painted the asphalt rainbow: Spears was free. “I was just losing my mind,” Wu — a data analyst by day — tells Rolling Stone. “It was rewarding to see that our years of advocacy had finally paid off.” Wu is...
CALIFORNIA STATE・9 HOURS AGO
Rolling Stone

Supreme Court Justice Stephen Breyer is set to announce his retirement at the age of 83, avoiding a repeat of the debacle created by Ruth Bader Ginsburg’s untimely death and handing the Biden administration a chance to install the first new liberal justice on the court since Elena Kagan in 2010.  Standing in the way, as always, is the Other Joe. Our task, once again, is to read the tea leaves and arcane symbols scrawled in clean coal on cavern walls in order to divine what West Virginian Senator Joe Manchin will do next. As Vox notes, pondering this exact question,...
CONGRESS & COURTS・1 DAY AGO
Rolling Stone

‘It’s F-cked Up to Try and Discredit My Writing’: Taylor Swift Fires Back at Blur’s Damon Albarn

(UPDATE 25/1): Damon Albarn has issued an apology to Taylor Swift, blaming The Los Angeles Times for publishing “clickbait.” “I totally agree with you,” he told her. “I had a conversation about songwriting and sadly it was reduced to clickbait. I apologize unreservedly and unconditionally. The last thing I would want to do is discredit your songwriting. I hope you understand.”
MUSIC・4 DAYS AGO
iheart.com

Christina Aguilera Opens Up About Her New Spanish Album

Fans of Christina Aguilera and Britney Spears know the two pop stars have a long history together. After coming up in the music industry together more than two decades ago, Aguilera is thrilled to see her old Mickey Mouse Club co-star regain control of her own life. When asked if...
MUSIC・7 DAYS AGO

The rockstar has enlisted Miley Cyrus to perform at his annual Grammy Awards viewing party to benefit Janie's Fund.
CELEBRITIES・1 DAY AGO
iHeartRadio

In their Variety's Actor On Actor interview, Lady Gaga opened up to Jake Gyllenhaal about acting being an "escape."
CELEBRITIES・1 DAY AGO
Variety

Madonna teased the idea of a stadium tour with Britney Spears on Instagram Live Wednesday. When asked if she will ever do a world tour again, Madonna responded, “Hell yeah. I have to. Stadium baby. Me and Britney, what about that?” “Not sure if she’d be into it, but it would be really cool. We could like, reenact the original [kiss],” Madonna continued, referencing her and Britney’s famous smooch at the 2003 MTV Video Music Awards. Spears hasn’t performed live since wrapping up her “Britney: Live in Concert” tour in October 2018, but now that the singer has been released from her conservatorship...
CELEBRITIES・2 DAYS AGO
NME

Britney Spears has hit out at her sister Jamie Lynn Spears yet again following her TV interview. The singer shared a statement on Twitter yesterday (January 13) following Jamie Lynn’s appearance on Good Morning America, where she spoke about Britney’s controversial conservatorship, which was terminated last year. In...
CELEBRITIES・14 DAYS AGO

Britney Spears is speaking out after her sister Jamie Lynn Spears’ recent television interview. While promoting her upcoming memoir, Things I Should Have Said, Jamie Lynn sat down for an interview with ABC News’ Juju Chang on Good Morning America on Wednesday, where she addressed passages she wrote about Spears. In one passage, Jamie Lynn writes about an incident in which Spears, feeling scared, takes a knife and locks herself and Jamie Lynn in a room. When asked why she decided to include that in her memoir, Jamie Lynn said it was to share her experience with panic attacks. “First off, I think...
RETAIL・14 DAYS AGO
mix929.com

The war of words continue between sisters Britney Spears and Jamie Lynn Spears. After the “Toxic” singer sent a cease-and-desist letter over her baby sister’s new book, Things I Should Have Said, and slammed her on Instagram — Jamie Lynn has responded via her lawyer. In...
CELEBRITIES・8 DAYS AGO
Bossip

33-year-old “Easy on Me” singer Adele “barely rehearsed,” for her Las Vegas residency, instead she was allegedly “shouting and sobbing” while talking on the phone with her sports agent boyfriend Rich Paul, 40 according to a PageSix report — but was he actually caught CHEATING???
CELEBRITIES・2 DAYS AGO
GMA

Howard Stern has slammed Joe Rogan in the past for spreading misinformation about the COVID-19 vaccine, but that doesn’t mean Stern wants to see the controversial Spotify radio host shunned in public opinion. Speaking on his Sirius XM radio show this week, Stern said he doesn’t believe in censorship and expressed a level of admiration for Rogan’s podcast empire. “I don’t listen to Joe Rogan. I know Joe from 100 years ago,” Stern said this week (via Mediaite). “We’re no longer friendly. We were friendly at one point — I just knew him as the funny guy, as a comedian —...
CELEBRITIES・1 DAY AGO
The US Sun

FANS are buzzing about Jordyn Woods, speculating that she may be expecting a baby with boyfriend Karl-Anthony Towns after she posted a photo of tiny shoes amid Khloe Kardashian's latest drama. The Keeping Up With the Kardashians alum and Kylie Jenner's former BFF have been at odds since it was...
BEAUTY & FASHION・1 DAY AGO
iHeartRadio

Miss Jackson is telling all
CELEBRITIES・2 DAYS AGO
Indy100

Weatherman appears to fart on live TV and people are shocked

A weatherman in Louisville, Kentucky has been accused of farting live on air after a video of the incident went viral. While reporting on a cold front coming in from the Midwest, WDRB meteorologist Marc Weinberg paused his broadcast and appeared to create a warm front by farting, before continuing with the weather.
LOUISVILLE, KY・2 DAYS AGO
People

The Uncharted actor, 50, showed off his killer physique on Instagram Thursday, posting a video of himself baring his toned torso and biceps. "Had to whisper to not upset my wife for not wearing a shirt. 😬," Wahlberg joked in the caption, referencing the quiet voice he uses in the video.
WEIGHT LOSS・1 DAY AGO
Cosmopolitan

Khloé Kardashian has addressed the fact Tristan Thompson fathered a third child, with a subtle Instagram caption. Last month, basketball player Tristan made headlines when personal trainer Maralee Nichols alleged she had given birth to his child, after getting pregnant while he was in a relationship with Keeping Up With The Kardashian's Khloé.
NBA・1 DAY AGO
Distractify

While most people have a basic idea of who Hugh Hefner was and how his Playboy empire operated, the A&E docu-series Secrets of Playboy will shed a different light on the founder's legacy. Throughout the 10-part series, viewers will get to hear from some of Hef's former Playmate girlfriends, and...
RELATIONSHIPS・4 DAYS AGO
thesource.com

Adele fans who were hoping to catch her during her Las Vegas residency might find themselves waiting even longer (or indefinitely) to see her live. The pop star’s Caesar’s Palace “Weekends With Adele” residency, which was supposed to start in mid-January has already faced a series of delays and now maybe reportedly delayed even further due to issues with sports agent boyfriend Rich Paul.
CELEBRITIES・11 HOURS AGO