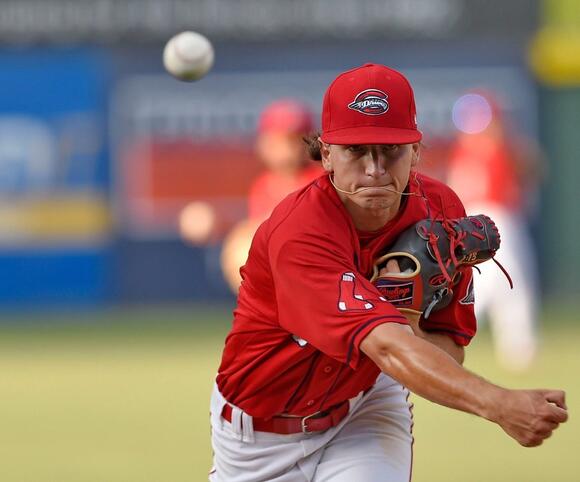 Nobody said Friday's round of roster decisions was going to be easy for the Red Sox. And it wasn't.

Like all Major League Baseball teams, the Sox were forced to define which players they were going to be adding to the 40-man roster, with eligible prospects left off now available to all clubs in the Rule 5 Draft.

We know how that works. Just ask the Yankees or Garrett Whitlock.

Heading into the deadline, the Red Sox had seven spots open on their 40-man roster, with the understanding that some of that space would ultimately be needed for offseason acquisitions. When it was all said and done, the Sox filled just four of them.

Pitchers Josh Winckowski, Brayan Bello, and Kutter Crawford, along with infielder Jeter Downs, are all now members of the Red Sox' 40-man roster.

For one, these are the guys who the team will always prioritize when either making a club, or being called up during the course of a season. It's a big deal.

Now, in just a couple of weeks (unless labor strife interferes) we will find out if the Red Sox' calculated gamble to expose some promising players to the Rule 5 Draft pays off.

Here are the names to keep an eye on:

Durbin Feltman: The 24-year-old reliever would seem to fit the profile of a player a team might prioritize in the Rule 5 Draft, having come off a promising season (2.96 ERA between Double-A and Triple-A), while having shown major-league stuff all the way back to his time as a closer at TCU.

Gilberto Jimenez: The Red Sox are flat-out banking on teams viewing the outfielder as being too young and inexperienced to keep on a big-league roster. The speedy 21-year-old held his own at Single-A Salem in 2021, hitting .306 with 13 stolen bases (albeit in 21 attempts).

Thaddeus Ward: This might be the riskiest decision of the bunch considering a team can pluck Ward and put him on its 60-day injured list due to the Tommy John surgery the pitcher underwent in June. They would only have to keep the 24-year-old on the 40-man roster for 90 days. Conversely, the Red Sox would be eating up a roster spot for a pitcher who has just two games in Double-A and isn't likely to see action in 2022. We are, however, talking about the Red Sox' Minor-League Pitcher of the Year just two seasons ago.

Here is the Red Sox' press release on the players they added to the 40-man roster:

Winckowski , 23, is ranked by Baseball America as the Red Sox’ No. 9 prospect. He split the 2021 season between Portland (21 games, 20 starts) and Worcester (two starts), going 9-4 with a 3.94 ERA (49 ER/112.0 IP), 101 strikeouts, and 33 walks. Following the season, the right-hander made six appearances for Scottsdale in the Arizona Fall League. Selected by the Blue Jays in the 15 th round of the 2016 June Draft, Winckowski spent his first five seasons in Toronto’s minor league system before being traded to the Mets on January 27, 2021, then to the Red Sox on February 10.

There are a lot of parallels between the Yankees and the Boston Red Sox. Fierce rivals in the AL East, they are also rivals when it comes to free agency. Their willingness to spend and desire to add championships matches that of their counterparts. Naturally, both teams are forces to...
MLB・14 HOURS AGO
Inside The Dodgers

ESPN Buster Olney thinks Treinen is one of the bullpen arms in baseball.
MLB・2 DAYS AGO

State
Florida State
Inside The Dodgers

Joe Kelly is quite the character around Major League Baseball. With two championships under his belt across a 10-year career, Kelly has made his name known in a big way. He took one World Series against the Dodgers in 2018 and another with Los Angeles in 2020, finally bringing a title back to the ...
MLB・2 DAYS AGO
Los Angeles Times

Tyler White agreed to terms for a minor league contract with the Milwaukee Brewers.
MLB・2 DAYS AGO
Inside The Blue Jays

Outfielder Oscar Colás, the No. 5 international prospect according to MLB Pipeline, came to terms on a $2.7 million deal with the Chicago White Sox, MLB.com’s Jesse Sanchez reported Saturday. According to Sanchez, the Sox and outfielder Erick Hernandez agreed to terms on a $1 million deal. MLB Pipeline ranks Hernandez as the No. 28 international prospect. Colás, who was born in Santiago de ...
MLB・2 DAYS AGO
WEEI Sports Radio

Jonathan Papelbon joined Rob Bradford on the Live BP podcast to make it clear he has no intention of following in the footsteps of his former teammate Jon Lester, saying he will never announce his retirement.
MLB・18 HOURS AGO
Audacy

Jonathan Papelbon joined WEEI’s Live BP Show and spoke about the backstory behind why he and Bryce Harper went at it in the Washington Nationals dugout in 2015.
MLB・14 HOURS AGO
USA TODAY

Despite 609 career home runs and seven All-Star appearances, the former Cubs slugger hasn't come close to being elected in his nine years.
MLB・17 HOURS AGO

The Dodgers outfielder Propagate media company will be producing films, TV shows, and podcasts.
TV SHOWS・9 HOURS AGO
Inside The Phillies

The Philadelphia Phillies have made their move on Venezuelan prospect William Bergolla Jr.
MLB・2 DAYS AGO
Inside The Dodgers

The Dodges reportedly have signed pitcher Accimia Morales and position player Samuel Muñoz.
MLB・1 DAY AGO
Inside The Phillies