The Latest on Kevin De Bruyne, Jack Grealish, Dominic Calvert-Lewin and the Complete Team News Ahead of Man City vs Everton (Premier League) 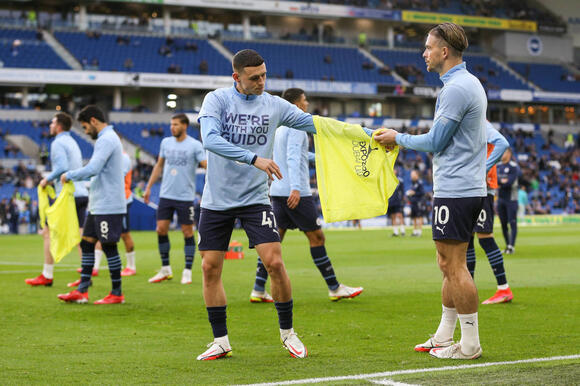 City, who moved to second in the Premier League table following a 2-0 win over Manchester United earlier this month, face an Everton side who are winless in their last five matches.

Pep Guardiola's side are just three points off the top of the table, while the Toffees come into this weekend's match in 11th place - having not won in the Premier League since September.

The Blues, who face Paris Saint-Germain in the Champions League on Wednesday night, have four matches between Sunday and the 1st of December, as they look to up the ante in their latest Premier League title defence.

Manchester City have won their last eight matches in all competitions against the Merseyside club, having thrashed Everton 5-0 on the last day of the 2020/21 season back in May.

Ahead of a return to Premier League action for both clubs on Sunday afternoon, here is the latest team news from both the Manchester City and Everton camps, including the latest surrounding the likes of Jack Grealish and Dominic Calvert-Lewin.

Pep Guardiola will be without a number of key Manchester City players for Sunday's meeting with Everton, with the Catalan having provided an update on the conditions of Jack Grealish, Phil Foden and Kevin De Bruyne during Friday's press conference.

The 30-year-old, who featured in Belgium's 1-1 draw with Wales on Tuesday night, is currently self-isolating after a positive test on Wednesday.

Pep Guardiola also casted doubt on the availability of Jack Grealish, who returned early from international duty with England due to an injury.

When asked about the condition of Manchester City's summer signing, the Catalan said that Grealish was "getting better," but he doesn't think the £100 million man will be available for Sunday's game with Everton.

The City manager also revealed that Phil Foden returned from England duty with "a knock and a problem in his leg," and when asked whether the 21-year-old will feature at the weekend, Pep Guardiola replied, "We will see."

Ferran Torres also remains unavailable for the Blues, as the Spaniard continues his recovery from a broken foot.

Everton will also be without four first-team stars when they visit the Etihad Stadium on Sunday afternoon, with the most notable absence being star striker Dominic Calvert-Lewin.

The Everton forward will miss the clash at the Etihad through an injury which will reportedly see him sidelined for "at least two or three weeks," according to manager Rafa Benitez.

Benitez also revealed that the Toffees would be without Yerry Mina, Abdoulaye Doucoure, and Andre Gomes for their meeting with the reigning Premier League Champions.

Derby manager Wayne Rooney is in contention for an emotional return to Everton after the former England star's impressive handling of affairs on the pitch despite a financial crisis at the Championship club. Rooney is among the bookmakers' favourites to take permanent charge at Goodison Park after Rafael Benitez was sacked on Sunday. The 36-year-old made his name at Everton as a precocious teenager before rejoining his boyhood club following a glittering spell at Manchester United. And, in his short time as a manager, Rooney has offered evidence that the potential return of the prodigal son would be more than just an olive branch to Everton supporters infuriated by the dismal reign of the despised Benitez.
PREMIER LEAGUE・2 DAYS AGO
CityXtra

The Algeria superstar was disappointingly knocked out of the Africa Cup of Nations in the group stage on Thursday night, courtesy of a 3-1 defeat against Ivory Coast on matchday three. The defending Africa Cup of Nations champions failed to win a game across three fixtures, and Mahrez - who...
PREMIER LEAGUE・13 HOURS AGO
The Guardian

Manchester United rode their luck in the first half, but were ruthless in the second to continue their push for the top four
PREMIER LEAGUE・1 DAY AGO

There is a strong case to make for Kevin De Bruyne being the face of Manchester City’s unprecedented dominance under Pep Guardiola. The Belgian has emerged as arguably the best midfielder in the world during his time under the Catalan coach, raising the bar for his counterparts with his spellbinding displays, season upon season.
PREMIER LEAGUE・2 DAYS AGO
CityXtra

Manchester City are gearing up for yet another weekend of Premier League action, as they travel to the South Coast to take on Southampton, with the intention of strengthening their grip on top-spot in the table. Pep Guardiola's side have the opportunity to extend their lead over third-place Chelsea to...
PREMIER LEAGUE・1 DAY AGO
CityXtra

Manchester City will be looking to cap off what has so far been a perfect month with a win over Southampton at the weekend, as Pep Guardiola's side aim for a 13th consecutive league triumph to extend their advantage further at the top of the Premier League. Kevin De Bruyne's...
PREMIER LEAGUE・1 DAY AGO
CityXtra

Ruben Dias and Kevin De Bruyne were named as Manchester City’s two representatives in the FIFA FIFPro World XI at a virtual event in Zurich on Monday evening. The pair played a major role in Manchester City’s 2020/21 Premier League title win, fourth successive Carabao Cup victory and spearheading their side to a first-ever Champions League final in the club’s history.
PREMIER LEAGUE・2 DAYS AGO

Mahrez has been in sensational form for the Premier League champions since the start of the campaign, with the former Leicester City star often coming up with the goods in front of goal in the absence of a natural striker in the first-team ranks at the Etihad Stadium. The 30-year-old,...
PREMIER LEAGUE・1 DAY AGO
CityXtra

Kevin De Bruyne has been one of many midfielders who have been tasked with filling the gap in the number nine slot at the Etihad Stadium over the past year-and-a-half, alongside the likes of Bernardo Silva, Phil Foden, Ilkay Gundogan and Jack Grealish. The 30-year-old, who was named in the...
PREMIER LEAGUE・1 DAY AGO
The Independent

Duncan Ferguson oversaw Everton training on Tuesday amid reports linking Wayne Rooney and Frank Lampard with the club’s managerial vacancy.The Toffees are looking for a successor to Rafael Benitez after sacking the Spaniard on Sunday.It has been reported that Rooney, the former Everton forward currently managing Derby, and ex-Chelsea boss Lampard are set to be interviewed for the post.Having on Tuesday taken what was the team’s first training session since Benitez’s dismissal, Ferguson could be in caretaker charge when they host Aston Villa on Saturday.The Scot, another former Everton player who has been part of their coaching staff since 2014,...
PREMIER LEAGUE・2 DAYS AGO
CityXtra

The Ukrainian international is one of the biggest fan favourites at Manchester City, often hailed for his impressive versatility and steely determination since his arrival from FC Ufa in 2016. Oleksandr Zinchenko joined the club as a central midfielder, but was converted into the left-back role under Pep Guardiola’s tutelage,...
PREMIER LEAGUE・1 DAY AGO

Following Manchester City’s early elimination from the 2021/22 Carabao Cup, the Premier League champions are now set to have a two-week break after facing Southampton in the Premier League this weekend. It was originally reported by the Telegraph’s Mike McGrath that Pep Guardiola had planned a warm-weather training camp...
PREMIER LEAGUE・2 DAYS AGO
CityXtra

This season, Phil Foden's performances have continued to hit the staggering heights that saw him emerge from the Manchester City academy at just 17 years of age. The Stockport-born midfielder is one of the first names on Pep Guardiola's teamsheet at the moment, with his technical quality pinpointed as the reason he continues to be deployed in the false nine role.
PREMIER LEAGUE・1 DAY AGO
CityXtra

Given the cutthroat nature of representing Manchester City at the highest level, the club have adopted a tendency to send players on loan, in order to accelerate their development and increase their chances of first-team football. In the 2021/22 season alone, a staggering 36 players from Manchester City have been...
PREMIER LEAGUE・20 HOURS AGO
Yardbarker

FIFA have named the world XI of the best players in the world over the past year picked by fans across the globe, with five Premier League players making the star-studded lineup, as confirmed on Thursday. Kevin De Bruyne has been named as part of a three-man midfield alongside Chelsea...
PREMIER LEAGUE・1 HOUR AGO
newschain

Aston Villa boss Steven Gerrard believes Rafael Benitez’s failed appointment at Everton was unique and warned his men to expect a backlash. Everton sacked Benitez last weekend after less than seven months in charge and will have Duncan Ferguson in caretaker charge when they host Villa on Saturday. Gerrard...
PREMIER LEAGUE・12 MINUTES AGO
CityXtra

The City Football Group-owned clubs have proved to be a temporary home for several developing prospects at Manchester City, such as the likes of Pablo Maffeo, Marlos Moreno and Yan Couto in the recent past. With the umbrella company holding stakes in nine different clubs in different leagues around the...
PREMIER LEAGUE・1 DAY AGO
CityXtra

As Manchester City have the benefit of full midweek breaks in between matches at present, many of Pep Guardiola's squad are making the most of their time off when away from the City Football Academy. Several members of the squad live in Manchester city centre, and are often spotted enjoying...
PREMIER LEAGUE・17 HOURS AGO
The Guardian