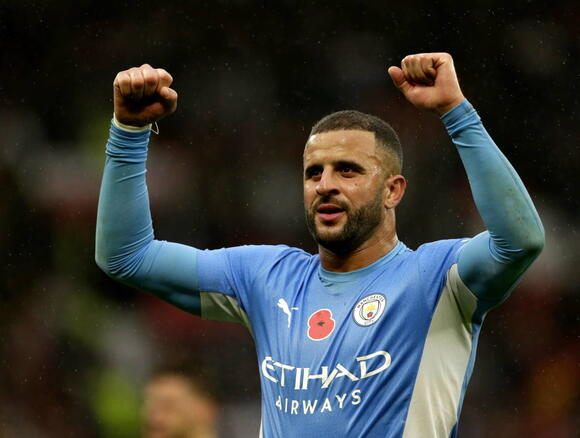 The Blues will face off against Rafa Benitez’s Everton side on Sunday, and with the Sky Blues’ looking to retain their Premier League crown for the second time under their current manager, Pep Guardiola will be eager to see his side continue their winning ways.

Everton are currently enduring a poor run of form and have recorded just two points across their previous five Premier League fixtures.

Ahead of Sunday’s clash with Everton, City Xtra takes a look at some of the more interesting and notable statistics.

Bernardo Silva was largely tipped to evolve as David Silva's successor at the Etihad Stadium when the 27-year-old completed a £43 million move to join Manchester City from AS Monaco off the back of a league-winning campaign in France. The Portuguese, who has been arguably Manchester City's best player...
PREMIER LEAGUE・2 DAYS AGO
The Guardian

A drone interrupted play at Brentford, we had a late, late winner at Old Trafford and Newcastle dug in for victory on an eventful afternoon
PREMIER LEAGUE・1 DAY AGO
CityXtra

With Manchester City operating without a natural number nine this season, the prospect of signing a proven goalscorer in the summer remains an enticing one. Despite Pep Guardiola’s fluid false-nine system reaping rewards as City are in contention on three fronts so far this season, the need for a Sergio Aguero successor remains crucial to the club's future prospects.
PREMIER LEAGUE・2 DAYS AGO

Raheem Sterling has cemented his reputation as one of the most key players for Manchester City and England in recent years, with the London-born attacker having established his status as one of the deadliest wingers in world football. The 27-year-old has developed into the embodiment of the modern-day winger since...
PREMIER LEAGUE・2 DAYS AGO
San Diego Union-Tribune

On Friday, numerous reports from South America stated that Manchester City were in talks to sign Julián Álvarez - one of Argentina's hottest prospects, with one journalist reporting that a deal was "about to close" for the player to move to England. The 21 year-old was named South...
PREMIER LEAGUE・2 DAYS AGO
SkySports

Team news, stats and prediction ahead of Arsenal vs Burnley in the Premier League on Sunday; kick-off 2pm. Arsenal will be without two key midfielders as they welcome Burnley to the Emirates Stadium on Sunday afternoon. Both Granit Xhaka and Thomas Partey are suspended for the game with the pair...
PREMIER LEAGUE・2 DAYS AGO

Minute-by-minute report: Josh Sargent scored one of the goals of the season – if not the goal of the season – as Dean Smith’s team swept aside their relegation rivals. Scott Murray was watching.
PREMIER LEAGUE・2 DAYS AGO
Yardbarker

The Latest on Riyad Mahrez, Nathan Ake, Tino Livramento and the Complete Team News Ahead of Southampton vs Man City (Premier League)

Kevin De Bruyne's strike on the 70th minute extended City's lead at the top of the Premier League, as the Blues secured a hard-fought 1-0 victory against Chelsea at the Etihad Stadium last weekend. Pep Guardiola's side will conclude a hectic start to the year away to Southampton on Saturday,...
PREMIER LEAGUE・2 DAYS AGO
CityXtra

On Friday, a flurry of reports from both Argentina and England claimed that Manchester City were in talks to sign Julian Alvarez from River Plate, with the 21-year-old out of contract in December. The centre-forward, who recorded 39 direct goal involvements in 46 appearances for River Plate in 2021, has...
PREMIER LEAGUE・1 DAY AGO
The Independent

Aymeric Laporte says runaway Premier League leaders Manchester City must not lose focus as they head into a fortnight’s break on the back of dropping points for the first time since October. City’s impressive winning run was halted at 12 top-flight games by Saturday’s frustrating 1-1 draw at Southampton...
PREMIER LEAGUE・1 DAY AGO
Yardbarker

Fresh from a crucial 1-0 win against Premier League title rivals Chelsea last weekend, Manchester City will look to extend their advantage at the top of the table with three points this afternoon. The Covid-19 outbreak at the City Football Academy in recent weeks appears to have calmed down significantly,...
PREMIER LEAGUE・1 DAY AGO
Yardbarker

Former Tottenham Hotspur full-back Kyle Walker-Peters opened his Premier League goalscoring account in some style against Manchester City. Southampton battled to a 1-1 draw with the runaway league leaders with Mohamed Salisu in particular putting in one of the defensive displays of the season. However, it was Walker-Peter’s who has...
PREMIER LEAGUE・1 DAY AGO
goal.com

What a game that was from Diego Simeone's men, trailing 2-0 before scoring three goals in the second half – including two in stoppage time – to claim all three points. An epic, monumental comeback. Whew! Take a breather, everyone. Has this been the most Atletico Madrid game...
PREMIER LEAGUE・1 DAY AGO
blackchronicle.com

Pep Guardiola has transformed Manchester City during his tenure at the Etihad from mere title contenders to yearly juggernauts. Already, Guardiola’s 2017-18 season saw City rewrite the record books and it obliterated the English top flight, winning the league by a 19-point margin and setting records for largest margin of victory, most points in a season, most goals scored in a season, and greatest goal differential in a season.
PREMIER LEAGUE・1 DAY AGO
CityXtra

At the start of the ongoing season, the 2021/22 campaign was billed to be a four-horse race between Manchester City, Chelsea, Liverpool, and Manchester United. However, fast forward to the Premier League table at this present moment and Pep Guardiola’s side sit an impressive 11 points clear of second-placed Liverpool.
PREMIER LEAGUE・1 DAY AGO
The Independent

Liverpool moved to within nine points of Manchester City at the top of the Premier League table with an entertaining 3-1 win over Crystal Palace at Selhurst Park.Virgil van Dijk gave the visitors the lead in the eighth minute, thumping a bullet header beyond Vicente Guaita from an Andy Robertson corner. And Liverpool’s dominance was rewarded with a second shortly after the half hour mark when Robertson crossed for Alex Oxlade-Chamberlain to bring down and fire home at the back post.Palace finally got a foothold in the game towards the end of the first half and continued that urgency after...
PREMIER LEAGUE・22 HOURS AGO
CityXtra

Pep Guardiola has been the jewel in the Manchester City crown for a number of years. The Spanish tactician’s genius is what has made the club a winning machine, securing three Premier League titles, one FA Cup and four Carabao Cup trophies in his five full seasons in charge.
PREMIER LEAGUE・19 HOURS AGO