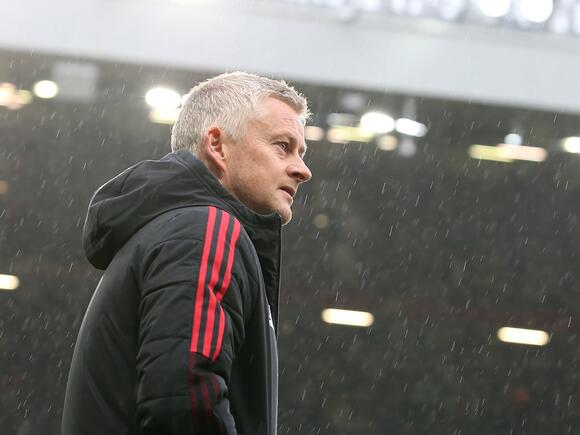 Manchester United boss Ole Gunnar Solskjaer is likely glad to have had an interruption to the domestic game thanks to the international break, after receiving heavy criticism for some painful defeats to rivals earlier this month.

They are back on the pitch this weekend though, away to Watford, and nothing other than a comfortable win will avoid the same comments and questions coming back his way, with United sixth in the Premier League table.

FOLLOW LIVE: Teams and all the action as Man United head to Watford

Watford linger just outside the relegation zone after four defeats in five games, though Claudio Ranieri did pick up his first victory as boss in the hammering of Everton three games ago - he’s yet to win on home soil, though.

Four of the league’s bottom five have now appointed new managers this season - three of them across the course of the international break, so Ranieri has to find results fast.

The game kicks off at 3pm on Saturday 20 November at Vicarage Road.

This game is not scheduled for broadcast in the UK.

No high-profile blunders for the Red Devils and their manager this time out, with the Hornets unlikely to be able to keep them at bay for long. Watford 1-3 Man United .

A drone interrupted play at Brentford, we had a late, late winner at Old Trafford and Newcastle dug in for victory on an eventful afternoon
PREMIER LEAGUE・2 DAYS AGO
LFCTransferRoom

Two of Liverpool's rivals for a top four place face each other at Old Trafford on Saturday as Manchester United take on West Ham and we can bring you the confirmed lineups. The Hammers currently sit in fourth place, eight points behind Liverpool and two points clear of the Red Devils.
PREMIER LEAGUE・2 DAYS AGO
The Independent

Sports stars and clubs across the world continue to provide an insight into their lives on social media.Here, the PA news agency looks at some of the best examples from January 23.FootballManchester United’s players celebrated Saturday’s last-gasp victory over West Ham.The United Way 🔴💪 pic.twitter.com/TiMjw39gpc— Harry Maguire (@HarryMaguire93) January 23, 2022What a feeling 😍 https://t.co/r2Y40TOp35— David de Gea (@D_DeGea) January 23, 2022Liverpool were happy to leave Crystal Palace with three points.Boom!!! 3 points! It’s a tough place to go and it showed. Time to recharge and get back to it after the break 😄 pic.twitter.com/UE3KQIyogO— Virgil van Dijk (@VirgilvDijk) January...
PREMIER LEAGUE・1 DAY AGO
The Independent

Manchester United’s Marcus Rashford scored a last-second winner as they beat West Ham United 1-0 at Old Trafford in the Premier League on Saturday to move up to fourth spot. Substitute Rashford tapped in a low cross from Edinson Cavani deep into stoppage time after United had broken down the left flank with the final move of the match. The win means United move above West Ham with 38 points from 22 matches while the Hammers are now fifth on 37 from 23.Until Rashford’s goal finished off an attack started by Cristiano Ronaldo and also featuring Anthony Martial there had...
PREMIER LEAGUE・2 DAYS AGO

Manchester United kept up the pressure on Women’s Super League leaders Arsenal with an impressive 3-0 win against Tottenham.Vilde Boe Risa volleyed the hosts into the lead after 38 minutes before Hayley Ladd netted a second ahead of the interval.Leah Galton added her side’s third in the second half as United recorded their sixth victory in as many matches to move above Chelsea and one point behind Arsenal who face Manchester City in Sunday’s late kick-off.United were able to take advantage of Chelsea’s goalless draw at Brighton.Erin Cuthbert came the closest to scoring for the Blues when her second-half strike...
SOCCER・1 DAY AGO
The Independent

What the papers sayThe Manchester Evening News says Jesse Lingard is looking to secure a loan move away from Old Trafford in the January transfer window. The 29-year-old midfielder has made just nine Premier League appearances this season, and it is believed Newcastle are interested in a potential loan deal.Brentford are finalising a deal for former Tottenham midfielder Christian Eriksen, according to the Daily Mail. The 29-year-old’s contract is reportedly for six months with an option for a one-year extension, however it all hinges on whether Eriksen completes his medical following his collapse during Denmark’s Euro 2020 match against Finland...
PREMIER LEAGUE・1 DAY AGO
The Independent

David De Gea hopes Manchester United’s “unbelievable” stoppage-time winner against top-four rivals West Ham will be the moment that kickstarts their campaign.Long since out of the Premier League title race, the FA Cup and Champions League remain the Red Devils’ only route to silverware having been knocked out of the Carabao Cup by Saturday’s opponents.That win in September was West Ham’s first at Old Trafford since 2007 and David Moyes was unable to mastermind another memorable triumph at his former club on Saturday afternoon.Ralf Rangnick’s side looked comfortable for the most part but it took a last-gasp strike from substitute...
PREMIER LEAGUE・1 DAY AGO
The Independent

With eight minutes plus stoppage time remaining and Manchester United still searching for a winner against West Ham, some jeers could be heard when Mason Greenwood’s number flashed up. It was not the first time that Old Trafford has registered its displeasure with Greenwood’s removal recently. The same happened in the defeat to Wolverhampton Wanderers. This time was different, though. It was not so much about the player coming off as the one coming on.Anthony Martial had not played a single minute under Ralf Rangnick at that point. A week earlier, he had been absent from the match day squad...
PREMIER LEAGUE・19 HOURS AGO

Crystal Palace vs Liverpool prediction: How will Premier League fixture play out?

Crystal Palace’s newly rejuvenated squad have adapted to Patrick Vieira’s ideas quicker than many people thought they would.The departure of Roy Hodgson promised more free-flowing football but risked relegation from the Premier League.FOLLOW LIVE: Team news and all the action as Crystal Palace host LiverpoolSo far, Vieira has tipped the scales in his favour but just one league win in five games will leave him desperately craving a victory to move further away from the drop zone - they currently sit 11 points clear of 18th place Norwich.Palace face an incredibly difficult task of welcoming Liverpool to Selhurst Park this...
PREMIER LEAGUE・1 DAY AGO
The Guardian

On a frustrating evening for the pair of big-name strikers, they once again struggled to show why they were so sought-after last summer
PREMIER LEAGUE・1 DAY AGO
Yardbarker

Fresh from a crucial 1-0 win against Premier League title rivals Chelsea last weekend, Manchester City will look to extend their advantage at the top of the table with three points this afternoon. The Covid-19 outbreak at the City Football Academy in recent weeks appears to have calmed down significantly,...
PREMIER LEAGUE・2 DAYS AGO
San Diego Union-Tribune

Welcome to The Independent’s live coverage of a huge London derby between Chelsea and Tottenham at Stamford Bridge. Thomas Tuchel’s side have already beaten Spurs three times so far this season, scoring seven goals and keeping three clean sheets in the process. But Chelsea have struggled of late as their title ambitions have slipped away. They now sit 13 points off Manchester City as securing a top four place becomes a more realistic target.Meanwhile, Spurs are unbeaten in nine Premier League games under Antonio Conte and are now in a superb position to qualify for next season’s Champions League....
PREMIER LEAGUE・1 DAY AGO
The Independent

Thomas Tuchel hopes Hakim Ziyech’s wonder goal and victory over Tottenham will hand Chelsea renewed confidence following an indifferent run of form as they look to shut down any worries about a top-four Premier League finish.Ziyech’s moment of magic teed up Chelsea’s 2-0 win over Spurs on Sunday, their third victory against their London rivals in this month.Thiago Silva’s header cemented Chelsea’s first league win in five outings since their success at Aston Villa on Boxing Day.Now the bulk of Chelsea’s players can head into a week off satisfied to have reasserted some Premier League authority, with the Blues remaining...
PREMIER LEAGUE・18 HOURS AGO
The Independent

Thomas Tuchel: Chelsea do not have psychological edge over Spurs

Thomas Tuchel has warned Chelsea not to expect a psychological edge over Tottenham after dumping Spurs out of the Carabao Cup.Chelsea will meet Tottenham for the third time this month in Sunday’s Premier League clash at Stamford Bridge.The Blues beat their bitter London rivals 3-0 on aggregate across the two-legged League Cup semi-final, but boss Tuchel has rejected any ideas of a mental advantage.“We have played three matches in such a short time which is pretty unusual and uncommon normally, that is why they know what we do and we know more or less what they do,” said Tuchel.“But it...
PREMIER LEAGUE・2 DAYS AGO
The Independent

Is Chelsea vs Tottenham on TV today? Kick-off time, channel and how to watch Premier League fixture

Tottenham travel to Chelsea on Sunday in the Premier League as the race for the top four places heats up. Spurs can go fourth with a win at Stamford Bridge after their dramatic comeback at Leicester on Wednesday extended their winning run under Antonio Conte. Chelsea are winless in their last four Premier League matches to drop out of the title race. Further dropped points for Thomas Tuchel’s side would see the Blues begin to look over their shoulder. Chelsea vs Tottenham LIVE: Premier League line-ups, build-up, latest score and goal updatesTanguy Ndombele hasn’t been in the best form of...
PREMIER LEAGUE・1 DAY AGO
The Independent

Everton are taking Aston Villa at Goodison Park this afternoon as the Toffees begin life after Rafa Benitez. The Spanish manager was sacked following a dismal run of results which have left them 16th in the Premier League with only five wins all season, and it is down to caretaker manager Duncan Ferguson to arrest the slide while the club searches for a permanent replacement. Villa meanwhile are enjoying life under Steven Gerrard, and victory today would lift them into the top half of the table at least temporarily before this afternoon’s matches. The obvious sub-plot is Gerrard vs Ferguson,...
PREMIER LEAGUE・2 DAYS AGO