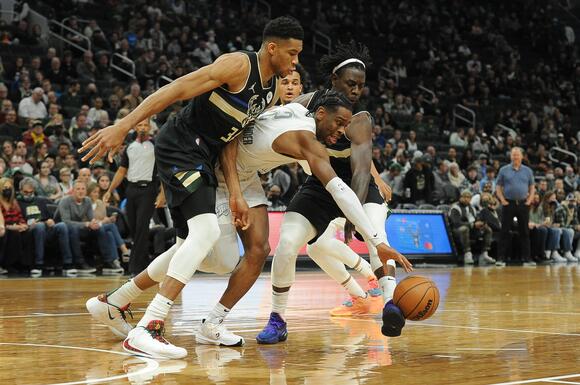 The Milwaukee Bucks got back to .500 and won consecutive games for just the third time this season with a dramatic 96-89 victory over Oklahoma City on Friday night at Fiserv Forum.

The Bucks led by as many as 20 points in the third quarter but had to hold off the youthful Thunder over the final quarter, with Giannis Antetokounmpo hitting a spinning, fading 15-footer with 28.7 seconds left that made it 93-89.

In the win, Khris Middleton moved past Ray Allen for the franchise lead in all-time made three-pointers with his first basket of the game. Middleton now owns both career three-point records (made, attempted) for the Bucks.

“It’s really cool,” Middleton said. “To be No. 1, to pass Ray Allen, one of the best shooters of all time. I’ve still got a ways to catch him in career (threes) but to be No. 1 in franchise is pretty cool. I told Giannis just let me have one record I’m happy about it. To be with this organization for nine years, to be No. 1 in three-point, coming in as just a three-point shooter and was able to expand my game over the years but to have one of my goals achieved here is extremely, extremely cool.”

Allen is currently the NBA’s all-time leader in threes made with 2,973. Middleton, who began his career in Detroit, is currently tied for 110th with 1,068.

Following the return of Middleton from health and safety protocols and their win over the Los Angeles Lakers on Wednesday, Bucks players acknowledged it was time for them to get back on a consistent, winning path. In beating the Thunder (6-9), the Bucks (8-8) alternately looked dominant and disjointed.

They shot 56.5% from the floor in the first quarter and shot 50% in the first half while building leads of 13, 17 and 16 in the first half. After taking the 20-point lead with 4 minutes, 55 seconds left in the third quarter the Thunder outscored the Bucks, 35-22, the rest of the way.

After the hot start, Milwaukee finished the night shooting just 37.3% rom the field and 29.3% from behind the three-point line.

The Bucks improved to 4-0 in games in which Giannis Antetokounmpo, Jrue Holiday and Middleton played. Antetokounmpo scored 21 points, pulled down a season-high 19 rebounds, handed out seven assists, had four blocks and two steals.

Middleton added 16 points and eight rebounds while Holiday had 10 points. Bobby Portis had 17 points and 13 rebounds and Grayson Allen contributed 11. George Hill had 12 off the bench.

Shai Gilgeous-Alexander paced Oklahoma City with 17 points, but shot just 5-for-20 from the field. Three other players reached double figures for the Thunder as all 10 who played scored at least two points.

The Thunder have proven capable of comebacks, though, as they have won four games in which they have trailed by at least 16 points, though after cutting the Bucks lead to just two points on three different occasions over the last eight minutes, they couldn’t take the lead.

“I think we did a good job of when they came close keeping our composure, still executing, still getting open shots.”

Oklahoma City used an 11-3 run to open the fourth quarter to truly get back into the game as Milwaukee’s shooting went cold. The Bucks scored just four points in the first 5:19 of the quarter.

Milwaukee led by as many as 20 points in the third quarter when they opened the frame going on a 16-7 run to lead 74-54. But, the Bucks scored just six points after that and the Thunder shaved the lead to 80-68 at the end of the quarter.

The Bucks led 58-47 at the half, an 11-point margin that felt small considering the fact the home team began the game on a 13-0 run and then went on a 11-0 run later in the first quarter. Milwaukee shot 50% from the field in the first half as well as seven different players scored.

Oklahoma City did fold, however, cutting that early 13-point deficit down to 17-11. Then after trailing 28-11, they cut that margin down to 30-22 with just under two minutes left in the first quarter. The Bucks would take a 34-24 lead into the second quarter, and pushed that margin to 42-26 in the opening minutes.

But again, the Thunder refused to go away with a 14-8 spurt to make it 50-40 before Hill and Antetokounmpo helped the Bucks to an 8-3 run to send the Bucks into the half up 11.

Hill (12 points) and Antetokounmpo (11 points, 6 rebounds) led the team into the break while Allen contributed 11 points as well. Nine of the 10 Thunder players to see court time scored, with Gilgeous-Alexander leading the way with 10 points.

Oklahoma City was coached by Wausau native Dave Bliss as Thunder head coach Mark Daigneault was home awaiting the birth of a child.

The Bucks were without forward Rodney Hood, who was scratched with a right hamstring strain. Hood, a free-agent acquisition at the start of the year, has played in nine games thus far while dealing with foot and hand injuries. He is averaging 3.8 points in 13.3 minutes per game.

Brook Lopez has been out since Oct. 19 with what has been called “back soreness” and while Mike Budenholzer once again did not put a timeline on the center’s return, the Bucks head coach did say, “Brook is making some progress. We’ve always, I feel like, been saying that it’s been steady but maybe not as quick as we’d like. But he’s making progress, he’s doing more and I don’t think there’s a lot more to say than that.”

More: In GQ interview, Giannis Antetokounmpo acknowledges next challenge may not be in Milwaukee

Subscribe to our Milwaukee Bucks newsletter for updates on the team.

Pascal Siakam had 30 points, 10 assists and 10 rebounds for his second career triple-double and the Toronto Raptors overcame an early 15-point deficit to beat the cold-shooting Milwaukee Bucks 103-96 on Saturday night
NBA・2 DAYS AGO
FastBreak on FanNation

The Milwaukee Bucks have three players ruled out for the game against the Atlanta Hawks on Monday.
NBA・1 DAY AGO
95.5 FM WIFC

ATLANTA, GA (WSAU) — The Atlanta Hawks scored 71 points in the second half a rallied over the Milwaukee Bucks 121-114 Monday in Atlanta. The Bucks were up by 12 at the half , the Hawks got it down to three but trailed by five going into the fourth quarter. The Hawks outscored the Bucks by twelve in the final frame for the victory.
NBA・18 HOURS AGO

Giannis Antetokounmpo won’t explicitly say that the Miami Heat won a Mickey Mouse conference title in 2020, but that seems to be what he thinks. The Milwaukee Bucks star was interviewed this week by The Athletic’s Eric Nehm. In the interview, Antetokounmpo spoke on the 2020 Orlando bubble and dissed the Heat, who beat the Bucks in the second round that year.
NBA・2 HOURS AGO
Chicago Tribune

It doesn’t get any easier for the slumping Chicago Bulls. 4 things to watch for this week with the improved Cleveland Cavaliers and Milwaukee Bucks on deck.

More than halfway through the 2021-22 season, the Chicago Bulls should be more than satisfied with their vast improvement from a year ago. Few would’ve guessed they would be 12 games over .500 and tied for first place in the Eastern Conference after 42 games. Or that executive vice president of basketball operations Artūras Karnišovas and coach Billy Donovan would be in the running for two of ...
NBA・3 HOURS AGO
fadeawayworld.net

The last three past NBA seasons have been incredible for Giannis Antetokounmpo, who has collected plenty of silverware thanks to his impressive performances on the court. The Milwaukee Bucks superstar leaves his everything on both sides of the court, becoming one of the premier names in the NBA. Right now,...
NBA・6 HOURS AGO
Yardbarker

The Brooklyn Nets have barely had their “Big Three” on the floor together since they assembled what they thought would be a championship roster, and one of their superstar players is reportedly open to the idea of moving on. NBA reporter Marc Stein wrote on Monday that sources...
NBA・1 DAY AGO

Kyle Kuzma threw down a huge dunk on Joel Embiid during the game between the Philadelphia 76ers and Washington Wizards on Monday afternoon.
NBA・1 DAY AGO
Sportsnaut

Bookmark. Save. Do your thing. We will be providing constant updates on this page as it relates to the biggest
NBA・5 HOURS AGO
fadeawayworld.net

The Los Angeles Lakers were a hot destination in free agency. Over the summer, multiple players flocked to the team to chase a title alongside LeBron James in the NBA's biggest market. But since the start of the season, things have been less than ideal for the Lakeshow. Through the...
NBA・2 DAYS AGO
Sportsnaut

Ja Morant and the Memphis Grizzlies defeated the Chicago Bulls on Monday afternoon.
NBA・1 DAY AGO
FastBreak on FanNation

Cade Cunningham was ejected during the game between the Phoenix Suns and Detroit Pistons on Sunday afternoon in Michigan.
NBA・2 DAYS AGO
FastBreak on FanNation

Kyrie Irving on getting vaccinated: “I’ve made my decision already and I’m standing on it.”

There has been hope in Brooklyn that Kyrie Irving, back in the fold and playing games with teammates, would have a change of heart on getting vaccinated so he could play in home games, not just road games. Irving himself seemed to leave that door ajar. Monday, Irving slammed the...
NBA・1 DAY AGO
fadeawayworld.net

Trae Young and the Atlanta Hawks started this season by absolutely dominating Luka Doncic and his Dallas Mavericks in the first game. Things were looking great for the 2021 Eastern Conference finalists and it looked like they would have another successful season. However, things fizzled out and they went 3-5 in their next 8 games after the win.
NBA・2 DAYS AGO
FastBreak on FanNation

Rajon Rondo has been ruled out for Monday's game between the Brooklyn Nets and Cleveland Cavaliers.
NBA・1 DAY AGO
Sportsnaut

MINNEAPOLIS -- — Karl-Anthony Towns had 26 points and 11 rebounds to lead the Minnesota Timberwolves to a 119-99 victory over the worn-out Golden State Warriors, who played without Steph Curry and Draymond Green on Sunday night. Jaylen Nowell scored 17 points and Malik Beasley added in 16 with...
NBA・1 DAY AGO