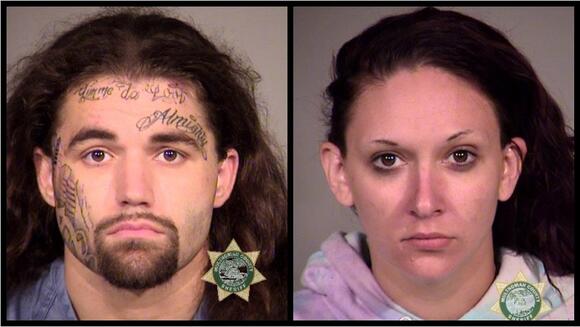 PORTLAND, Ore. (KOIN) — A man and a woman, believed to still be together, are wanted for a shooting last Saturday that left a bullet in a PPB patrol car.

Christian Daniel Fitz-Henry and Alicia Marie Misner were publicly identified Friday by investigators looking into the incident in Northeast Portland.

On November 13, police tried to stop a car at NE 92nd and Halsey because they believed there was a wanted suspect inside. The driver hit the gas instead and tried to outrun police. Spike strips soon flattened their tires and they stopped near NE 104th and Halsey.

Shots were fired, one bullet hit the PPB side view mirror and the pair managed to escape the perimeter set up.

Fitz-Henry and Misner, each 27, are wanted for a variety of charges.

Authorities believe Fitz-Henry was the passenger in the car. He’s wanted for attempted murder and unlawful use of a weapon, plus a parole board warrant for robbery. He’s white, 5-feet-9, 160 pounds with brown hair, brown eyes and facial tattoos.

Misner was driving the stolen car, officials said. She is wanted for possession of a stolen car and an attempt to elude, plus an outstanding parole violation for assault. She is white, 5-feet-8, 125 pounds with brown hair and brown eyes.

Both are considered armed and dangerous “and represent a substantial threat to the public and law enforcement,’ police said. Anyone who spots them should stay away and call 911, officials said.

Christopher Raymond Fox-Southard, who has a previous felony conviction on his record, was sentenced Tuesday to 40 months in prison plus 3 years of supervised release.
PORTLAND, OR・23 HOURS AGO
KOIN 6 News

A Keizer man who was arrested Saturday after he plowed through a home and killed a woman, was also convicted six years prior for killing his brother in a drunk driving crash, according to the Statesman Journal.
KEIZER, OR・1 HOUR AGO
KOIN 6 News

Police are offering a reward for help in solving the deadly New Year’s Day shooting of an uncle and nephew in the Argay Terrace neighborhood.
PORTLAND, OR・5 HOURS AGO
KOIN 6 News

The man found dead following a shooting very late Sunday night was publicly identified as a 29-year-old resident of Clackamas.
PORTLAND, OR・20 HOURS AGO

According to the U.S. Attorney's Office in Portland, Anthony Wayne Dewey, 60, was sentenced to 27 years in federal prison followed by a life term of supervised release.
COLUMBIA COUNTY, OR・20 HOURS AGO
KOIN 6 News

‘Shaken to the core’: Woman wants husband’s ashes back

When Karin Bishop came home from work on January 19, "nothing was right. Everything was off when I walked in."
ALOHA, OR・1 DAY AGO
KOIN 6 News

It's been more than 20 years since Kacey Ann Perry went missing in Portland.
PORTLAND, OR・1 DAY AGO

Beaverton police are looking for suspects after people broke into St. Cecilia Church Sunday night and stole a delivery truck used for food pantries.
BEAVERTON, OR・16 HOURS AGO
KOIN 6 News

Authorities in Clark County in Washington are asking for the public's help after a man was killed in a hit-and-run crash involving a stolen truck, with the suspect fleeing on foot.
PORTLAND, OR・1 DAY AGO
KOIN 6 News

A suspect was arrested following a hit-and-run in the Parkrose Heights neighborhood involving a stolen vehicle Monday morning, police said.
PORTLAND, OR・2 DAYS AGO
KOIN 6 News

A 67-year-old man was killed in a two-vehicle crash on Highway 18 near Grande Ronde Monday night, officials said.
PORTLAND, OR・1 DAY AGO

A woman was arrested hours after a fire charred the Gresham Chamber of Commerce Visitor Center and Walker Travel, police said.
GRESHAM, OR・2 DAYS AGO
KOIN 6 News

The wrestling coach at Skyview High School in Vancouver, Washington, is out after his arrest on suspicion of assault.
VANCOUVER, WA・1 DAY AGO
KOIN 6 News

A driver will face a number of charges after a series of hit-and-run crashes in Vancouver that endangered pedestrians, damaged 2 parked cars, 2 retaining walls, a light pole, a garage door and a house.
1 DAY AGO
KOIN 6 News

An altercation at a Connecticut smoothie shop involving a father reportedly upset over his child's allergic reaction was caught on video over the weekend and has gone viral.
FAIRFIELD, CT・2 DAYS AGO

A caller told the Sheriff's Department that the man was pushing kids and "poking heads into vehicles."
LA CRESCENTA-MONTROSE, CA・1 DAY AGO
KOIN 6 News

The overall case count now stands at 597,172. The death toll rose to 5994 with the announcement of another 41 COVID-related deaths.
MULTNOMAH COUNTY, OR・21 HOURS AGO
KOIN 6 News

The Beaverton School District said the driver shortage has forced supervising staff to hop behind the wheel and could result in 90 minute delays for some students.
PORTLAND, OR・23 HOURS AGO